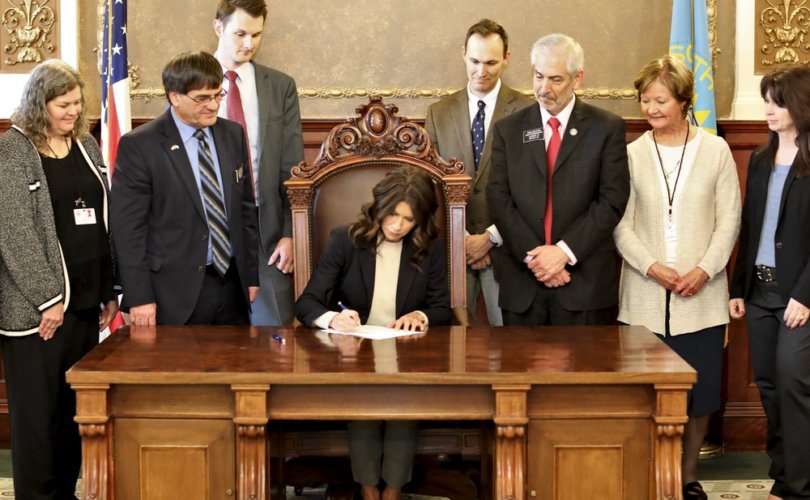 “The pro-life cause continues even after a child is born,” Gov. Noem announced upon signing House Bill 1051. “Today, I signed Born Alive legislation to guarantee the right to life for every baby that is born alive.”

HB 1051, also called “An Act to maintain the life of any child born alive,” mandates that medical professionals provide the same level of medical care to all babies, including those who survive botched abortions.

“The same means and medical skills and treatment provided a child born alive… must be employed and provided to every child born alive immediately following an abortion or an attempted abortion,” the bill reads.

“This obligation applies to every physician who performs or attempts to perform an abortion that results in a child being born alive,” it continues. “Such physician has a physician-patient relationship with that child under the laws of this state, with all of the duties that attend that relationship.”

The law also includes sanctions for violators and new reporting requirements for facilities or physicians that commit abortions.

The South Dakota legislature overwhelmingly approved HB 1051, with bipartisan support for the bill in both chambers. It resembles similar legislation passed by Kentucky lawmakers and signed by pro-abortion Gov. Andy Beshar (D) in January.

“This bill will guarantee the right to life for every baby that is born alive,” Gov. Noem said in another statement on Wednesday. “We expect doctors to treat all children equally, even those born in horrific circumstances. That’s basic human decency.”

“Under Governor Noem, South Dakota is a national leader in protecting innocent children – born and unborn. The overwhelming majority of Americans agree: Babies who survive abortions deserve the same compassion and care as any other infant, regardless of the circumstances of their birth,” said Marjorie Dannenfelser, president of the Susan B. Anthony List, a national pro-life group.

“Astoundingly, radical Democrats in some states and in Congress refuse to support legislation to protect these vulnerable little ones from being killed or left to die,” Dannenfelser continued.

Democratic legislators consistently oppose popular, life-saving protections for living babies born after abortions, with congressional Democrats blocking a federal born-alive bill for years. All but two Democratic senators voted against a born alive amendment during the budget reconciliation process for the COVID-19 relief bill that passed earlier this month.

According to the U.S. Centers for Disease Control (CDC), up to 588 infants died following failed abortion attempts, sometimes days after the procedures, between 2003 and 2014. The CDC admits that that number may be an undercount.

“We know it is an underestimate because these are just reported numbers from hospitals, not abortion facilities. Kermit Gosnell is only one abortionist who was responsible for ‘hundreds of snippings’ of born-alive babies, yet he did not report even one. His numbers alone exceed the ‘definitive’ numbers of the CDC,” congressional testimony has noted.