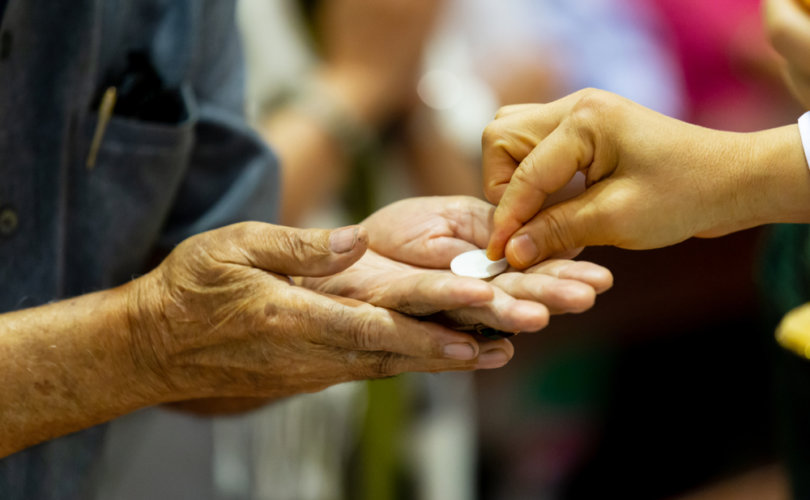 MANILA, Philippines, February 5, 2020 (LifeSiteNews) ― Bishops in southeast Asia have banned the traditional method of receiving Holy Communion in the belief that this will help stop the spread of coronavirus.

Last week, the Catholic Bishops’ Conference of the Philippines (CBCP) sent a letter to all of its dioceses with instructions for greater hygiene during liturgies. Penned by the CBCP Secretary-General Fr. Marvin Mejia, the letter instructs Catholics to receive communion in the hand.

“The communion in the hand (must) be practiced ordinarily to help prevent further fear from people who are reasonably cautious about this matter,” Mejia wrote.

Filipino Catholics are also discouraged from exchanging the sign of peace and holding hands while reciting the Our Father. Bishops asked parishes to empty and refill holy water stoups regularly and to fasten “protective cloth” over the grilles of confessionals.

Meanwhile, the CBCP ordered special prayers for the sick and against the disease.

The Archdiocese of Singapore published extensive information and advice about coronavirus on its website. In a section specifically dedicated to disease prevention at Mass, it stated that “Holy Communion is to be received only on the hand till further notice.”

“Communion from the chalice is to be suspended till further notice,” it added.

The Archdiocese also banned hand-holding in church and took the opportunity to remind the faithful that they aren’t really supposed to be joining hands at the Our Father prayer anyway.

“It is also to be noted that liturgical laws have consistently not allowed the holding of hands during the Lord’s Prayer during Mass,” it stated.

Meanwhile, Catholics were instructed to stay home when they are sick and not to participate in Mass or other church activities. They were assured that they are exempted from their Sunday obligation.

The guidelines for the Archdiocese of Singapore were first published on January 24.

In a blogpost dealing with the interdict on the traditional manner of distributing communion, Fr. John Zuhlsdorf reminded readers that communion on the hand is strictly forbidden at the Extraordinary Form of the Mass.

“Firstly, it is not allowed to distribute Communion in the hand during the Traditional Latin Mass or when using the Rite for Distribution of Communion outside of Mass, or during sick calls with the older Rituale Romanum. Also, in the older Rite, Communion is not distributed under both kinds,” he wrote.

“Distribution of communion in the hand would be a serious liturgical abuse, precisely because it deals with the Eucharistic species.”

Regarding the reception of communion at the Ordinary Form of the Mass, the blogger-priest reminded his readers that they are not bound to receive communion every time they go to Mass.

“If you are dead set against receiving on the hand, period, then don’t even go forward. Don’t make a scene at the communion rail. Make a spiritual communion,” Zuhldorf advised.

He also encouraged those who are ill to stay home from Mass.

“If you are ill or infectious or contagious then you don’t have an obligation to go to Sunday Mass,” Zuhldorf wrote.

“While it might be laudable from your perspective to offer up the discomfort and make the effort, it might be a violation of both prudence and charity.”