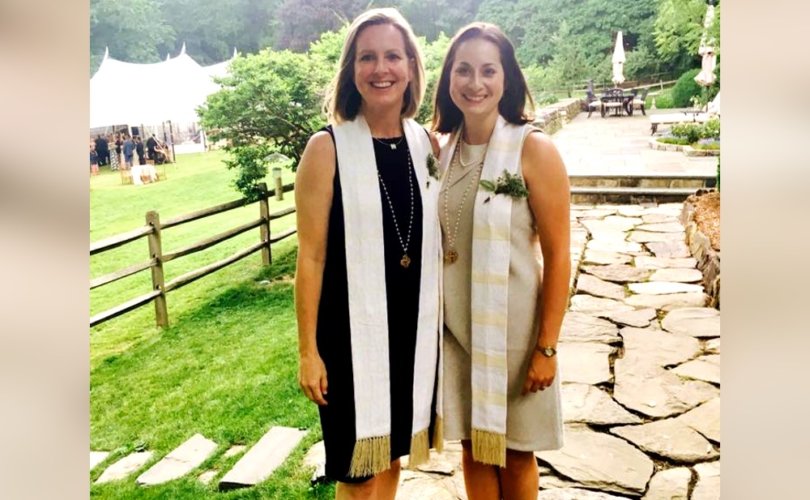 Explicit wording from the committee left no misunderstanding of the reason: The DCBC must “secure…the removal of any churches from its fellowship that have demonstrated a faith or practice affirming, approving or endorsing homosexual behavior.”

The only other alternative the SBC offered was to lead Calvary Baptist Church to “repentance” for giving approval to homosexuality through the hire. Since the 1990s, the SBC officially severs ties with any congregation that “act(s) to affirm, approve or endorse homosexual behavior.”

The committee has given DCBC ninety days to do so, or else the SBC will break with the DCBC, including monetary support of charitable projects.

The DCBC sought to downplay Calvary's hiring of lesbian pastors. “Calvary's actions do not reflect on the D.C. Baptist Convention,” Executive Director Robert Cochran said.  He reminded a group from the SBC Executive Committee that the Apostle John “never cut ties to any of these seven congregations [in Revelation], despite their shortcomings.”

Breaking the century-old tie “was a decision that there's no doubt we needed to make,” SBC Executive Committee chairman Stephen Rummage said, but it was “made with great sadness.”

Baptists believe in congregational governance, not a hierarchy, and individual churches may band together in cooperative “associations.”  Calvary Baptist in the nation's Capitol is aligned with the SBC as well as several other groups including the American Baptist Churches USA (formerly the “Northern Baptist Convention,” so-called after the country's largest group of Baptists split over slavery), the largely African-American Progressive National Baptist Convention, and the Alliance of Baptists.

American Baptist Churches USA is far more liberal than the SBC, calling homosexual behavior incompatible with Christian teaching but officially open to “a variety of understandings” on homosexuality.

A 2004 statement of the Alliance of Baptists reads, “We affirm that the Alliance of Baptists supports the rights of all citizens to full marriage equality.”  Director of Partnership Relations Paula Clayton Dempsey explained, “In 2014, we joined the United Church of Christ in a lawsuit against the state of North Carolina around the issues of religious liberty and same-sex marriage.”

The ninety day grace period was the idea of Rev. Joseph Lyles of Maryland.  “We're trying to extend the olive branch, and I think it was received,” he explained, adding that the committee was “kind and considerate to try to bring about redemptive restoration.”

Calvary hosted the “Clergy Call” of the gay activist group Human Rights Campaign to lobby for pro-homosexual legislation.  Before hiring the lesbian couple, the congregation appointed a transgender man as its interim pastor.  Before that, Calvary's senior pastor was a woman.

Jeff Walton of the Institute on Religion & Democracy pointed out to the Christian Post that Calvary's membership has dwindled from thousands to less than 300.

The SBC Executive Committee resorted to the call for disassociation after year-long attempts to help the DCBC correct Calvary proved “unfruitful.”