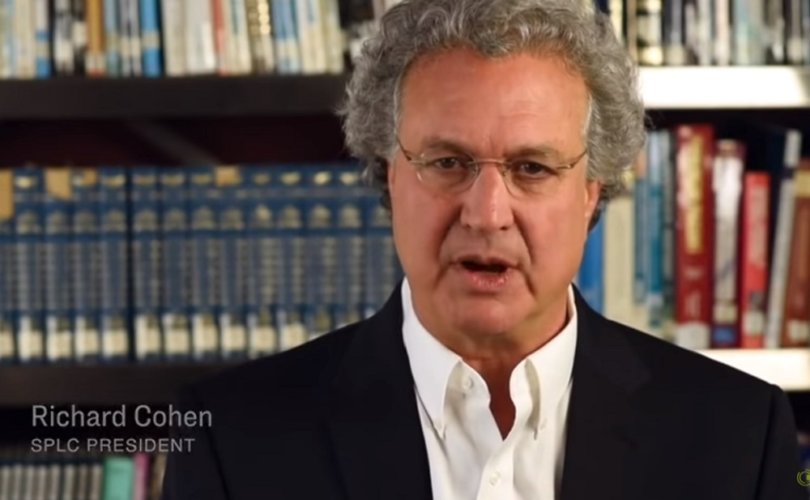 March 25, 2019 (LifeSiteNews) — The crisis at the Southern Poverty Law Center (SPLC), an organization criticized for smearing Christian pro-family organizations as “hate groups,” deepened on Friday when the center’s president, Richard Cohen, announced his upcoming resignation to staff in an email.

“Whatever problems exist at the SPLC happened on my watch, so I take responsibility for them,” Cohen reportedly wrote, adding, “in light of recent events, I’ve asked the board to immediately launch a search for an interim president in order to give the organization the best chance to heal.”

Cohen’s email apparently refers to the recent firing of a co-founder of the SPLC, Morris Dees, who represented the organization to the public and functioned for many years as its chief counsel. Although the SPLC did not publicly state the reason for Dees’s firing, his ouster followed the writing of a letter to management and the board of directors expressing concern about internal “sexual harassment, gender discrimination, and racism,” all of which the SPLC purportedly exists to combat.

Cohen’s resignation plans raise the tally of resignations and firings in the last month to four. In addition to Dees’s firing and Cohen’s upcoming departure, the SPLC’s legal director, Rhonda Brownstein, submitted her resignation last week, and her deputy legal director, Meredith Horton, also stated that she would be leaving the organization, according to the New York Times.

The SPLC has added to the speculation about the motives for the firing and resignations by refusing to specify the reasons for the changes, which appear to be related to recent complaints about racism and sexual harassment in the outfit. Although the organization has generated hundreds of millions of dollars in donations by positioning itself as the principal watchdog group for racist organizations and other “hate groups,” it has been accused of hiring few non-whites in its “lavishly compensated” and dictatorial leadership. Such practices have led a former staffer to conclude that the organization is in many respects “a highly profitable scam.”

Dees has long been accused of racially discriminatory practices at the SPLC. As early as 1994, the Montgomery Advertiser ran a series that alleged that black employees of the outfit were suffering from discrimination. The Advertiser reported that staff “accused Morris Dees, the center’s driving force, of being a racist and black employees have ‘felt threatened and banded together.’” Both the SPLC and Dees have denied such accusations, and Dees has stated that he doesn't know why he was fired.

The series, which was nominated for a Pulitzer Prize, led the Advertiser’s managing editor, Jim Tharpe, to call on the IRS and Justice Department to investigate the SPLC.

The SPLC’s attempts to tag groups opposing liberal ideology as “hate groups” have caused trouble for the organization in recent months. The SPLC was successfully sued by a Muslim it had called an “anti-Muslim extremist,” Maajid Nawaz, for opposing radical forms of Islam. The SPLC agreed to pay Nawaz’s organization, the Quilliam Foundation, $3.4 million. It also removed the SPLC’s “field guide to anti-Muslim extremism” and its corresponding list of groups and replaced it with a public apology to Nawaz and Quilliam.

The SPLC is currently being sued by at least two others that have been placed on its “hate” list: the Center for Immigration Studies and Gavin McInnes, founder of the “Proud Boys.” Both say they have suffered damages to their reputation as a result of being falsely labeled as advocates of “hate,” when in fact they do not advocate hatred of anyone.

The SPLC recently has listed a large number of Christian and pro-family organizations as “hate groups” for opposing the LGBT political agenda. These include even large and eminent organizations such as the Alliance Defending Freedom (ADF), the Center for Family and Human Rights (C-FAM), the Family Research Council (FRC), Liberty Counsel, the World Congress of Families, Dr. James Kennedy Ministries, the Ruth Institute, and Church Militant.

The SPLC harms the reputations of such groups by mixing them in a more general list of organizations that include true hate groups such as the Ku Klux Klan and neo-Nazi organizations. Its “hate map” of such groups is widely republished by major media outlets and is used by corporate entities such as PayPal to eliminate groups from their service.

The listing has even been linked to an act of terrorism against a pro-family group. After the Family Research Council was placed on the SPLC’s list of anti-LGBT “hate groups,” in 2012, an angry leftist attempted to enter the FRC’s headquarters and murder its personnel. Floyd Lee Corkins’s assault was stopped by the heroic actions of security guard Leo Johnson, who was wounded in the process of disarming him. Corkins later said he initially found the FRC on the SPLC’s hate group listing.

“Southern Poverty Law lists anti-gay groups,” Corkins later told investigators in explaining how he zeroed in on the FRC. “I found them online, did a little research, went to the website, stuff like that.” According to the Washington Examiner, Corkins later said at his trial that he was seeking to “kill as many as possible and smear the Chick-Fil-A sandwiches in victims’ faces, and kill the guard.”

In what may be a response to accusations of anti-Christian bias at the SPLC, the Department of Defense has recently eliminated SPLC material from its training materials, and the FBI has distanced itself from the group, although it still reportedly uses it as a resource.