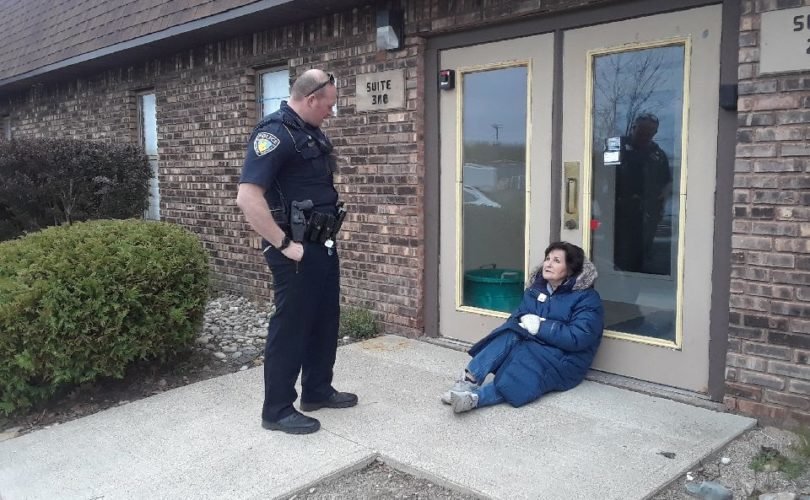 SAGINAW, Michigan, April 16, 2021 (LifeSiteNews) — Two pro-life activists, including a former inmate of a communist concentration camp, were arrested this morning for blocking the doors to an abortion mill in Saginaw, Michigan.

“Our purpose was simply for those babies there today,” said Heather Idoni, who had stretched herself out to block an entrance to the Women’s Center of Saginaw and Flint, along with Eva Edl, a concentration camp survivor who blocked the other doorway.

“We held it for about an hour from eight to nine. They said there were six cars that didn’t turn in at all, (who) tried to and then just decided not to when they saw the police,” Idoni told LifeSiteNews.

“Usually (women are) pouring in, and they weren’t. You could tell there were a lot of turnaways, which was good. We just trust God that hopefully there was at least one saved,” said Idoni.

Idoni, who does pro-life sidewalk counseling, explained the meaning of a “rescue.” “We get to do really everything we can possibly do to prevent the babies from being murdered. For me, it feels like I’m doing the most I can do.”

She described it is a “loving act of saying, ‘Little baby, I tried, I tried, I did everything I could that day to stop your murder.’”

— Article continues below Petition —
PETITION: Support Archbishop Naumann's defense of LIFE as head of Bishops' Pro-Life Committee
Show Petition Text
25848 have signed the petition.
Let's get to 30000!
Thank you for signing this petition!
Add your signature:
Show Petition Text

Idoni started doing rescues 30 years ago but took a hiatus after she had children.

“I had five sons naturally, and I say I have 10 sons supernaturally, because we adopted 10 sons from the Ukraine,” said Idoni.

During the time Idoni and Edl blocked the abortion mill, only two women were able to go inside. The first time was because the facility manager “shoved the door” where Edl, who is almost 86 years old, was sitting. Edl “did not get hurt, praise God for that,” explained Idoni.

“She is an amazing woman. She was a survivor of a communist concentration camp in Yugoslavia. Her family was Catholic at the time. The communists from Russia were coming through to round up any Germanic peoples. She was nine years old, and her family was taken away to the death camps. She was nearly starved to death when her mother escaped from a different camp and rescued her,” she continued.

“Eventually they were able to make it to America. It’s been on her heart to fight against abortion since then. Since rescues were becoming a thing a little over 30 years ago, she started rescuing. This was her 51st arrest.”

“I was blessed that Eva came up from South Carolina to rescue with me. She says that she wished that someone would have given their life – if 700 people sat on the railroad track blocking the train from going to the death camp, she said if someone had been on the track for me, shown love for me that day … then, it means just the world to her to do this for the babies,” said Idoni.

“An officer convinced Eva that only he was going to go in and talk to the business owners and she allowed him to go in and at the same time he let a mother in. So she told him, ‘you are responsible for this murder now.’”

Idoni revealed that she and Edl were treated “very well” at the Saginaw County jail. They were charged with a criminal trespassing misdemeanor.

“They got us out as fast as they could on a signature bond,” she said.

A sign that Idoni and Edl brought to the abortion mill reads: “We are here in peaceful defense of the lives of pre-born children. We are not protesters! Does the firefighter race to a fire to protest the fire? No, but to save endangered lives and put out the fire.”