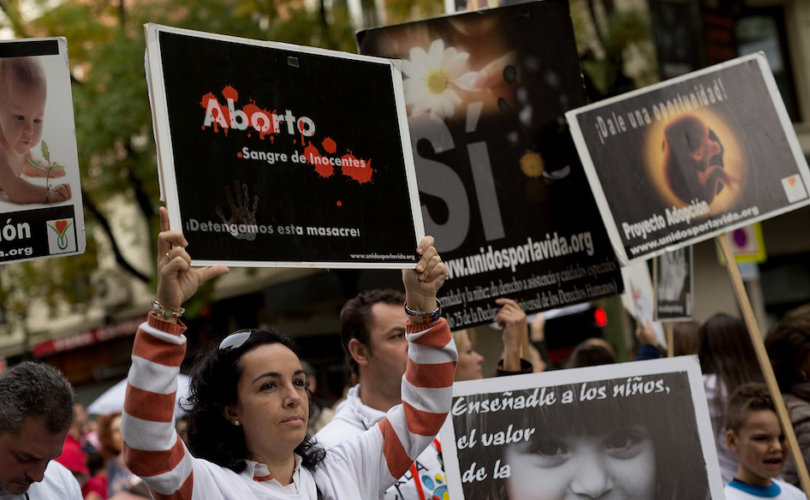 MADRID, SPAIN - NOVEMBER 22: A protester holds a placard reading 'Abortion. Blood from innocent. Let's stop this massacre' during a pro-life rally against abortion under the slogan 'Every life matters' on November 22, 2014 in Madrid, Spain. Thousands of people from around Spain gathered today in Madrid to protest against abortion and show their disagreement with the Popular Party. (Photo by Pablo Blazquez Dominguez/Getty Images)Pablo Blazquez Dominguez/Getty Images

MADRID (LifeSiteNews) – The Spanish senate has adopted a bill that will amend the Spanish penal code to criminalize pro-life gatherings near abortion clinics.

The bill was passed Wednesday with 154 votes in favor and 105 against.

Its aim is to criminalize pro-life gatherings or activism in front of abortion clinics, which the bill described as “harassing women going to clinics for the voluntary interruption of pregnancy.”

The law is expected to come into effect after its publication in the Official State Bulletin this weekend.

When it does, pro-lifers who gather in front of abortion clinics in an effort to dissuade women from terminating the life of their unborn babies could be liable to jail sentences of three months to a year, or community service from 31 to 80 days.

In addition, the new law also states that “depending on circumstances,” individuals could also be barred from certain locations for a period of six months to three years.

The proposal was introduced in May 2021 by the Spanish Socialist Workers’ Party’s coalition (PSOE) and cites a 2018 report from the Association of Accredited Clinics for the Termination of Pregnancy (ACAI), which claims that “thousands of women have been harassed, insulted, coerced or threatened in some way” by pro-life groups gathered near abortion clinics.

“These organized groups accost women with photographs, model fetuses, and anti-abortion slogans before they enter the clinic. The aim is to make the women change their decision through coercion, intimidation, and harassment,” the bill reads.

The socialist parliamentary group behind the bill also said it “considers it essential to guarantee a safety zone” near abortion clinics.

The new law is similar to the so-called “buffer zone” bills which have been pushed by pro-abortions politicians and lawmakers in various countries in recent years; the latest example of which being the bill recently passed in Northern Ireland, which also makes it a criminal offense for pro-life people to offer abortion-minded women alternatives near abortion clinics.

Among three parties which opposed the bill was Spanish nationalist party Vox, which has vowed to appeal to the Spanish Constitutional Court on the grounds that the new law violates freedom of expression and assembly.

Jacobo González-Robatto, a member of Vox, challenged the expression “termination of pregnancy” used in the bill to refer to abortion, saying it was “a clear example of the absolute manipulation of language” because “to abort is to kill, it’s to end the life of a human being.”

González-Robatto also described the work of pro-lifers gathered near abortion clinics as “the last chance for the mothers and their children.”