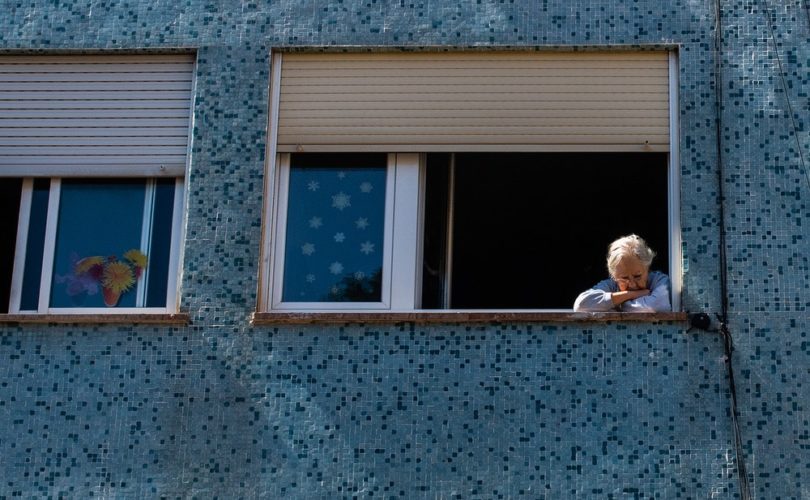 An elderly woman looks on from her window on April 26, 2020 in Barcelona, Spain. Spain had one of the stricter lockdowns in Europe. David Ramos / Getty Images

SPAIN, July 16, 2021 (LifeSiteNews) – Following a recourse by Vox, a popular conservative movement, Spain’s Constitutional Tribunal has judged that the first COVID-19 confinement in the country was illegal and unconstitutional and that the “fundamental rights” of Spanish citizens were violated by government measures against the sanitary crisis, even though they had been approved by successive votes in Parliament.

Vox and the Partido Popular both called on the government to step down after the decision.

The decision was made public by the court on Wednesday after a 6 to 5 vote by the Tribunal’s supreme judges, who have theoretically opened the way for all those who were fined for not complying with the severe confinement rules to ask for a refund of their money.

All fines that have not been paid are annulled by the decision, as well as penal procedures against those who did not comply with lockdown measures, but the Tribunal decided to protect the authorities from massive refund claims for fines by ruling that “citizens have the juridical duty to endure the material damages they have undergone,” which is curious, to say the least. Other sanctions can be revised, though.

Vox, not content with being the only political group in Parliament that consistently fought for citizens’ rights throughout the COVID crisis, is also responsible for this major victory, since it was Vox that took the matter to court, forcing the constitutional judges to disavow the socialist-communist government’s actions against the Spanish population last year.

A press statement released Wednesday by the Constitutional Tribunal revealed that the major grievances presented by Vox had been taken into account. The Royal Decree of March 14 setting up a “state of alarm” because of the “sanitary crisis” was declared null and void in several of its dispositions.

“The first of these points is the one that regulated the confinement, and therefore restricted the ability of citizens to move in terms that the Constitutional Court has considered contrary to the Magna Carta itself. This section stipulated that citizens could only circulate ‘on public roads or spaces’ for essential activities, such as the purchase of food and basic necessities, travel to health centers or to places of work that were still operational due to their nature and importance,” noted El País.

Three fundamental rights were involved: the right to free movement within the territory, the right to choose one’s place of residence – by preventing travel – and the right of assembly among individuals, by prohibiting all social gatherings, even with relatives.

Pending the publication of the full decision, which is expected to be online “within the coming days” according to the statement, the Spanish press has widely commented on the spectacular victory. But the victory came “too late,” according to Vox leader Santiago Abascal. At a press conference following news of the Constitutional Tribunal’s decision, he said the political movement he leads “cannot celebrate the ruling because it demonstrates that the Government is prepared to disregard the law and to trample the Constitution.”

Speaking of the “worst violation of Spanish citizen’s rights and liberties throughout our history,” he recalled that Vox was the only movement in Parliament to vote against the particularly severe confinement rules set up by a government that was able to rely on the “complicity” of all the other parties who approved them six times running, leading to more than seven weeks of suspension of fundamental freedoms. Abascal also recalled that the government always professed to be acting within the limits of the Spanish constitution, which has now been revealed to be untrue.

Vox’s arguments against the measures were ridiculed at the time both by the mainstream media and the established political parties. It claimed that the degree of suspension of freedoms imposed by the authorities was not compatible with a “state of alarm” or emergency decreed by the government and merely approved every two weeks by Parliament, but could only have been set up under a “state of exception” in which the Congress of Parliament would have been competent to take the decision and circumscribe both measures and sanctions, in particular the maximum rate of fines for those who would not comply. Only a limited list of fundamental constitutional rights could be restricted for a maximum of 30 days in such a “state of exception.”

In other words, the government could not unilaterally impose restrictions by the equivalent of “executive orders” and later have them approved by Parliament without clearly setting up a “state of exception,” but should have presented its plan to the Lower Chamber and allow it to be debated. The ruling made evident that the government acted autocratically, without regard for the people’s representatives.

Abascal also remarked that the ruling came at the wrong time, and “grudgingly.” If another party than Vox had challenged the government’s decision, he said, the Tribunal would probably have unanimously condemned the government; the fact that it did not, he said, showed that it had acted as a political formation.

According to the conservative daily ABC, the eleven members of the Tribunal (the twelfth being at present suspended because of his implication in a case of “gender violence”) indeed voted according to their personal political affinities. The daily also noted that the Tribunal considered that “freedom of circulation” was not only “limited” during the confinement, but “suspended” indiscriminately.

The ruling also made clear that the government could not legally allow the Health Ministry to extend or reduce restrictive measures as listed in the original Royal Decree; this was also declared illegal and unconstitutional.

The Spanish government, led by socialist Prime minister Pedro Sanchez, has expressed “surprise” at the Tribunal’s ruling; Sanchez stated that “all countries in the world” had used similar measures to fight the coronavirus. But this works both ways, since Spain’s ruling could on the contrary underscore the fact that personal freedoms and fundamental rights have probably been illegally suspended in many other countries.

In comments sent to LifeSite by e-mail, Francisco José Contreras, member of Congress for Vox and a professor of constitutional law, stated: “Vox opposed the state of alarm from the first time it was extended: it warned from the start that it was a covert state of exception. We consider that the ruling of the Constitutional Court is a tremendous moral slap in the face of this government, which should resign and call elections.”