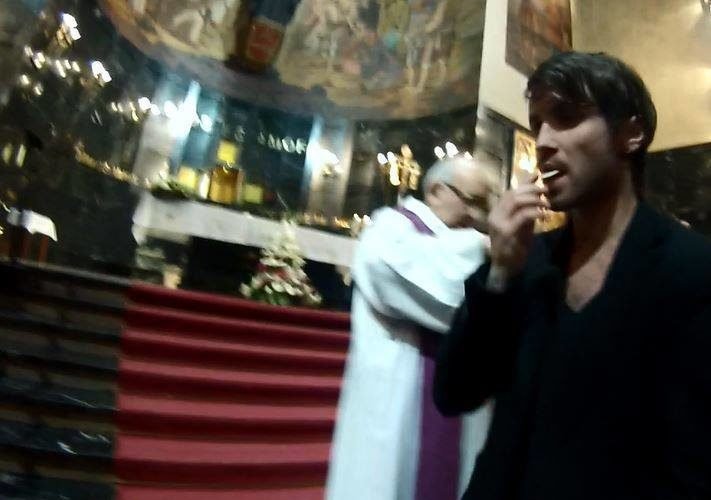 PAMPLONA, Spain, November 26, 2015 (LifeSiteNews) – Spanish performance artist Abel Azcona has stolen 242 Communion hosts from Catholic churches and used them to write the word “pederasty” on the floor as part of his latest show. Azcona has admitted to stealing the hosts while pretending to receive Holy Communion during different masses.

“I attended 242 eucharists (sic), and with the hosts I made the word pederasty,” wrote Azcona on his Twitter account. Pictures of the moments he took the hosts out of his mouth are posted on Azcona’s Facebook profile.

During opening night last Friday, a crowd of faithful Catholics entered the building where this piece was being shown and kneeled down to pray the Rosary in front of it. They ended the prayer by chanting “Viva Cristo Rey (Long live Christ King).” Azcona called it a “fantastic performance.”

“If this is not a performance, may God come and see it,” he wrote on his Facebook page.

The “art piece” consists of pictures showing the process the artist went through: stealing the hosts during Mass, using them to form a word on the floor and then sitting naked next to them. A cup full of some of the consecrated hosts is also in exhibition.

As Azcona’s exhibition is being shown in a government venue, maslibres.org, an online platform for religious freedom in Spain, started a petition addressing Pamplona’s mayor. “You have not been elected by the citizens of Pamplona so that the money of those who put you in charge for a few years may be used to attack their own rights,” it reads.

On November 23, crowds summoned by maslibres.org gathered outside City Council to peacefully protest. In the end, the mayor gave a public speech in which he addressed Azcona and asked him to “reconsider” the inclusion of “some of the contents” in his exhibition as “they have provoked the rejection of part of the population,” and in order to “favor a climate of harmony and not hurt any sensitivities.”

The Spanish Association of Christian Lawyers also started started an online petition on change.org, asking Pamplona’s City Council to withdraw the “art piece” from the show and charge the artist with “explicit desecration” and an attack on “religious sentiments,” which in Spain carries a penalty of 12 to 18 months in prison.  The petition has reached over 100,000 signatures in less than a week.

Pamplona Archbishop Mons. Francisco Perez has called for reparation Masses throughout his diocese. “It is blasphemous sacrilege,” he said in interview with Alfa y Omega. “He has disdained, devaluated and ridiculed the Eucharist, which is the real presence of Jesus Christ in the sacred host and the most holy thing for a Catholic.”

Azcona mocked the archbishop’s proceedings by writing on Facebook: “We can all rest peacefully now (…), masses in reparation and against my sacrilegious exhibition. Everything is solved. Praise be to God.”

Reports indicate that an unknown citizen has now stolen the consecrated hosts from the show and taken them to a nearby parish. “They have stolen part of an art piece,” Azcona wrote on his Facebook page, “which will be replaced with more consecrated hosts, as only 12 of the 242 stolen where there,” referring to the cup holding the hosts.

According to the daily Diario de Navarra, Azcona is pressing charges for theft.