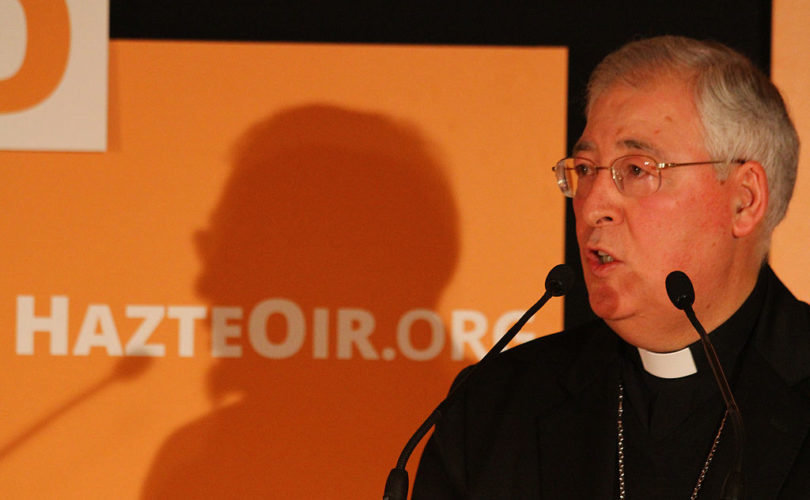 The bishop was sued in 2012 over his remarks on homosexuality, but remains undeterred.Wikimedia Commons

Bishop Juan Antonio Reig Pla of the diocese of Alcalá de Henares is once again earning himself the ire of Spain's radical gay rights movement for preaching the Catholic Church’s teachings on homosexuality.

Bishop Reig Pla has been the subject of attacks and even a legal complaint in the past for his declarations on gender and homosexuality.

The bishop, however, remains undeterred.

TVE, Spain's public TV channel, broadcast a Mass on August 3 celebrated by the bishop during which he observed that God created human beings in His own image and “created them as man and woman.” It is a teaching, he said, “that nowadays is obscured in Spain.”

Spain legalized gay “marriage” in 2005, a law that was validated by the country's highest court in 2012.

The gay rights group DiversAH blasted the bishop for the homily, saying his remarks are “homophobic.”

“To use freedom of speech to spread homophobic speeches as if they were neutral means to support the weakening of human rights,” the group said. “The declarations against homosexuality and transsexuality are a threat to the lives of many homosexuals, bisexuals and transsexuals. Any manifestations or speeches that spread homophobia contribute to hatred, aggression and even murder.”

In 2012, during Holy Week, the bishop had talked about homosexuality in a homily, just as he did three weeks ago.

At that time the gay lobby tried to silence him, calling for him to be prosecuted and filing a lawsuit. But last May a court decided in favor of the bishop.

“Since the Catechism of the Catholic Church is a book protected by Spanish laws (…) those who follow the teachings contained in this book must be allowed to announce them publically,” the court said, ruling that the bishop was simply teaching the Catholic faith, and that his words were therefore protected speech.

The bishop responded to that lawsuit at the time by publishing the testimonies of numerous men and women with same-sex attraction who had left the homosexual lifestyle on his diocesan website.

The growing number of cases of attempts to silence critics of the homosexual rights movement using the courts, as well as the police, has raised concerns about religious freedom and freedom of speech across the West.

However, a month ago, the European Court of Human Rights stated once again that there is no such thing as a “right to homosexual marriage.” According to the decision of the court, “the convention cannot impose to the member States the obligation to allow same-sex marriage.”