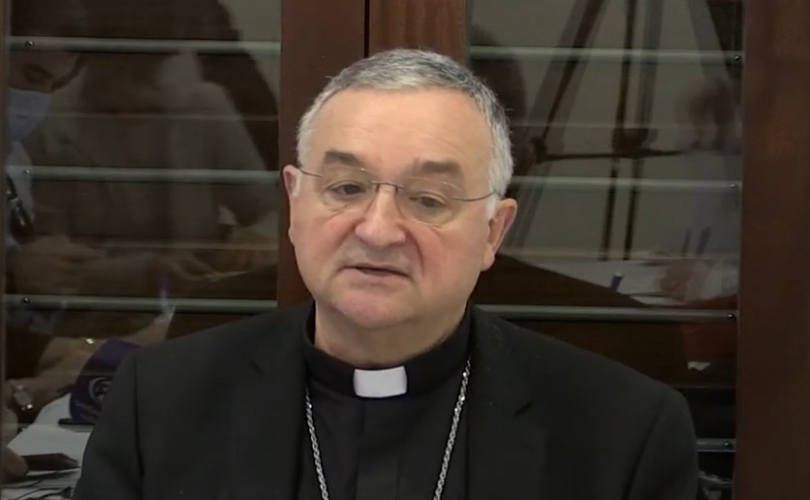 ALMERIA, Spain (LifeSiteNews) — Bishop Antonio Gómez Cantero of Almería, Spain has appointed a former communist leader as the head of Culture and University Pastoral Ministry for the diocese.

According to a report by ACI Prensa, the appointee, Enrique de Amo, was the leader of the “Izquierda Unida” communist coalition in Almería and a candidate for the left-wing populist Podemos party.

The conservative VOX party has already called for the removal of de Amo from his position because he insulted VOX and their voters with explicit vulgarity and foul language, calling them “human scum,” among other things.

In a press release, VOX cites a Facebook post from de Amo, in which Amo allegedly insulted VOX leaders and voters and used expletive language.

“The formation considers that the episcopal delegate of Culture and University Pastoral has disrespected the more than 80,000 voters of VOX in the province of Almeria, despising a political party that defends and represents Catholic values at all costs,” VOX stated in their press release. “Therefore, they request the immediate dismissal of Enrique de Amo from the diocese.”

Father Ignacio López Román, the vicar general of the diocese of Almería, defended de Amo’s appointment when asked about it by ACI Prensa. Román said that de Amo’s comments “were made at one time, in a political context, and now he’s in another context and in another time.”

The vicar general also claimed that the comments “don’t affect his new task and his new mission.”

“If he made those statements now, that would be something else. But if he did them in the political fray, it’s within his role as a politician, which he has already ended,” López stated.

De Amo, a professor of mathematics at the University of Almería, was the facilitator of the agreement with the university for the launch of the University Pastoral Ministry last April, according to ACI Prensa.

In an interview with La Voz de Almería, de Amo said that he has “always been blessed in the [political] party and [as a] communist in the Church.”

He indicated that he feels supported by the bishop of Almería, saying, “That I am on this team is the will of one person, Antonio Gómez Cantero, who thinks that things can also be done in another way, and not as they have been done so far.”

In another interview with El Español, de Amo said that he is aware of the heavy criticism that the diocese is receiving because of his appointment. “People who prejudge others have a spiritual life that is pitiful,” he lamented.

When asked how religion led him to left-wing militancy, de Amo said that “the Gospel is mixed with Marxism when it says about giving each one according to his ability, his need… You read the parable of the talents, listen to the message, and see the connections.”

When asked about “transgender rights” law de Amo replied: “Beyond the individual beliefs of one or the other, it is important that each person feels free, and that involves creating areas in which people can make their own decisions in the context of today’s modern families.”

De Amo seems to have been appointed as head of the Culture and University Pastoral Ministry without ever publicly renouncing his communist beliefs, even though Marxism and communism have been repeatedly condemned by the Catholic Church.

Blessed Pius IX, for example, outright condemned communism in his encyclical Qui Pluribus, saying the ideology is “contrary to the natural law.”

“To this goal also tends the unspeakable doctrine of Communism, as it is called, a doctrine most opposed to the very natural law,” wrote the pontiff. “For if this doctrine were accepted, the complete destruction of everyone’s laws, government, property, and even of human society itself would follow.”

Pope Pius XI also condemned the errors of communism in his 1937 encyclical Divini Redemptoris, writing, “[t]his Apostolic See, above all, has not refrained from raising its voice, for it knows that its proper and social mission is to defend truth, justice, and all those eternal values which Communism ignores or attacks.”

“The Communism of today, more emphatically than similar movements in the past, conceals in itself a false messianic idea,” Pius XI stated. “A pseudo-ideal of justice, of equality and fraternity in labor impregnates all its doctrine and activity with a deceptive mysticism, which communicates a zealous and contagious enthusiasm to the multitudes entrapped by delusive promises.”