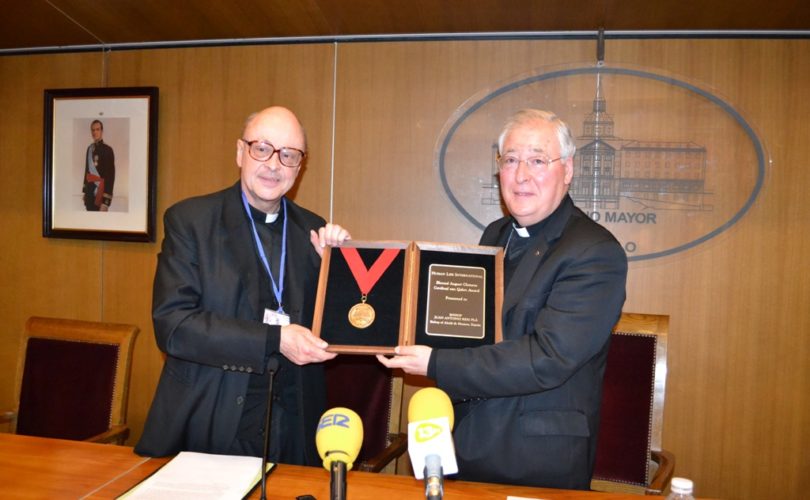 January 8, 2016 (LifeSiteNews) – As the Year of Mercy gets underway, a truly Catholic definition of mercy has been expounded by Spanish bishop Juan Antonio Reig Plà of the diocese of Alcalá de Henares.  In an interview with Gloria TV in October, the Spanish prelate explained what to many may seem a paradox – the love of the Church for sinners and the need to denounce sin. “It is not about a fight against anyone, we fight evil, we fight him who as prince of evil can fool so many people,” he said, “but with infinite love, with very great mercy for all people and in a particular for those who duped by the devil can follow paths of perdition.”

Bishop Plà explained that this was the way of Christ. “The Church has to fight evil, it must be continually proposing the way of Jesus Christ to the faithful, that means it has the mission to denounce prophetically many times, as Jesus did, those things that harm her children and can take them on the road to perdition.”  Concluding the point he said, “Therefore, yes to a prophetic denunciation and a condemnation of evil, and yes to an ever greater love like Jesus Christ for those who could have been deceived and might have been falling into sin or ways that do not lead to peace of the heart.”

The bishop, who faced legal proceedings in Spain for teaching that sexual acts between persons of the same sex are “intrinsically disordered,” said it is important to distinguish between criticizing people and criticizing sin.  “Jesus looked lovingly at all sinners and ate with them,” he said. “He looked at the sinful woman with special affection, but then, that gaze transformed the heart of the sinful woman, transformed the hearts of those who heard him and ate with Him, and He said, ‘go and sin no more.’”

The bishop also warned that the intimidation directed at him will be felt by Catholics all over the world. He spoke of a “global agenda in all five continents where more and more laws are proposed that go against the dignity — the sanctity of human life, the beauty that is in marriage between a man and woman, and the greatness and social good of the family.”

The situation of the Catholic Church in the midst of this global agenda, is an increasingly delicate one, but we have put all our hope in God, all our hope in Jesus Christ. Therefore (we) cannot fail to continue to promote the good, the beauty and the greatness of the dignity of human life, as well as that of marriage and the family. It is true that we are often in conflict with this New World Order or the agenda that is now being developed in many many countries and in particular where I come from, Spain. But we must be like the first apostles. They did not want the apostles to preach Jesus Christ, what’s more, they were imprisoned, they were beaten, but they came out happy to have suffered for Jesus Christ, and said that they could not keep quiet about what they had received.

Expressing his hopes for the Synod of Bishops prior to its commencement, Bishop Plà said now we need “the Synod Fathers and the Pope, the successor of Peter, (to) raise their voices in defense, first of children who sometimes are not allowed to be born by the scourge and crime of abortion, and defend with joy God's plan for women and men to join in holy matrimony and recover the sacred dimension of marriage.”

The bishop said “in this complex moment, in this serious cultural crisis, it would be a decadence of the spirit not to encourage Catholics to generously open themselves to life.” The Catholic family, he explained, “must be encouraged so it can fulfill its own mission, which is none other than to simply be joined in faithful love for life, so that conjugal love and devotion can generously be open to life, embracing Humane Vitae from the heart so that many families can come to fill this demographic winter that the West is now suffering.”

We currently live in a complicated and “very difficult time,” he concluded. “It seems that we live in a cultural desert and a desert of faith, but . . . I am convinced that if we look at Jesus Christ, the desert can become a garden.”