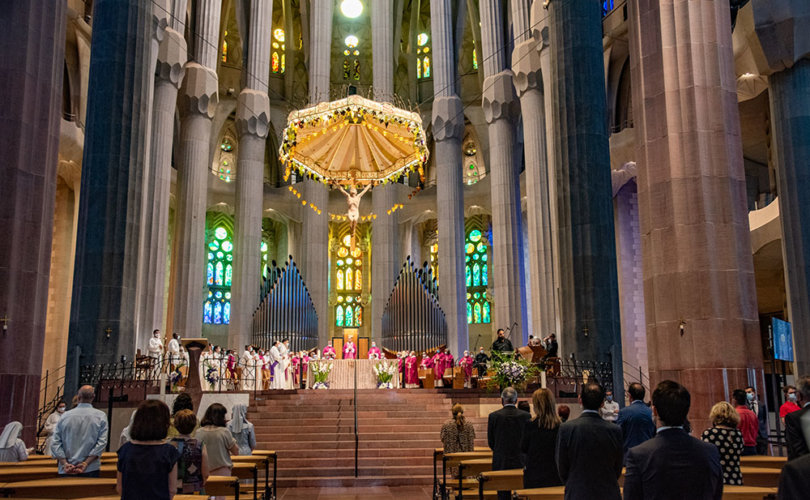 BARCELONA, Spain, July 27, 2020 (LifeSiteNews) – A spanish cardinal defied a government order limiting congregations at religious services to 10 people and announced plans to take legal action against what he describes as the “arbitrariness” of coronavirus restrictions on the “right to religious freedom and freedom of worship.”

This weekend, Cardinal Juan José Omella of Barcelona, Spain, celebrated a memorial Mass for those who have died during the lockdown, with images from the service published on the diocese’s website showing more than a hundred people in attendance.

Omella highlighted the inconsistency of government directives that encouraged tourists to visit the famous Basilica of the Holy Family, designed in the late 19th century by Antoni Gaudi, but which continued to limit attendance at religious events to 10 people.

The cardinal said in a statement issued yesterday that the situation “seems unfair and discriminatory considering that we have been very careful and respectful to maintain the health standards required for enclosed spaces, presented at all times to the administration, with the approval of doctors and, above all, taking note that for other smaller indoor premises a capacity of 50 percent is allowed.”

Made a cardinal by Pope Francis in 2017, Omella has previously criticized bishops and cardinals who have publicly asked Pope Francis to clarify whether his Exhortation Amoris Laetitia conforms to perennial Catholic teaching on marriage, the Eucharist, and conscience.

In light of the government’s refusal to adjust the restrictions on religious services, prior to the service Omella encouraged people to view the service via livestream, while pointing out that even if all those who had been invited were to attend then the basilica would still only have been at 23 percent capacity.

Historically, the Cataluña region is notoriously anti-clerical, with persecution of the Church and religious communities by Communists particularly fierce in the first half of 20th century.

Omella concluded his statement by announcing the diocese would be launching legal action against the restrictions.

“In the face of the unpredictable change of attitude of the Ministry of Health of the Generalitat de Catalunya, in the coming days we will initiate appropriate legal actions against arbitrariness and helplessness that suffer the right to religious freedom and freedom of worship, constitutionally protected,” he wrote.

In May, Cardinal Antonio Cañizares of Valencia came under police scrutiny for breaking Spain’s strict lockdown restrictions by giving a blessing and briefly exposing an image of the Blessed Virgin Mary at the front entrance of a basilica on the occasion of the city’s annual feast day.

In April, Spanish police shut down a Palm Sunday Mass on a church rooftop in Seville after receiving reports from locals that the regional coronavirus confinement laws were being broken.