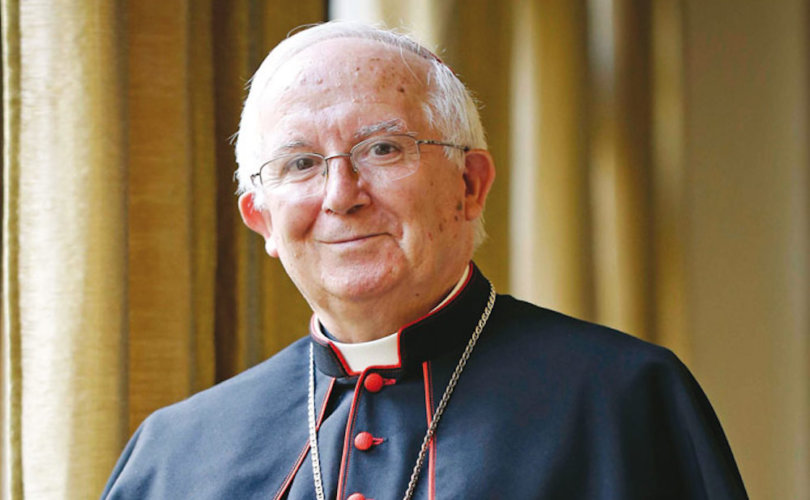 Cardinal Antonio Cañizares says the condemnations he’s faced over a controversial homily reminds him of past Christian persecution.

June 1, 2016 (LifeSiteNews) – A feminist organization in the Spanish province of Valencia are asking the government to prosecute a cardinal who denounced the influence of the “gay empire” and gender ideology.

Cardinal Antonio Cañizares, former prefect of the Vatican’s Congregation for Divine Worship and current archbishop of Valencia, recently told the faithful in a sermon, “The family is being stalked today, in our culture, by endlessly grave difficulties, while it suffers serious attacks, which are hidden from no one.”

“When the family is attacked or is diminished, the most sacred forms of human relationship are perverted,” he added.

On Friday members of the Feminist Platform of Alicante, a town in the same province, presented a formal request to government officials asking for the prosecution of Cañizares for “inciting discrimination and hatred” through his sermon. They were accompanied by representatives of leftist political parties, according to Spain’s El Mundo newspaper.

According to the group’s coordinator, Yolanda Díaz, feminists are “fed up with the impunity of the leaders of the Church” because they advocate “gender stereotypes that cause discrimination,” and expressed hope that prosecutors would not be satisfied with an “I’m sorry” from the cardinal.

“We ask the administration and the prosecutor’s office not to leave those comments unpunished,” said Díaz, who claimed that feminists were persecuted for fighting for “equality between men and women” and against the “heteronormative family.”

The governor of Valencia, Ximo Puig, denounced Cañizares’ statements, accusing him of “fomenting hatred,” and claiming that “the whole world understands that each person can love whom he wants.” He quoted Pope Francis’s question, “Who am I to judge?”, a remark made with regard to homosexuals two years ago and used often by those who oppose Catholic teaching on the immorality of homosexual acts.

Cardinal Cañizares has responded to his accusers with a press release in which he challenges jurists to show him what in his statements is “homophobic.”

“The censure and condemnation suffered by me in part of the media, by certain groups and certain politicians, remind one of periods of our history, but which are still recent, in which they censured and condemned certain homilies and certain preachers,” said Cañizares, invoking the persecution of Catholic clergy by socialists before and during the Spanish Civil War, in which thousands were killed for their faith. “Is it homophobic to defend the family?” he asked.