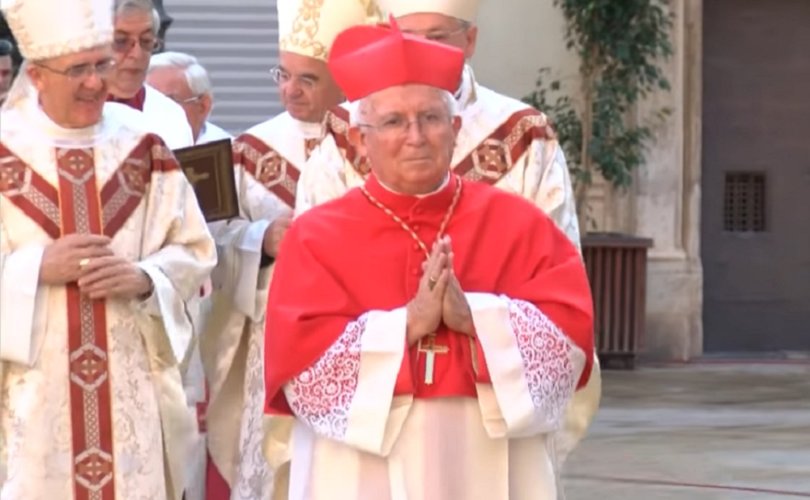 VALENCIA, Spain, January 14, 2020 (LifeSiteNews) – A cardinal and some of his fellow bishops have voiced misgivings about the secularizing government of Spain, warning that there is an “effort afoot to make Spain cease being Spain.”

Cardinal Antonio Cañizares Llovera of Valencia has made public a letter he wrote to the socialist president of the parliament of Spain. Also called the Prime Minister, Pedro Sánchez has been in power since 2018.

In the Epiphany letter, published on his archdiocese’s webpage on January 11, the cardinal expressed his worry about ongoing attempts to remove the Catholic faith from its place near the center of Spanish society. At stake are Catholic education, the lives of those vulnerable to euthanasia, and Church property the socialist government wishes to nationalize. The coalition government also wishes to promote sex education and “feminist policies.”

“I have followed the [secularism] debates, which have caused me bewilderment and uncertainty, concern, and a certain unease,” Cañizares wrote.

“Why? Because I have been able to verify that the situation we are experiencing is more critical and crucial than I thought and believed.”

The cardinal wrote that today “Spain is without a compass; it is a mess, bewildered and without a project.”

“A divided Spain that returns to the era of division and confrontation,” he continued.

“I have seen hatred, scowling faces and rejection, intransigence: a memory that makes us look to the future.”

Cañizares was referring to the Spanish Civil War (1936-1939) in which communists, anarchists, and Catholics waged battle, with atrocities occurring on all sides. More than 6,800 clergy and religious were murdered during the War, and as of June 2019, 1,915 have been beatified. The war ended with a victory by General Francisco Franco and the Church-friendly Nationalist faction. Franco remained in power as dictator until his death in 1975. There followed a relatively peaceful transition to a democracy under a constitutional monarchy.

Cardinal Antonio Cañizares believes that this peace is being threatened.

“The spirit of the democratic transition has been emptied out and forgotten,” he wrote.

“That spirit of harmony and coexistence that gave rise to the basic law of Spain in the Constitution has been broken, and although it appeals to the rule of law, which is based on this basic law, respect for the right therein it offers us and is derived from it as the framework and criteria of our social relations and of the peoples that make up Spain, have not been taken into account: it is omitted.“

After defending the monarchy as a “pillar that unites and sustains the rule of law” and “a guarantor and arbitrator of the harmony, understanding and reconciliation among the Spanish people”, Cañizares marveled at the return of Marxism to Spain.

“Marxist-communism, which seemed to have been banished after the fall of the Berlin Wall, is reborn and is certain to rule Spain,” the cardinal wrote.

“Social democracy is disfigured, the sense of democracy is replaced by the imposition of a group-think, and by authoritarianism and absolutism that are incompatible with democracy and the recognition of the freedoms based on freedom of conscience and religion that I have seen threatened in the [secularizing] controversy.”

Cañizares stated that euthanasia, which the secularists wish to impose in Spain, was discussed only “brutally and superficially.” He observed that there has not been, in the secularizing debates, much concern for the poor.

The cardinal also warned that Spain could become the next Venezuela―and cease being Spain.

“There have been moments when I thought that the populism and what was happening in some countries of the Americas, such as Venezuela, was being brought into the chambers of the Parliament of Spain,” he wrote.

“With great pain, I must warn you that there is an effort afoot to make Spain cease being Spain,” he continued.

“The principles and values that have made it what it is since the days of the Visigoths, which undertook great deeds, such as America, no longer exist and do not count while Spain’s unity is under assault.”

The cardinal assured the President/Prime Minister that he was praying for Spain.

According to the Catholic Herald, other Spanish bishops have spoken out about the secularization debate.

“Uncertainty is drawn on the horizon, but we know the sun will rise behind the clouds and storms,” tweeted Archbishop Jesus Sanz Montes of Oviedo

“The sun will bring back color after all the clumsiness, lies, and vanity which beset us.”

As the Herald also reported, the president of the Conference of Spanish Bishops, Cardinal Ricardo Blázquez Pérez, told Sánchez that the prelates would offer “loyal and generous collaboration” to help him “work in service of the common good.” Blázquez stated also that  “authentic religious life contributes to the general good of Spanish society.”