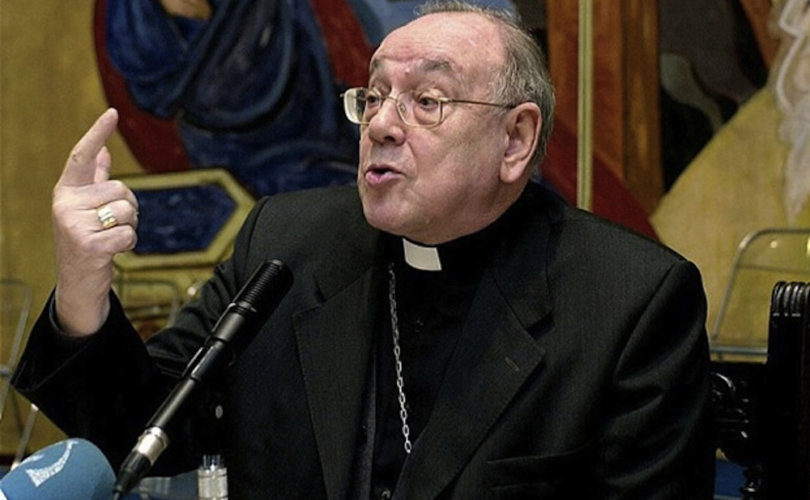 December 15, 2016 (LifeSiteNews) — The dubia of the four Cardinals are “conceited,” declared an op-ed by Cardinal Fernando Sebastian Aguilar in the semi-official newspaper of the Vatican, the L’Osservatore Romano on December 11.

“Some honorable men suffer because they do not understand what Francis wanted to say in Amoris Laetitia,” said Aguilar, former Archbishop of Pamplona, who elevated to a Cardinal in the consistory of February 2014 by Pope Francis.

Aguilar categorized the dubia as prideful because Pope Francis stands behind what has been written. “It is sufficient to want to understand it,” he continued, “in order to understand it.” Further, he invited the Cardinals to read “slowly” in order to clear up any remaining doubts. Aguilar added that those who say the Papal document or parts of it are personal opinion need more honesty and spiritual openness.

It is noteworthy that L’Osservatore Romano published the article at all. Usually, the publication of content of this nature is instructed from above. Aguilar’s contribution was titled “It is enough to want to understand” and published previously in the Spanish journal Vida Nueva.

“Pope Francis has a very realistic vision,” Aguilar continued, and explained that the Pope was merciful to those people who have been trapped in situations that are sinful but still are contrite of heart. To those people, Communion could be administered without creating grave scandal, he reasoned, if they truly repented. “If those who doubted would save some paper and would hear more confessions, then they would understand better.”

Numerous bishops have interpreted Amoris Laetitia in a contradictory fashion because of ambiguous passages while Pope Francis has given his opinion only in private statements or in hints during interviews. Rome is still “buzzing” with questions.