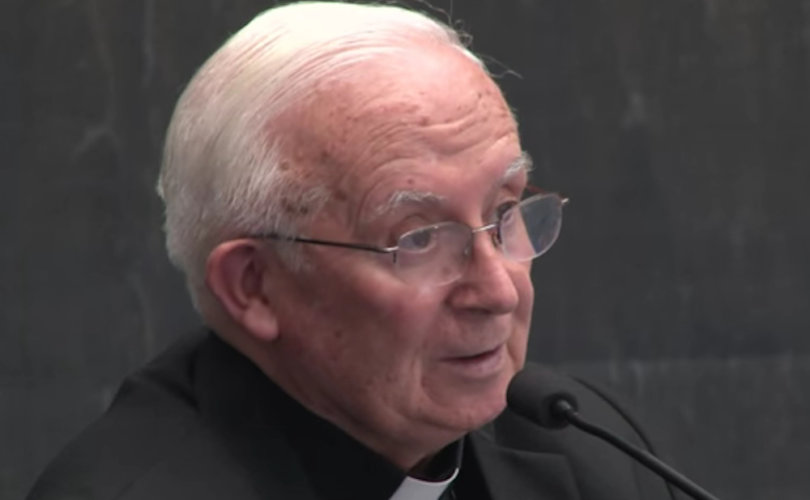 VALENCIA, Spain, August 17, 2017 (LifeSiteNews) – Never in history has the Church been as besieged as it is now, a cardinal archbishop said this week.

Speaking in his homily on the Solemnity of the Assumption of the Blessed Virgin Mary, Cardinal Antonio Cañizares Llovera of Valencia said the current time is a “very severe test for the Church.”

Many Christians are immersed in a time and society today often affected by a darkening of hope, Cardinal Cañizares said, in which “so many men and women seem disoriented, insecure, moodless, breathless, wrapped in a great loss of Christian heritage.” He went on to say they are also affected by a kind of practical agnosticism, religious indifference and a certain fear of the future, an imprisonment in the here and now.

Cardinal Cañizares encouraged Christians to “give reasons for our hope,” a report translated from the Spanish outlet Religion Digital said, citing the “certainty of the presence of Jesus Christ” in the Church as God’s commitment to not abandon mankind.

“The Church in her pilgrimage throughout the 20th and 21st centuries has suffered many tribulations,” he said, “and never in history has perhaps been harassed as in this period,” which he also called “a very severe test for the Church.”

Cardinal Cañizares added that despite the attacks and religious indifference among the faithful, the victory has already been won.

“Even if they engage in attacks and persecutions and even if we engage the Christians themselves with our infidelities and cowardice, they will not win because victory has already occurred and the sign and test is Mary, glorified and crowned,” he said.

Therefore in celebrating the Solemnity of the Assumption, the cardinal said, “a firm hope is aroused in the Church and in Christians, and she feels moved to give reasons for the hope which inspires her, even with martyrdom, the supreme and joyous incarnation of the Gospel of hope.”

The Catholic Church teaches that, “when the course of her earthly life was finished, (the Blessed Mother) was taken up body and soul into heavenly glory, and exalted by the Lord as Queen over all things, so that she might be the more fully conformed to her Son, the Lord of lords and conqueror of sin and death,” and further, “The Assumption of the Blessed Virgin is a singular participation in her Son's Resurrection and an anticipation of the resurrection of other Christians.”

Mary’s Assumption regards our future: it turns our gaze heavenward announcing the new heaven and new earth with Christ’s victory.

Cardinal Cañizares is the former Prefect of the Congregation for Divine Worship and the Discipline of the Sacraments, preceding Cardinal Robert Sarah. He was elevated to the cardinalate in 2006 by Pope Benedict XVI and appointed archbishop of Valencia in 2014 after Pope Francis removed him from the Congregation.

A local feminist group in Valencia sought to have the cardinal prosecuted last year for comments he made on the “gay empire,” radical feminism, and gender ideology when detailing attacks on the family in a homily.

Cardinal Cañizares challenged critics in a press release to identify what was homophobic in his homily and likened the censure to persecution of Catholic clergy by socialists before and during the Spanish Civil War.

He asked in the press release, “Is it homophobic to defend the family?”

The provincial government opened an investigation, but a Spanish court promptly dismissed the charges.