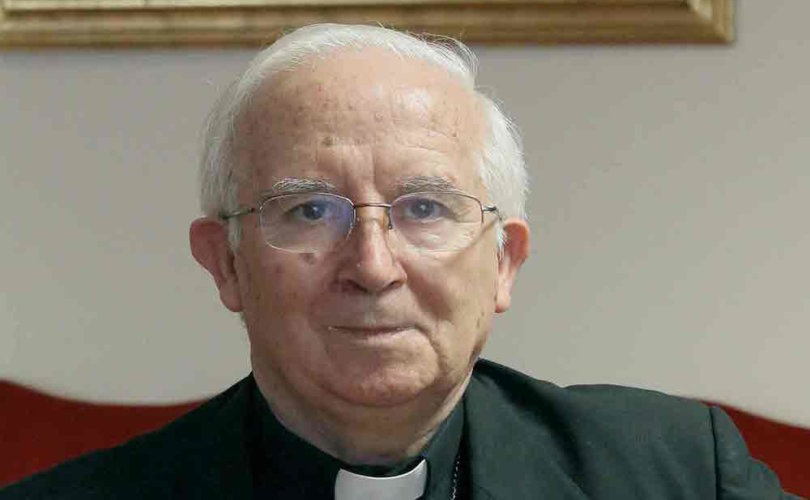 June 24, 2016 (LifeSiteNews) – A Spanish court has dismissed charges against Spanish Cardinal Antonio Cañizares alleging he incited “hatred” and “discrimination” for denouncing the aggressions of the “gay empire” against family values, according to the Spanish media.

According to the Superior Tribunal of Justice of the province of Valencia, the cardinal’s statements fall under “freedom of political ideology and of expression…ideas, as such must not be persecuted with criminal penalties.”

The court added that the charges would be dropped to “avoid submitting a person to a penal process based on reckless accusations or complaints and/or based on facts that manifestly do not constitute a penal infraction.”

Cañizares, who is the archbishop of Valencia, came under angry criticism from socialist parties and politicians in the province of Valencia last month for his strong words against the homosexual agenda in Spain, which included the phrases “gay empire” and “gender ideology.” His comments were denounced as offensive by socialist political parties and homosexual organizations in Valencia.

The cardinal’s remarks about an aggressive “gay empire” seemed literally to be fulfilled as he became the target of various criminal complaints filed by leftist parties and groups. They were joined by the governor of the province, Ximo Puig, who accused Cañizares of “inciting hatred” against homosexuals.  Then, on June 3, a homosexualist group called “Lamda” also filed a criminal complaint.

“The declarations of the archbishop are words filled with hatred, are homophobic and sexist, and only incite hatred against those of us who don’t enter into the archaic models [of the family] that the Catholic hierarchy defends,” Lamda wrote in its complaint.

Finally, on June 14, Valencian prosecutors decided to open an investigation of the cardinal, under article 510 of the Penal Code which penalizes those who “publicly foment, promote, or incite, directly or indirectly, hatred, hostility, discrimination, or violence against a group.” However, after learning that the case was already being examined by the Valencian judiciary, prosecutors closed their investigation and left the case to the judges, who then dismissed the charges.

The result is similar to other cases in which Spanish bishops have been denounced to authorities for opposing the gay agenda.

Bishop Juan Antonio Reig Pla of the diocese of Alcalá de Henares has been repeatedly charged with violating laws against “inciting hatred” for condemning homosexual behavior. However, he has always been vindicated by the Spanish courts.