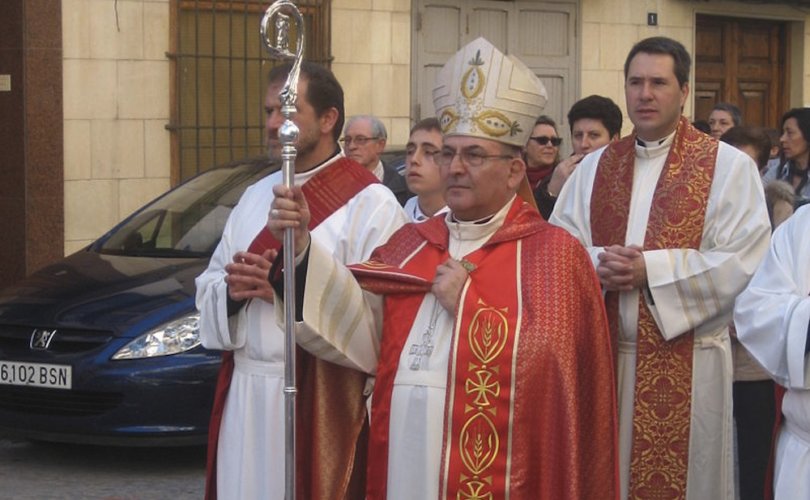 August 30, 2016 (LifeSiteNews) — A Spanish priest who carried out a marriage-like “blessing” of a homosexual couple after the registration of their civil “marriage” last week has been reprimanded by his diocese and apologized, according to chancery officials.

The diocese of Segorbe-Castellón in the Spanish province of Valencia issued a statement noting that the actions of Fr. José García, who conducted the ceremony on July 30, “gravely contradict” the teachings of the Catholic Church on the immorality of homosexual behavior.

“Regarding the equalization of homosexual unions with marriage or of actions that could be understood in that way, we affirm, in communion with Pope Francis, that ‘there are absolutely no grounds for considering homosexual unions to be in any way similar or even remotely analogous to God’s plan for marriage and family’ (Francis, Postsynodal Apostolic Exortation Amoris Laetitia, n. 251),” the diocese states.

The diocese reports that Bishop Casmiro López Llorente and the vicar general confronted García about his behavior after the publication of articles about it on the Internet. García “has recognized before the bishop the grave error of his behavior, which was motivated by an erroneous application of mercy,” the diocesan communique states.

Fr. García “did not distinguish the welcoming and pastoral accompaniment of persons, on the one hand, from the apparent approval of a union that the Church cannot approve,” the diocese states, adding that García “asks the forgiveness of the Church and of all those for whom his behavior might have been a motive of scandal, and promises that he will never again carry out the same or similar action.”

The diocese is considering punitive measures against the priest, investigating whether or not “there exists in this case the necessary elements for the disciplinary measures established in the Code of Canon law.”

When the story broke in the Spanish media, García claimed the event was held for the lesbian couple merely to “bless their love and struggle,” despite the fact that the “blessing” was given while they were wearing white dresses that appeared to be wedding garments, and occurred only about a day after the two had entered into a civil “marriage” under Spanish law. Moreover, the couple issued invitations that announced the event as a “wedding,” (“casament” in the Valencian dialect).

The Catholic Church teaches that homosexual sexual acts are “intrinsically disordered” and are “acts of grave depravity,” and that homosexual unions, including civil unions and civil “marriages,” can “in no circumstances be approved.”

“In those situations where homosexual unions have been legally recognized or have been given the legal status and rights belonging to marriage, clear and emphatic opposition is a duty,” states the Vatican’s 2003 declaration on homosexual unions. “One must refrain from any kind of formal cooperation in the enactment or application of such gravely unjust laws and, as far as possible, from material cooperation on the level of their application.”