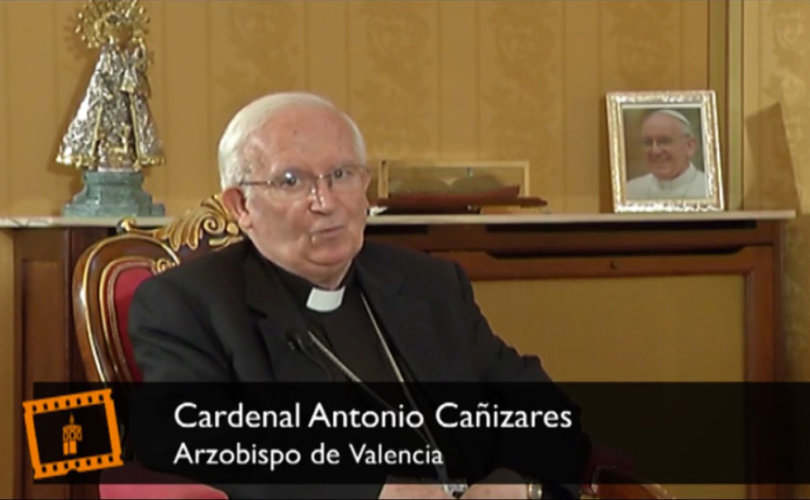 June 16, 2016 (LifeSiteNews.com) – The government of the Spanish province of Valencia has opened an investigation against the Cardinal Archbishop of Valencia, Antonio Cañizares Llovera, following numerous complaints over a sermon in which he denounced the influence of the “gay empire” on society.

If prosecuted and convicted, Cañizares could receive up to four years in prison for “inciting hatred” against homosexuals under Spanish law.

“The family is being stalked today, in our culture, by endlessly grave difficulties, while it suffers serious attacks, which are hidden from no one,” Cañizares told the faithful last month.

In another sermon the cardinal called gender ideology “the most insidious and destructive towards humanity in all of history,” and warned that “world powers are seeking to impose it more or less stealthily with evil laws, which one should not obey.”

As LifeSiteNews.com reported on June 1, the cardinal’s words about an aggressive “gay empire” seemed literally to be fulfilled as numerous homosexual and socialist organizations began to file criminal complaints against him. They were joined by numerous leftist politicians who dominate the government of Valencia, including the governor of the province, Ximo Puig, who accused him of “inciting hatred” against homosexuals.  Then, on June 3, a homosexualist group called “Lamda” also filed a complaint.

Cañizares was also the subject of criminal complaints in October of last year for his comments on the dangers of Islamic immigration into Europe, calling it an “invasion” and a “Trojan horse” that posed a danger to Spanish society.

Finally on Tuesday, the socialist-dominated Valencian government decided to open an investigation of the cardinal, under article 510 of the Penal Code which penalizes those who “publicly foment, promote, or incite, directly or indirectly, hatred, hostility, discrimination, or violence against a group.”

The government’s decision to investigate Cañizares came just a day after the bishop protested publicly against a blasphemous portrayal of the Virgin Mary by the homosexual group Endavant. He also called for acts of reparation for the insult by praying the rosary, which was supported by the Spanish bishop’s conference. It is not clear if there is any connection between the two events.

The attacks on Cañizares have been rejected by the head of Spain’s conservative party, the People’s Party (Partido Popular) in Valencia, Isabel Bonig, who has said that “These declarations in no way incite hatred.” In addition, the Spanish activist group HazteOir has gathered tens of thousands of signatures on a petition supporting the cardinal.