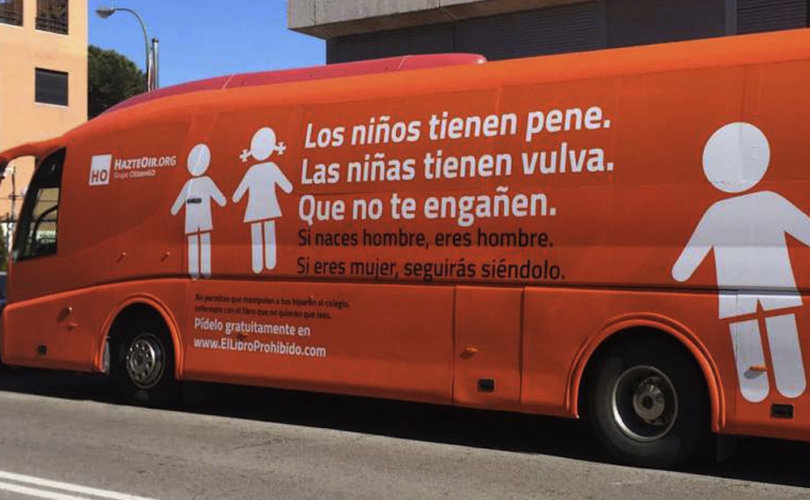 MADRID, Spain, February 22, 2019 (LifeSiteNews) — HazTeOir.org — a Spanish pro-family organization that has combated transgender ideology — is going to court over the government’s decision to rescind its nonprofit status.

In a press conference on Tuesday, Ignacio Arsuaga of HazTeOir.org said, “The Socialist government and radical associates have decided to hunt down and seize an association merely because it differs with their gender ideology. But they can’t shut us up.” It was Spain’s Minister of Interior Fernando Grande-Marlaska who personally signed the order rather than a more customary lower functionary.

The Spanish Ministry of Treasury sent a letter to HazTeOir.org on Tuesday informing the association that the nonprofit status has been revoked. The revocation was due to the association’s campaign of 2017, when Arsuaga drove a bright orange bus throughout Spain proclaiming: “Boys have penises, girls have vulvas. Don’t let them deceive you.” The campaign caused controversy throughout Spain and much criticism from government authorities and “transgender” advocates. Municipal authorities in Madrid, for example, forced the bus to park and desist from its rounds temporarily because of its messaging.

According to the letter, the government adjudged that HazTeOir had “declared itself contrary to the promotion of the common good, which in this case demanded respect for others’ vital values or opinions.” It went on to say HazTeOir’s promotion of its ideas showed “disrespect for the dignity of people or groups in our society that have different concept about sexual orientation.”

This year, HazTeOir plans to kick off a campaign against radical feminism and transgenderism featuring the same colorful bus on a nationwide tour. The kickoff for petitions and its ad campaign will fall on March 8 when Spain’s radical feminists plans widespread protests. Arsuaga said he is calling on the People’s Part, Ciudadanos, and Vox to join HazTeOir to rescind LGBTQ laws. The laws, Arsuaga said, that refer to so-called gender violence “violate the principle of equality and the presumption of innocence.”

Referring to the 2017 campaign against “transgender” ideology being pushed in schools, Arsuaga recalled that members of HazTeOir were assaulted by opponents. The HazTeOir bus was vandalized and HazTeOir was soon compelled to change its message to “No to bullying.” At the time, Arsuaga proclaimed that if the government’s “totalitarian” project is not halted, resisting religious leaders wind up in prison. On Tuesday, Arsuaga said the “full-fledged ideological” assaults were “promoted by those in power.”

“That (Grande-Marlaska) signed the order is yet more evidence that this is a political and ideological persecution,” Arsuaga said. While he said HazTeOir does not receive government subsidies, Arsuaga said losing its nonprofit status means that donors will not be able to deduct donations from their income taxes.

Arsuaga asked how the government can place sanctions on HazTeOir “by arguing that its way of thinking has bothered some people. This kind of argument is common among dictatorships, not democracies,” he said.