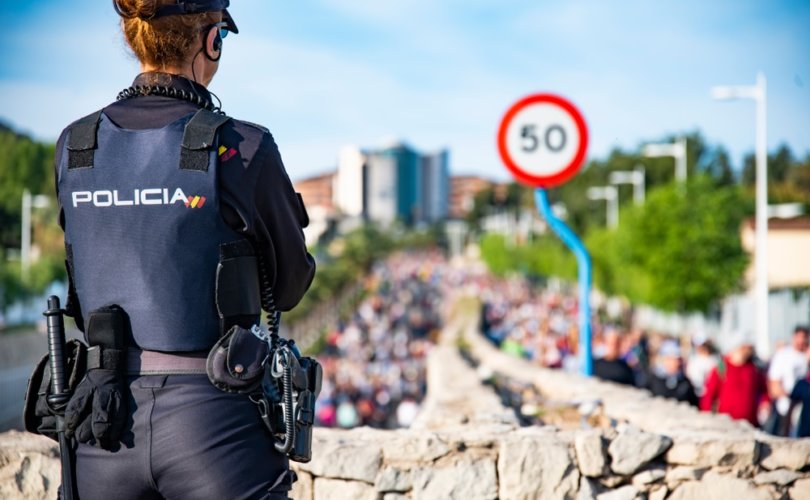 April 8, 2020 (LifeSiteNews) — Police in Spain shut down a Palm Sunday Mass on a church rooftop after receiving reports from locals that the regional coronavirus confinement laws were being broken.

The incident happened in the southern Spanish city of Seville. Local media reported that the parish priest from “the Paulists’ church” was celebrating Mass on the roof of his church, complete with an improvised altar and lectern.

Before the priest was able to finish Mass, local police from Seville along with Spanish National Police showed up and ordered the Mass to be immediately shut down. The regional authorities said the rooftop mass violated the local state of emergency during the coronavirus lockdown.

“We are sorry, but the police have just arrived and we have to interrupt the Eucharist,” the priest was quoted as saying in the local media report.

The same report says loud “boos” were then shouted at police, with some neighbors heard shouting, “We want Mass” and demanding that the authorities respect the holiness of the Mass. The priest was then forced to leave before the Mass could be concluded.

According to the local report, the regional municipality said police were called to shut down the Mass due to complaints from neighbors, who claimed that there were between 10 and 15 people gathered on the roof.

According to the parish priest, however, no more than eight people attended.

Churches in Spain were shut after the country began a nationwide lockdown in mid-March. Spain has been hit hard by the coronavirus, recently surpassing Italy in total cases. Spain’s death toll as of today is reportedly over 14,000.

The report says each of the individuals who attended the disrupted Mass received a reprimand from the police for participating. The report also says the municipality argued that the Mass went against the wishes of the archbishop of Seville, Juan José Asenjo Pelegrina.

According to the Seville diocese, Masses are allowed only inside of the church and without any parishioners. Like in many dioceses around the world, Masses can be watched remotely as they are celebrated. Watching a Mass on a screen does not fulfill a Catholic’s holy obligation to assist, but most bishops have dispensed their people from that obligation during the coronavirus panic.

In January of this year, Archbishop Pelegrina made news after a requiem Mass for abortion victims was suddenly canceled. The Mass was planned by the Spanish pro-life political party Vox, who said of its cancelation that “Despite the tepidity on the part of many, we remain firm in defending life.”

Recently, priests in Naples, Italy celebrated Mass on the roof of their church with many locals joining in prayer from their balconies. Also in Italy, a priest from a small town was recently fined and sent into quarantine for carrying a crucifix throughout the streets.