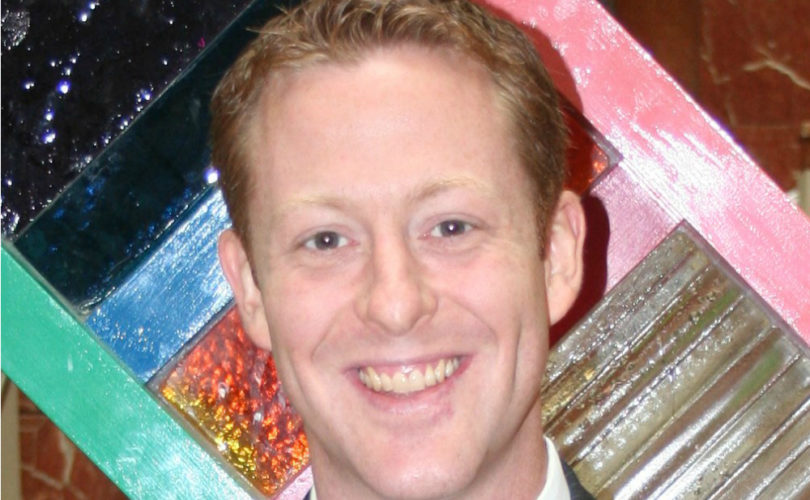 LOS ANGELES, March 17, 2015 (LifeSiteNews.com) — A speaker at the Archdiocese of Los Angeles annual conference for religious educators on the weekend denounced the Church’s teaching on homosexuality, saying the Catechism’s language on the issue is “abusive” and “gravely evil.”

Speaking at the conference of 800 catechists from the U.S. and Canada, Arthur Fitzmaurice, the resource director for the Oakland-based Catholic Association for Lesbian and Gay Ministry and former co-chair of the Archdiocese of Los Angeles' Catholic Ministry with Lesbian and Gay Persons, criticized what he called the Church’s “poor and dangerous theology” on homosexuality and its practice of firing homosexual employees when they came “out.”

LifeSiteNews made several attempts to the contact the Archdiocese of Los Angeles, but did not hear back by press time.

Fitzmaurice spoke at the event, which is often criticized for its dissident speakers and liturgical abuses, despite the fact that the Catholic Association for Lesbian and Gay Ministry has crossed swords with its own bishop in Oakland. Shortly before his appointment as archbishop of San Francisco, then-Oakland Bishop Salvatore Cordileone issued an ultimatum to the group, saying that after a year of talks he would declare it “not authentically Catholic” if it refused to endorse traditional Church teaching on sexuality.

At the Los Angeles conference, Fitzmaurice told the assembly that the references to homosexuality in the Catholic Catechism are hurtful to homosexuals, especially young people, and drive them from the Church. “The paragraph on homosexuality, which describes it as ‘intrinsically disordered’ while also demanding respect for gays and lesbians, is placed in a section of the catechism paragraphs condemning ‘pornography, prostitution, and rape,’” he said. “To keep this abusive language in the Catechism and other Church writings is, in itself, gravely evil.”

Fitzmaurice also condemned the dismissal of homosexuals from Church and parochial school jobs and the denial of sacraments to homosexuals. These “reinforce the false message that being born LGBTQ is shameful” and “communicates the sentiment that we are beyond God’s abilities and unreachable by God’s love and grace.”

The spectacle of a conference of Catholic religion teachers being subjected to a condemnation of Church moral teaching was directly linked by one former catechist to the “sloppy talk” and “confusion” emanating from the Vatican on morality.

Barbara Nicolosi, an author, teacher, Hollywood screenwriter, and blogger at church of the masses, said the invitation to Fitzmaurice to address catechists “speaks to the confusion within the Church” because of the Vatican’s increasingly informal communications practices and its transmission of messages that undermine doctrine. “Ever since the Pope said ‘Who am I to judge?’ (when asked about homosexual priests) everyone has been wondering what is that supposed to mean for us in the Church now, with many people trying to get out ahead of it.”

The Church’s traditional teaching that homosexuality is “gravely disordered” is consistent with Her overall teaching on human nature and sexuality, Nicolosi said: to break with that would be incoherent. Unfortunately, Pope Francis’ practice of making casual statements on important doctrinal matters “is hard for orthodox Catholics who’ve been trained to take what the Pope says very seriously. Orthodox Catholics, especially those trained in theology, don’t downshift that fast.”

Nicolosi said the current Vatican practice of “just throwing comments out and then kind of backtracking” has happened too often to be accidental. “It has to be willed,” she said. “I have no idea what the purpose of this would be as Magisterial strategy, but I suspect it is just all part of the liberal nonsense that downlplays intellectualism as elitist and thinks any kind of dialogue is in itself redeeming. For the record, dialogue isn't redemptive.  Truth is redemptive.”

“We have one thing going for us,” Nicolosi added. “Homosexuality really is by its nature gravely disordered. It has terrible effects in the lives of those who embrace it and no rhetorical strategy is going to overwhelm the obvious tragedy of it.”

Amen to that, said recovered homosexual Joseph Sciambra at his website. Noting that Fitzmaurice has previously “vehemently stood by the CALGM’s position that “being gay is a gift and a grace,” he observed that, “On a personal note, I found nothing in the gay lifestyle that would even remotely confirm that my homosexuality was a ‘gift’ or a ‘grace.’ If it was anything, it was an unbelievable burden – a wound that wouldn’t heal; and why would it not heal? Because the trauma of my childhood got attached to the modern notion of the homosexual orientation; what ‘being gay’ caused was an absolute stagnation in my ability to heal and an incapacity to receive God’s healing Grace.”

Sciambra added, “The language in the Catechism was far from ‘abusive.’ It was liberating,” and ultimately offered him freedom. Fitzmaurice, on the other hand, wanted “to create a new Church: one where there is no possible escape from the hell of homosexuality.”