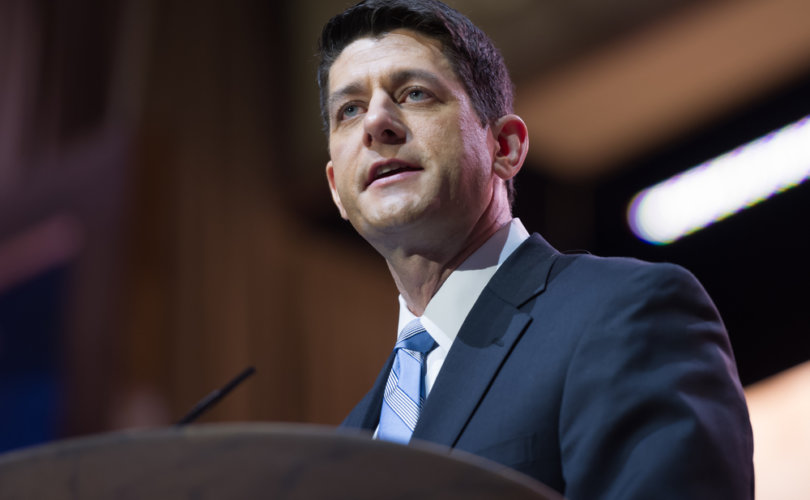 WASHINGTON, D.C., January 27, 2017 (LifeSiteNews) — House Speaker Paul Ryan vowed to the hundreds of thousands of pro-lifers at Friday’s March for Life that the Republican-controlled government will be doing its utmost to continue defending unborn human life and ensuring they’re protected under the law.

In a short statement addressed to participants, Ryan expressed the unified support of the House, Senate, and White House, for the March and the pro-life cause as a whole.

“For the first time in a while, I am happy to say that the House, the Senate, and now the White House are united around that same purpose [defending life].”

He mentioned the massive pro-life victory earlier in the week which was the House passing H.R. 7, the No Taxpayer Funding for Abortion Act, to ban taxpayer funded abortion in the country – no doubt, a major blow to the Planned Parenthood abortion business.

“This is truly a new dawn for the unborn and for those women and men who defend them,” said Ryan.

“Today, you march to defend the rights of those who cannot defend themselves. You march to give a voice to the silenced. Thank you for your passion and courage. Know that we march with you and that we will not stop fighting until every life is protected under the law.”

Vice President Mike Pence, one of the keynote speakers and the first VP in history to address the March, shared in the pro-life sentiments when he proclaimed to the marchers that “life is winning again in America” and encouraged pro-lifers to “press on” to defend life.

Prior to the event starting, President Trump tweeted out his support: “The #MarchForLife is so important. To all of you marching — you have my full support!”

Trump also expressed his support for Pence’s keynote speech that morning in a second tweet. “Mike Pence will be speaking at today's #MarchForLife — You have our full support!” he wrote.

Kellyanne Conway, Counselor to President Trump, also spoke at the event declaring her firm support for the pro-life movement and calling the Trump administration a ‘new dawn for life’ in America.