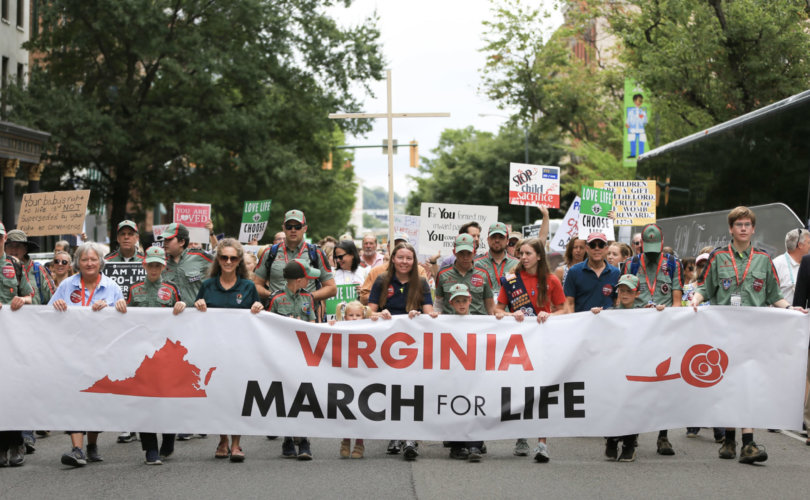 (LifeSiteNews) — More than a thousand Virginians rallied last month in Richmond, calling for the protection of the unborn and casting their votes for pro-life candidates on the first day for early voting in this year’s state elections.

The third Annual Virginia March for Life drew between 1,000 and 1,500 participants to a noon rally at the Capitol followed by a march around Capitol Square. Speakers included Republican House of Delegates members Emily Brewer (64th District) and John McGuire (56th District); Republican Sen. Bryce Reeves; Victoria Cobb, president of the Family Foundation of VIrginia; Jeanne Mancini, president of the March for Life Education and Defense Fund; and Leslie Blackwell, who shared a post-abortive testimony.

The event was co-hosted by The Family Foundation of Virginia and the national March for Life.

“We have come together to highlight the cause of life in Virginia where there are far too few protections for the unborn,” Mancini said in a Family Foundation press release after the event. “This march gave pro-life Virginians the opportunity to be heard and demand respect for the rights of these children. Every human life should be valued and deserves legal protection.”

Degradation of protections in the Commonwealth

Under the leadership of Democratic governors over multiple terms, the Commonwealth has seen an increase in abortion accessibility. Women in the state can now legally abort up until the third trimester. Beginning Oct. 1, abortion became available via telemedicine through the distribution of chemical, life-ending drugs. Only a handful of states across the nation allow this practice.

In Virginia, the parental consent law and partial birth abortion ban, mainstays in protecting life in the Commonwealth, are at risk. Virginia’s Republican Congressmen voted against the bill while all Democrats voted in favor.

“Today, at our third March, we gather to declare that just because Governor Ralph Northam received $3 million in campaign funds from the abortion industry for his election, we the taxpayers should not have to refill their coffers with nearly $6 million of our taxpayer dollars flowing to their facilities,” Cobb said.

On the federal side, support for abortion continues to expand in legislation. Last month, the U.S. House of Representatives passed the Women’s Health Protection Act (H.R. 3755). Winning by a margin of seven votes, this act seeks to nullify state protections for the unborn and halt the passage of pro-life legislation at the national level. It also makes government funding for abortion almost limitless.

Pro-life leaders consider state-based movements crucial in impacting broader, national change. The recent win against the abortion industry in Texas demonstrates what is possible at the state level.

“Fundamentally, all the legal parameters around abortion are set at the state level,” Cobb said. “Advocates for the unborn must engage there as the first point of being a voice for the vulnerable. Virginia is far from where Texas is politically, but we know there are many improvements that may be made around giving women every opportunity to give life to her child here in our Commonwealth. Marchers were encouraged by the Mississippi case at the Supreme Court, seeing a path to restoring a state’s legal right to shut down the abortion industry.”

The diverse faces of pro-life

Youth populations hold a critical role in driving change, with Students for Life and other young people playing a key role in the march, Cobb said.

“After the adults went home, the students stayed and put in 5,000 calls to pro-life homes and spent the weekend knocking on nearly 5,000 doors mobilizing the voter for pro-life candidates in our elections,” she said.

A Richmond native, Ann Rhys, 66, marched at the capitol, representing a generation that came of age during the legalization of abortion.

“I attended because of my concerns about life Issues,” Rhys said. “A friend said to me years ago that days were coming in which she could be euthanized instead of dying a natural death. She was absolutely correct. The birth control pill caused the door to open a tad bit. Abortion kicked the door down. Euthanasia is the ‘mop up’ operation.”

Rhys also saw the March as an opportunity to stand up for her community, the black community.

“I stand against abortion because of the mental, emotional, physical, spiritual havoc it causes,” she said. “I do not doubt that, if you dig deep enough within black communities, you shall find the devastation of abortion in many lives. I want Roe v. Wade to be overturned before I pass away. I want a heartbeats law passed here in Virginia.”

The Virginia Society for Human Life plans to gather pro-life supporters at the capitol in February during the first 2022 General Assembly.

“VSHL and the Bishops Conference of Virginia are working together to hold a massive lobbying day on Feb. 9th, 2022 to bring pro-lifers into the offices of Virginia legislators at a time of year when they really need to see and hear from us as they pass laws,” said Olivia Gans-Turner, VSHL president. “This is a priority for both dioceses and our organization and has never been done this way before.”