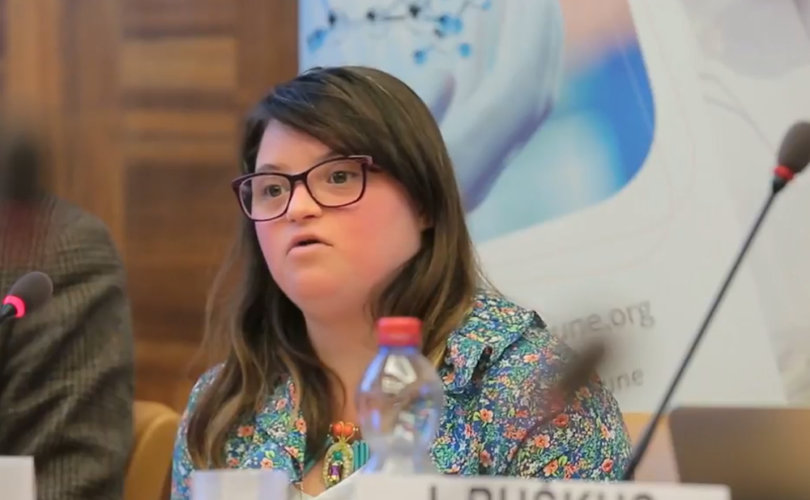 GENEVA, Switzerland, March 27, 2018 (LifeSiteNews) – Last week, two prominent human rights speakers with Down syndrome called on the United Nations to take action against the mass extermination of people like them.

The Jerome Lejeune Foundation, an international organization dedicated to Down syndrome research, care, and advocacy, co-organized the March 15 event with Poland, the Philippines, Argentina, Panama, Lithuania, and the Sovereign Military Order of Malta to take place at the 37th session of the UN’s Human Rights Council, as well as coincide with World Down Syndrome Day on March 21.

It featured the testimony of John Franklin Stephens and Charlotte Fien, who both used the opportunity to detail the full lives of people with Down syndrome endangered by the rise of eugenics in several countries around the world.

Stephens began by easing tensions with a joke about his extra chromosomes giving him a “little bit uncommon” appearance — “in my case, uncommonly handsome.” From there, he stated simply that he was an individual who should be seen “as a human being, not a birth defect.” People like him, he said, need not be “eradicated” or “cured” but rather loved, valued, educated, and sometimes helped.”

He explained that such help should take the form of early training for parents of Down syndrome babies, medical care such as eye exams and glasses, job training to help become self-sufficient, and ultimately to hold them to the same standards as everyone else.

“I was included in ordinary classes; the common kids and I learned from each other,” Stephens pointed out. Most importantly, he said “expect competence, not failure.”

He noted that his active life includes two White House visits, U.S. Senate testimony that went viral last fall, a role in the 2014 film Touched by Grace, and writings published worldwide. All of this, he says, is proof positive that “a life with Down syndrome can be as full and exciting as any other.”

Stephens also pointed out that people with Down syndrome provide tangible benefits to the world around them. From their extra chromosomes making them a “blueprint for medical research” on diseases such as Alzheimer's to research affirming that people with Down syndrome and their families are overwhelmingly happy, Stephens declares people like him a “medical gift to society” and an “unusually powerful source of happiness.”

His remarks took on a serious edge when he warned that the world’s Down populations are also the “canary in the eugenics coal mine,” an opportunity to reflect on how far societies are willing to go to exterminate so-called undesirable populations.

“How would the world react if a nation proclaimed that it would use genomic testing to make itself ‘Unpopular ethnic minority free’ by 2030?” Stephens asked, referencing Iceland and Denmark’s expectations to be “Down syndrome-free” within 10 years. “The U.N. has a name for this, but we need not go there.”

“I truly believe a world without people like me will be a poorer world, a colder world, a less happy world,” Stephens said.

Fien’s remarks touched on several of the same points. She stressed the importance of Down syndrome children going to the same schools as other kids, called for job training assistance, and highlighted children like “Umer in Pakistan who loves gymnastics and wants to be in the Olympics,” as an example of how Down kids “prov(e) the world wrong every day.”

However, she focused more on the threat of abortion to the community. “A mother’s womb is the most dangerous place for babies with Down syndrome,” she said. “As long as people with Down syndrome are kept out of mainstream society, we will be feared, not accepted, and aborted into extinction.”

“The UN is against abortions that target female babies because it’s harmful towards women,” Fien pointed out. “So why are they OK with wiping out my future community?”

Fien called on countries to pass laws such as Ohio’s ban on abortions targeting babies with Down syndrome, as well as for the UN to “create sanctions against countries practicing eugenics.” She wants the UN to start with Denmark, Iceland, the Netherlands, and the United Kingdom,

She also singled out UN delegate Ben Achour, a delegate who has advocated for doing “everything we can to avoid” “handicaps” such as Down syndrome, including aborting babies diagnosed with the condition “as a preventative measure.”

“How is that not eugenics?” she asked. How is that acceptable to target a group of human beings for extinction? Is that not what genocide is? To get rid of an entire group of people?”

“You can try to kill off everyone with Down syndrome by using abortion, but you won’t be any closer to a perfect society,” Fien declared. “You will just be closer to a cruel heartless one.”

However, Stephens’ and Fien’s pleas seem to be going unheeded at the international body. Last week, LifeSiteNews reported that a UN working group on women’s discrimination called on Poland to reject legislation protecting preborn babies with Down syndrome.