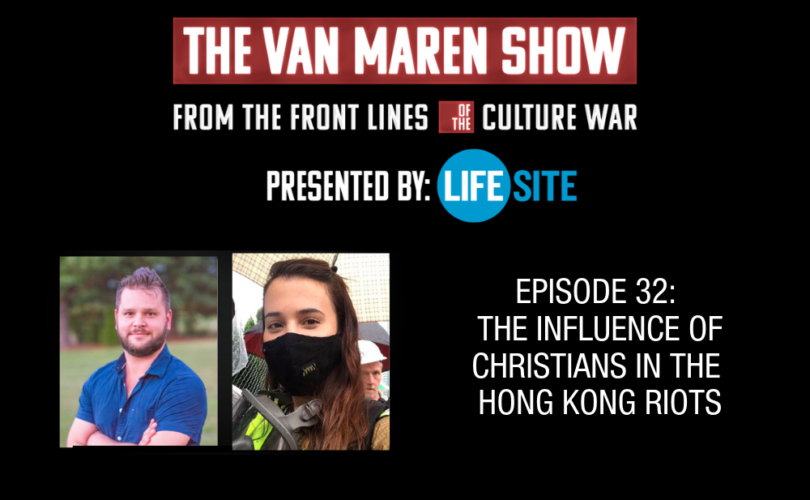 September 4, 2019 (LifeSiteNews) – In today’s special episode of The Van Maren Show, Jonathon Van Maren speaks with Alessandra Bocchi, a journalist who just returned from Hong Kong, about the historic protests happening there.

The Hong Kong protests started months ago as a peaceful demonstration against an extradition bill passed by the Hong Kong government. The people of Hong Kong are concerned the authoritarian government will use this extradition policy to bring individuals accused of political crimes back to mainland China.

Amazingly, according to Bocchi, the protests aren’t organized by a single person, but were more of a spontaneous combustion. Extraordinarily, everyone has been, and continues to be, on the same page as the protests and demands develop.

What most people don’t realize is many of the protesters in Hong Kong are Christians.

“I was very surprised because I've seen various protests in the Western world and I've never witnessed people singing Christian hymns. In Hong Kong where Christians are a minority, where you don't even expect to hear any hymns anywhere you have them chanting, thousands of them chanting, together and holding hands,” Bocchi tells Van Maren. “You see this collaboration with Christians and they're very active in their protest.”

Bocchi recounts her conversations with the Christian protestors as they expressed their concerns that they would be persecuted just like Christians are persecuted in mainland China – Bibles are burned, churches are burnt down. They feared the extradition bill would be used to arrest Christian leaders and establish a belief system that aligned with the Chinese government. The people are afraid of speaking out for fear of retribution, Bocchi shares, but they are also afraid of losing their rights to worship freely.

Although the protests started peacefully, once the police got involved it became dangerous, according to Bocchi. “I was hit by a rubber bullet on my arm when I was on the side of the protesters. So the police don't really discriminate even though I was wearing a press vest, which is a yellow vest.”

These protestors aren’t just activists, but everyday people afraid of being suppressed, persecuted, and silenced, like they see happening on mainland China.

You won’t want to miss this special inside look at what is happening on the ground in the Hong Kong protests.