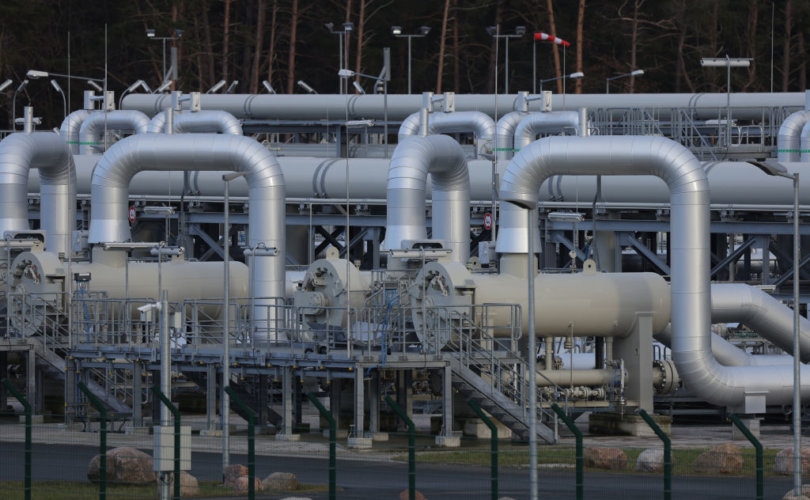 Pipes stand at the receiving station of the Nord Stream 2 gas pipeline on February 02, 2022 near Lubmin, Germany. Nord Stream 2, which is owned by Russian energy company Gazprom, is to transport Russian natural gas from Russia to Germany along over 1,200km of twin pipeline stretching across the bottom of the Baltic Sea. Sean Gallup/Getty Images

(LifeSiteNews) – Detonations in the Baltic Sea on Monday caused serious damage to the two major gas pipelines between Russia and Germany.

Experts believe that this was a deliberate, targeted attack on the pipelines, causing speculation of U.S. involvement after President Joe Biden had said in February that “If Russia invades […] then there will be no longer a Nord Stream 2. We will bring an end to it.”

A sudden pressure drop had been registered on Monday at the two Baltic Sea pipelines, Nord Stream 1 and Nord Stream 2, which transport gas from Russia to Western Europe. According to Swedish authorities and the operating company NordStream AG, three leaks were detected at the pipes in Danish and Swedish territory – two leaks at NordStream 1, northeast of the Danish island of Bornholm, and one leak at Nord Stream 2, southeast of the island.

Commentators have characterized the destruction of the pipes, which has released  huge amounts of natural gas into the sea and air, as “one of the great environmental catastrophes of our time.”

Bjorn Lund of the Swedish Seismological Center at Uppsala University told broadcaster SVT: “There is no doubt that these were explosions” while German research center GFZ reported that there was no evidence of earthquakes at the time the incident occurred.

“Our imagination no longer yields a scenario that is not a targeted attack,” a source privy to the assessment by the German government and federal authorities said, German news outlet Tagesspiegel reported, “Everything speaks against a coincidence.”

The consensus among experts and politicians, that the incident was not an accident but a deliberate attack, leaves open the question of who might be behind the incident.

Speculation that the U.S. caused the damage was amplified by comments Biden made in February: “If Russia invades [Ukraine] …  then there will be no longer a Nord Stream 2. We will bring an end to it.” A reporter then asked the president how he would do that since the pipeline is under Germany’s control. Biden responded by saying: “I promise you we’ll be able to do it.”

Similar comments were made by U.S. Under Secretary Victoria Nuland in January when she said: “If Russia invades Ukraine, one way or another, Nord Stream 2 will not move forward.”

Furthermore, a few days prior to the incident at the pipelines, a U.S. fleet participated in NATO maneuvers in the Baltic Sea and docked at numerous ports in Germany, Scandinavia, and the Baltic states. The fleet included the amphibious assault ship USS Kearsarge and carried 4,000 soldiers and 40 helicopters.

Speculations were further amplified when a former Polish Defense Minister and current member of the European Parliament, Radek Sikorski, tweeted “Thank you, USA.”, alongside a picture of the water surface above one of the gas leaks. The parliamentarian later deleted the message.

The Polish MEP added in another deleted tweet, “As we say in Polish, a small thing, but so much joy. #Nordstream,” expressing his delight over the leaks in the pipelines. In addition, Sikorski retweeted Biden’s comments from February of this year about bringing an end to Nord Stream 2, but again removed the message from his social media account days later.

Although deleting his initial social media posts celebrating the destruction of the pipelines and claiming that U.S. forces were behind the sabotage, Sikorski later shared a mock image of a Russian passport apparently found at the surface above the damaged gas supply.

Among people who think that the U.S. could have launched the attack on the pipelines is the journalist and editor-in-chief of Compact Magazine, Jürgen Elsässer.

Tucker Carlson also commented on the incident on his Tuesday show, saying that it would be “stupid” for Russian President Vladimir Putin to blow up his own gas pipeline since Europe needs the gas and it is Russia’s biggest leverage against Europe. “Under these circumstances, there is no chance you would blow up Nord Stream 1 or 2”, Carlson said.

Carlson called the sabotage of the gas pipelines an “act of industrial terrorism” and speculated that the Biden administration may have committed it.

The primetime host pointed to the glaring hypocrisy of destroying a pipeline which is now pumping “millions of cubic meters of natural gas into the Baltic Sea,” creating a “toxic bubble field more than half a mile wide” from the “president who has declared climate change is the most pressing emergency in the history of the world.”

“The lasting damage may be to the atmosphere. Natural gas is comprised of up to 90 percent methane. Methane, as Joe Biden has often told you, is the key driver of global warming, which is of course an existential threat to humanity and the planet,” Carlson said, adding that one “can only guess at how many marine animals are being killed right now: countless.”

“[If] you’re worried about climate change, what just happened to the Nord Stream pipelines is as close to the apocalypse as we have ever come.”

Additionally, Carlson noted that if the government did destroy the gas supply line “it would be one of the craziest, most destructive things any American administration has ever done,” and that it could lead to an all-out war with Russia.

“That would be an unimaginably reckless act. That would be the kind of thing you would do if you wanted to start a nuclear war. It would be insane.”

Moreover, Carlson cited a $35 million spending bill advanced in the U.S. Senate the same night of the incident which is meant “to prepare for and respond to potential nuclear and radiological incidents in Ukraine.” A further indication that the U.S. government may expect an escalation of the war following the attack on the pipelines, according to the Fox News anchor.

Dr. Maximilian Krah, a member of the European Parliament from the German party AfD said in a tweet:

#Nordstream: Since both pipelines are affected, coincidence is out of the question. Naval divers are needed to carry out acts of sabotage on the seabed. Here, a state has committed an act of sabotage against Germany. And it certainly wasn’t Russia.

Another theory about the alleged attack suggests that it could have been a so-called “false flag” operation by Russia, which is meant to cause uncertainty and division among Western nations and further drive up gas prices. Alternatively, Tagesspiegel names “Ukrainian forces or forces associated with Ukraine” as possible perpetrators.

On the same day that the alleged act of sabotage occurred, the new Baltic Pipe natural gas pipeline between Denmark and Poland was inaugurated. Polish President Andrzej Duda said that the project would end the country’s dependence on Russian gas.

In the weeks leading up to the alleged attack on the pipelines, demonstrators in Germany have called for the opening of Nord Stream 2 in order to secure Germany’s energy supply. As LifeSiteNews reported in July, the opening of the newly built Nord Stream 2 pipeline was halted and its certification suspended by German Chancellor Olaf Scholz following the start of the Russia-Ukraine war.

In addition to possibly aggravating the energy crisis and increasing political tensions, this gas leak is also a massive “safety and environmental hazard,” according to analysts at Eurasia Group. Reuters reported that Danish and Swedish authorities declared a no-shipping zone around the location of the suspected leak in their maritime zones while Denmark raised its power and gas safety alert level.