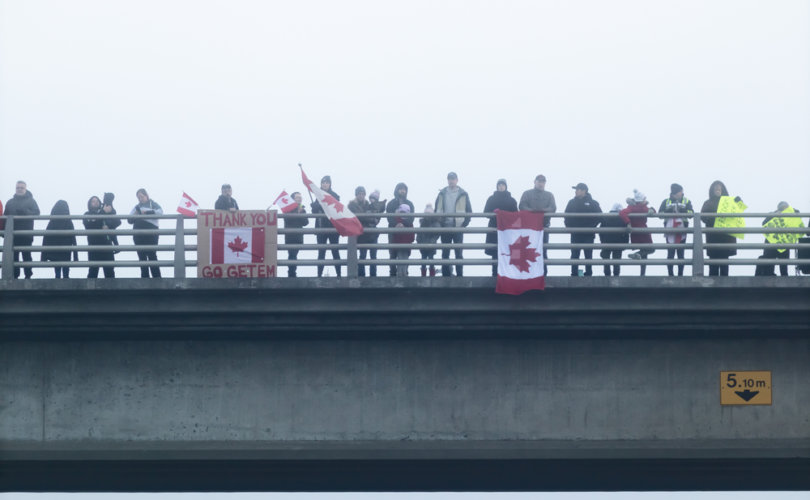 Protesters gather on an overpasses on Highway 1 on January 23 in Chilliwack, British Columbia, to protest the coronavirus vaccine mandate for truck drivers.Shutterstock

(LifeSiteNews) – The “Freedom Convoy 2022” truckers’ group blasted the Canadian Trucking Alliance (CTA) as “spineless” after the association said it “strongly” disapproves of the thousands of truckers driving to Ottawa this week to protest COVID mandates.

In a statement sent out this past Saturday, the CTA said it “disapproves of any protests on public roadways, highways, and bridges.”

“CTA believes such actions – especially those that interfere with public safety – are not how disagreements with government policies should be expressed.”

CTA president said that a federal COVID jab mandate is not “not changing so, as an industry, we must adapt and comply with this mandate.”

In a January 24 Facebook post, organizers for the “Freedom Convoy 2022” wrote, “The Canadian Trucking Alliance is a spineless private organization that does not speak for us.”

The group also noted that they are not “anti-vaccination” but rather “anti-government mandates.”

“No more lockdowns. No forced vaccination (and yes, it IS force when you choose between a shot you don’t want and your ability to feed yourself),” wrote the group.Thousands of Canadian truckers have joined in the “Freedom Convoy 2022,” which began its “slow roll” to Ottawa this weekend to protest draconian COVID jab mandates and other virus rules imposed by Canadian Prime Minister Justin Trudeau and provincial premiers.

Chris Barber of Swift Current, Saskatchewan, who is a trucker driving in the convoy and is also one of the “Freedom Convoy 2022” organizers, said in an online video posted Monday that he was “never” aware of the CTA until recently.

“I’ve been in this industry 28 years in Canada, I’ve never heard of the Canadian Trucking Alliance, nor have they ever spoken for me,” said Barber, who goes by the Tik Tok handle BigRed19755.

“Probably 90 percent of the drivers out here don’t give a *hit about the Canadian Trucking Alliance.”

“This industry is bigger than this. This isn’t anti-vaccine. This is anti-mandates. If you guys want to run around with a QR code tied to your body, showing everybody your stuff like they did back in the 30s in Germany, then go ahead,” said Barber.

“But there’s some of us out here that think this country is still free. Fortunately, and we’re going to try and get that back. This has nothing to do with anti-vax. I’ve seen people go with the separatist idea. I’ve seen to go with the anti-vax thing racist. Misogynistic. I mean, hey, why not? It comes right from the prime minister’s mouth. So keep this together.”

The CTA statement from Saturday seems a bit at odds with what the group had said earlier. On January 5, the CTA said there were looking to meet with government officials to “determine a more suitable date for enforcement that would be much less disruptive to the North American supply chain.”

“CTA continues to caution the Government of Canada that implementing a domestic mandate on federally regulated carriers and their employees will further exacerbate the driver shortage, disruption to the supply chain and rising costs on consumers,” said the group at the time.

Tamara Lich, the main organizer of the “Freedom Convoy 2022” group who is from Medicine Hat, Alberta, said repeatedly that the convoy will be a peaceful protest, pointing out she has been working with law enforcement to ensure that the convoy is done in accordance with all local laws.

She noted that if anyone in the convoy sees someone acting outside the law, they are to be reported to the police at once as they are “not part” of the official convoy.

The “Freedom Convoy 2022” group has raised $4.7 million and counting in only 11 days, seeing grassroots support for Canadian truckers against both a COVID jab mandate for all haulers crossing the border and other virus rules increase at an astonishingly rapid pace.

However, reports have surfaced that GoFundMe has temporarily frozen the group from accessing its funds.

Barber spoke with LifeSiteNews and clarified that while GoFundMe has temporarily prevented them from distributing funds, the page is still taking donations and has not been shut down.

Barber said they are working through a bunch of “red tape” to work things out with the help of the group’s finance committee so that the funds can be made available.

The funds raised will go toward the cost of “fuel, food and lodgings to help ease the pressures of this arduous task.”