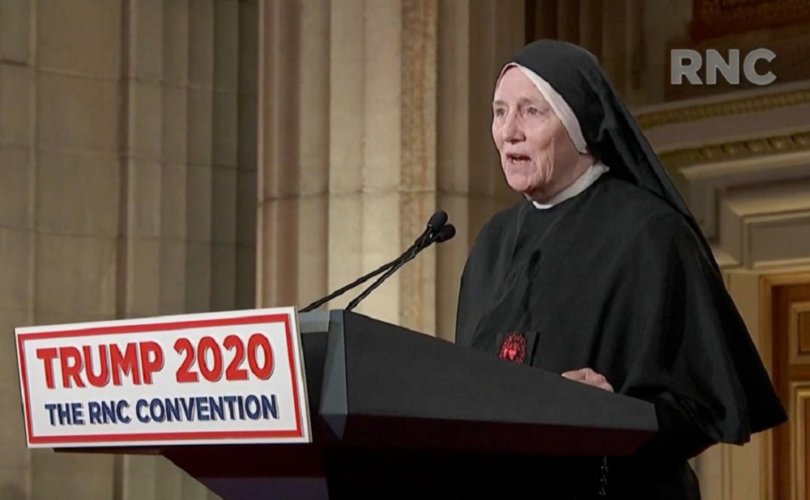 (LifeSiteNews) – Sister Deidre “Dede” Byrne has come to the defense of Father Frank Pavone, calling his laicization a “travesty” and raising concerns about the Vatican’s favorable treatment of heterodox and abusive priests.

“The most vocal pro-life priest has been laicized,” lamented Sister Byrne, a member of the Little Workers of the Sacred Hearts order in Washington, D.C.

“In the wake of this travesty,” she said, “we still have the most pro-death, anti-nuclear family president in our nation’s history who professes to be a Catholic in good standing.” She added that the Vatican and most U.S. bishops have provided “no real guidance” regarding Joe Biden’s scandalous behavior.

Sister Byrne, who rose to national prominence for her fiery speech at the 2020 Republican National Convention, also contrasted Pavone’s laicization with the Vatican’s leniency toward serial abuser Father Marko Rupnik and other problematic clerics.

“Fr. Marko Rupnik is excommunicated in 2019 for sexually abusing religious sisters and then absolved them in Confession. However, this same priest was permitted by the Holy See to create the logo for the 2022 World Meeting of Families,” she noted.

“What appears to many of us Catholics who love our Church is selective ‘mercy’ from the Pope of Mercy.”

The orthodox nun urged Catholics to pray for Pavone and other priests who are “canceled for speaking truth.”

As LifeSiteNews has reported, Archbishop Christophe Pierre, the apostolic nuncio to the United States, announced Fr. Pavone’s laicization in a December 13 letter to U.S. bishops. The Vatican charged the famed pro-life priest with “blasphemous communications on social media” and “persistent disobedience of the lawful instructions of his diocesan bishop.”

Pavone has strongly refuted the allegations. Canon lawyer and EWTN contributor Father Gerald Murray has pointed out that laicization is not listed in the Code of Canon Law as a penalty for alleged blasphemy and disobedience.

What just happened? More confusion, that’s what has happened. And the devil is the author of confusion. Our world is more turbulent than ever. The most vocal pro-life priest has been laicized.

What crime has he done to warrant such a harsh punishment?

In the wake of this travesty, we still have the most pro-death, anti-nuclear family president in our nation’s history who professes to be a Catholic in good standing … with no real guidance from a majority of our bishops or the Vatican.

Confusion is further exemplified by Catholic Faithfuls (and our non-Christian brothers and sisters, the Uyghurs) persecuted in China by the CCP with again no support from our Catholic leadership. Cardinal Zen, who is also the most vocal cleric against the CCP-Vatican accord, is found guilty of a charge relating to his role in a relief fund for Hong Kong’s pro-democracy protests in 2019. There is no outcry from the Vatican.

A Jesuit priest is the greatest promoter of LGBT behavior, and the Vatican greets him with open arms.

Another Society of Jesus (Jesuit) priest, Fr. Marko Rupnik, is excommunicated in 2019 for sexually abusing religious sisters and then absolved them in confession. However, this same priest was permitted by the Holy See to create the logo for the 2022 World Meeting of Families and given permission to preach in 2020 a Lenten meditation for priests in the Roman Curia, including Pope Francis.

Again, I do not know what Fr. Pavone did to warrant laicization (and now he is added to the growing list of Canceled Priests), but what appears to many of us Catholics who love our Church is selective “mercy” from the Pope of Mercy.

Please pray for Fr. Pavone and all our dear priest who canceled for speaking truth.