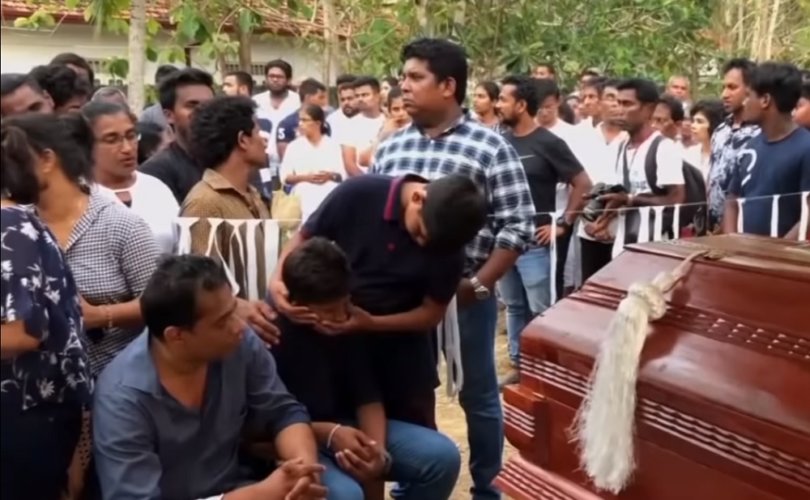 COLOMBO, April 24, 2019 (LifeSiteNews) — On Easter Sunday, just minutes after a group of evangelical Christian children committed their lives to Jesus Christ even unto martyrdom, a Muslim terrorist bomb killed them in Sri Lanka.

“Today was an Easter Sunday school at the church and we asked the children how many of you willing to die for Christ? Everyone raised their hands. Minutes later, they came down to the main service and the blast happened. Half of the children died on the spot.”

These photos were taken at Zion Church in Sri Lanka during Sunday School moments before the blast.

22 of these children died. Moments before the blast, the Sunday school teacher asked these kids if they are ready to die for Jesus – they all raised their hands. pic.twitter.com/49TTB2FrJJ

Christians make up approximately 7 percent of the 21 million people of Sri Lanka, an island nation southeast of India that weathered decades of deadly ethnic strife. The Sunday attack exacted the worst toll on Christians in the nation’s history and was the worst terrorist incident since the end of the civil war in 2009. Muslims make up about 8 percent of Sri Lanka, which is mostly Buddhist. The terrorist ISIS Muslim sect has engaged in sectarian warfare in Syria, Iraq, and Lebanon for several years and is responsible for serial acts of rape, forced conversions, crucifixions, beheadings, and property expropriations. It has been largely defeated in the Middle East.

At about 8:30 A.M. on Sunday, Pastor Kumaran of Zion Church, an evangelical Christian congregation in Batticaloa on Sri Lanka’s eastern coast, greeted a man he did not recognize who came to the entrance of the church. Kumaran told the Times of India, “I asked him who he was and his name. He said he was a Muslim and wanted to visit the church.” The stranger would detonate a bomb just seconds later.

Kumaran argued with the stranger but was called away by fellow clergy to go to the podium of the church. Seconds later, Kumaran said, as he was walking away, a explosion shook the church. Turning around, he saw spattered blood and the bodies of his congregants scattered on the floor. Among them were the children who had been ushered from their Sunday school classroom to the main worship space. “Twenty-eight people were killed, among them 12 children. Two are critical,” Kumaran said. There were 300 worshipers in the church at the time of the blast.

Among the dead was the teenage son of Pastor Ganeshamoorthy Thirukumaran. Thirumakaran recalled for AFP that he had welcomed the bomber into the worship space. Even though the attacker was a stranger, Thirumakaran asked him to sit down. Moments later, the bomb went off.

Besides the attack on Zion Church, the Muslim terrorists targeted St. Anthony’s Shrine in Colombo, the capital, and St. Sebastian’s Church in Negombo, in addition to luxury hotels in Colombo, including the Shangri-La, the Cinnamon Grand, and the Kingsbury. The bodies of many of the dead, especially children, were severely disfigured by the blast. At St. Anthony Shrine in Colombo, a local priest said that in some cases, only the shoes of the children can serve for identification.