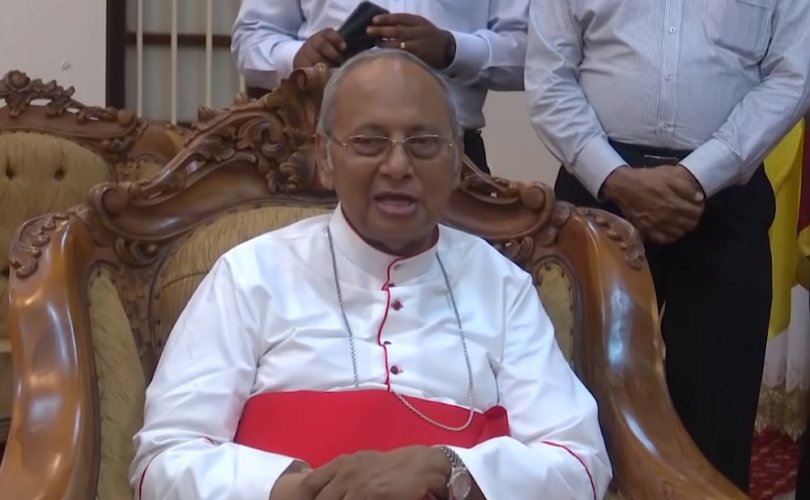 COLOMBO, May 1, 2019 (LifeSiteNews) — Cardinal Malcolm Ranjith of Sri Lanka affirmed that Masses will be publicly celebrated throughout the country on Sunday but called for additional military response in the aftermath of the deadly Muslim terror attacks on Easter Sunday.

On Tuesday, Cardinal Ranjith, who is archbishop of Colombo, said Masses will resume on Sunday. “But we will start with a smaller number of masses and see if we can slowly increase it depending on how the situation develops,” he said. The Catholic Church continues to monitor the Sri Lankan government’s probe of the attacks that took the lives of as many as 320 people at three Catholic churches, an evangelical Christian church, and hotels in the island nation.

While soldiers and armoured vehicles have bolstered security at his residence in the capital city in a show of increased security, Cardinal Ranjith is eschewing the bulletproof limousine provided by the government. Saying he will travel in an ordinary automobile, he said, “I am not afraid. I don’t need bulletproof vehicles to go about. The Lord is my protector.” He added, “But I want security for my people, and for the country.” Soldiers will guard churches on Sunday, where metal detectors and other measures will be in place.

Earlier, Cardinal Ranjith called on the government to increase security “as if on war footing.” He told reporters, “All the security forces should be involved and function as if on war footing,” and added, “I want to state that we may not be able to keep people under control in the absence of a stronger security program.” Ranjith said, “We can’t forever give them false promises and keep them calm.” Additional security is necessary, Ranjith said, so “the people don’t take the law into their own hands.” However, he sought to reassure Muslims that the Church forbids revenge attacks.

Reports are circulating that Sri Lankan police had been informed of a possible Muslim terrorist attack, but the military was apparently not kept in the loop. The possibility that advance notice of the attacks had been concealed by the government is “extremely serious,” said Ranjith, because “it means that the massacre could have been avoided.” He asked, “If our local security agencies do not do their job, to whom can we turn?”

LifeSiteNews asked for comment from several Catholic academics about the appropriateness and proportionality of Cardinal Ranjith’s call for putting Sri Lanka on a “war footing.” In an email response, Associate Professor John Rao of St. John’s University, New York City, wrote that Ranjith was summoned by the Sri Lankan government to help with the troubles. Rao wrote that Ranjith’s judgment in the matter should be considered “very seriously indeed.” However, he questioned why Masses should be cancelled while suggesting that churches should be more vigorously protected. “Life is dangerous,” he affirmed.

Professor Stephen Schneck of the Catholic University of America, Washington, D.C., responded to LifeSiteNews, saying Sri Lanka’s government has yet to provide adequate security for churches and schools. “Cardinal Ranjith’s decision seems prudent and proportional for the time being,” he wrote, “pending the Sri Lankan government’s soonest development of effective measures to protect religious gatherings from more mass killings.” Even in the U.S., Schneck wrote, “no government can promise perfect security for worship.” In an age when believers are targeted, Schneck wrote, “[w]e cannot let fear win, of course, but the danger now to Sri Lankan Christians requires extreme care as we wait for government there to better address the immediate threat.”

According to Reuters, U.S. ambassador to Sri Lanka Alaina Teplitz said Muslim terrorists remain at large and may be planning further attacks. “Tremendous progress has been made towards apprehending those plotters but I don’t think the story is over yet,” Teplitz said. Local security forces fear that more attacks may be in the offing while Muslims prepare for the month of Ramadan, which begins on May 6.

The deadly attacks were allegedly committed by nine Sri Lankan Muslims of the Wahhabi sect who are affiliated with the Islamic State (ISIS) terrorist organization. In a video released by ISIS, alleged leader Zaharan Hashim is shown leading terrorists in pledging their fealty to ISIS and mastermind Abu Bakr al-Baghdadi. ISIS has claimed responsibility for the attacks.

President Maithripala Sirisena put emergency measures into place and banned face coverings. While he did not specifically describe the niqab and burka facial coverings used by Muslim women, some critics assert that the order violates the rights of Muslims. However, some Muslim scholars advised that believers “should not hinder the security forces in their efforts to maintain national security by wearing the face cover (Niqab).”

Authorities have blamed the National Thowfeek Jamaath Muslim sect for the attacks. At least 150 suspects have been detained and questioned.

Sri Lanka is a majority Buddhist country, where Christians and Muslims constitute small minorities. The country was rocked by war that lasted nearly 30 years, ending in 2009, that pitted the terrorist Tamil Tiger independence movement against the government. About 80,000 Sri Lankans were killed, mostly civilians.