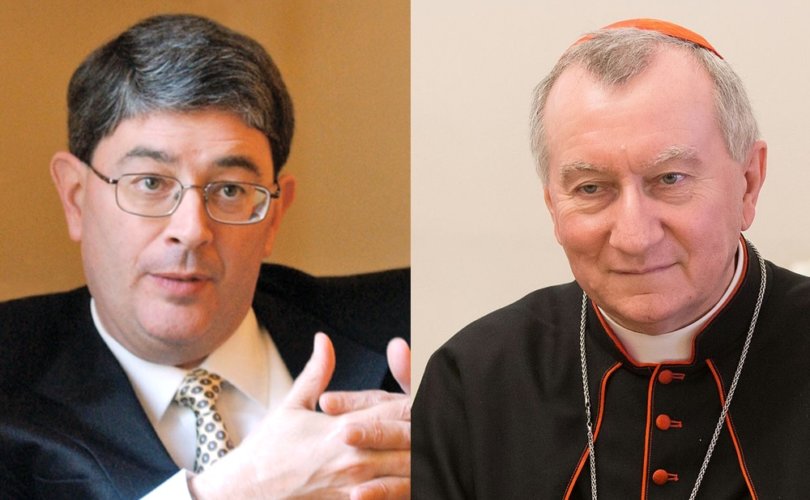 “The Catholic Church doesn’t do “paradigm shifts,” ​the Catholic theologian wrote in a First Things column this week.

“A 'paradigm shift' signals a dramatic, sudden, and unexpected break in human understanding—and thus something of a new beginning,” wrote Weigel, adding a little later that such a “shift” in the Catholic Church is impossible.

Cardinal Parolin had described the pope’s controversial 2016 exhortation on marriage and the family as a “paradigm shift” in an interview with Vatican Radio published January 11.

The Vatican Secretary of State had said that “at the end of the day, Amoris Laetitia has emerged as a new paradigm that Pope Francis is conducting wisely, prudently and also patiently.”

Parolin said the “difficulties” generating from the document and which “still exist in the Church, beyond certain aspects of its content, are due precisely to this change in attitude that the Pope is asking of us.”

“It’s a paradigm shift,” he stated, “and the text itself insists on this, that’s what is asked of us — this new spirit, this new approach!”

Cardinal Parolin is one of the most powerful Curial officials and has been regarded by Vatican watchers as positioned to succeed Francis.

Weigel called Parolin's use of the phrase “unfortunate.”

He argued that while there is genuine “development of doctrine” rooted in the revelation that ended with the death of the last apostle, there can be no “paradigm shift.”

“So the evolution of the Church’s understanding of the gospel over the centuries is not a matter of 'paradigm shifts,' or ruptures, or radical breaks and new beginnings; it’s a question of what theologians call the development of doctrine,” he wrote.

“And as Blessed John Henry Newman taught us, authentic doctrinal development is organic and in continuity with “the faith once . . . delivered to the saints” (Jude 1:3). The Catholic Church doesn’t do rupture: that was tried 500 years ago, with catastrophic results for Christian unity and the cause of Christ.”

Weigle noted that where something reminiscent of a radical break is occurring is in the exhortation’s dissimilar implementation by dioceses throughout the world – making the Catholic Church look like the Church of England’s fragmented present-day incarnation, “and this is ominous.”

“The pastoral implementation of Amoris Laetitia mandated in Malta, Germany, and San Diego is quite different than what has been mandated in Poland, Phoenix, Philadelphia, Portsmouth, England, and Edmonton, Alberta,” he noted.

“Because of that,” he said, “the Catholic Church is beginning to resemble the Anglican Communion (itself the product of a traumatic “paradigm shift” that cost John Fisher and Thomas More their heads).”

“This fragmentation is not Catholic,” Weigel said. “Catholicism means one Lord, one faith, one baptism, and unity is one of the four distinctive marks of the Church.”

“That unity means that the Church embodies the principle of non-contradiction,” he explained, “such that a grave sin on the Polish side of the Oder River can’t be a source of grace on the German side of the border.”

Amoris Laetitia has been a continual source of consternation for lay Catholics and clergy since its April 2016 promulgation due to its ostensive granting of Holy Communion to “remarried” Catholics.

Various bishops and cardinals say that allowing the sacrament to unrepentant couples living in so-called “irregular” unions equates to an effective rejection of the Church’s established teaching on the indissolubility of marriage, adultery, and worthiness to receive Communion.

Varying bishops’ conferences worldwide have implemented the document in drastically different ways. Some insist it does not depart from Church teaching on marriage. Others, however, interpret the exhortation’s ambiguous language as allowing Communion for couples living in objectively sinful situations.

Weigel suggested a way to stop the current “fragmentation” experienced by many within the Church.

“Something is broken in Catholicism today and it isn’t going to be healed by appeals to paradigm shifts,” he said.

“In the first Christian centuries, bishops frankly confronted and, when necessary, fraternally corrected each other. That practice is as essential today as it was in the days of Cyprian and Augustine—not to mention Peter and Paul,” he added.