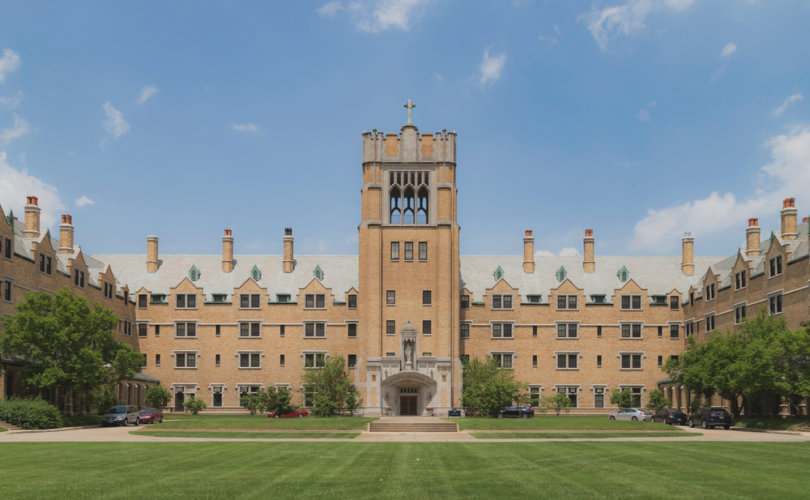 NOTRE DAME, Indiana (LifeSiteNews) – The small Catholic girls’ college of Saint Mary’s in Notre Dame, Indiana, opened an “LBGTQ+ Center” this month in an apparent effort to create “an inclusive and safe space for our LGBTQ+ community and Allies.”

In an October 7 ceremony, while standing alongside faculty and invited speakers — all of whom donned rainbow-patterned face masks — newly inaugurated college president Katie Conboy unveiled the pro-LGBT center as an apparent affirmation of “the Catholic Church’s belief that all persons must be accepted with respect, compassion and sensitivity.” The center was opened along with a newly established Office for Student Equity, part of the college’s Division for Inclusion and Equity.

The small Catholic college was opened in 1844 by the Sisters of the Holy Cross and has an all-female student body of around 1,600.

Redgina Hill, the college’s vice president for inclusion and equity, explained during the ribbon cutting ceremony that “[a] recent Saint Mary’s College student climate survey revealed that our LGBTQ students had more difficulties making friends and did not always feel welcome,” adding that “[t]hese findings pointed to a dire need for a safe space at Saint Mary’s for our LGBTQ+ students.”

Hill said that though she cannot know the history of “our queer students, faculty and staff who have walked these halls since 1844,” that she is certain “not all have felt welcomed or safe to be their authentic selves.”

Hill expressed her hope that the pro-LGBT center might act as a sign that the college is “a place they [LGBT-identifying students] can call home.” She derided traditional Catholic customs regarding human dignity and sexuality as “barriers that hold communities back.”

The college’s student-run newspaper, The Observer, reported that the focal piece of the center is a large mural entitled “When Our Colors Unite,” which depicts “a flurry of multicolored stripes converging into a spiral.”

To help launch the center alumna Jacqueline Leskovec, a founding member and the vice president of Pride SMC, the college’s official group of “LGBTQ-identifying” alumni, was invited to speak at the event. Leskovec took the opportunity to explain her own experience of being a homosexual while at the college in the 1970s, employing some of the complex jargon used by the homosexual lobby.

“When I first came out, I was a student here at Saint Mary’s, and I could only dream of such a welcoming place for LGBTQIA students on campus,” she said. “Back then, being out was not easy — and that’s not saying it’s easy today. But visibility, acceptance and a safe space help us all along the road to self-actualization as we become the people we are.”

The college invited Sister Jeannine Gramick SL, co-founder of the ardently pro-homosexual advocacy group New Ways Ministry, to the event. In 1999, the Congregation for the Doctrine of the Faith, headed by then-Cardinal Joseph Ratzinger, issued an official reprimand to Gramick, declaring her writings on sexuality to be “doctrinally unacceptable” on the basis that she did “not faithfully convey the clear and constant teaching of the Catholic Church” regarding “the intrinsic evil of homosexual acts and the objective disorder of the homosexual inclination.”

The Catechism of the Catholic Church clearly enunciates that, based on Sacred Scripture, “which presents homosexual acts as acts of grave depravity,” the Church has consistently instructed the faithful that “homosexual acts are intrinsically disordered.” “Under no circumstances can they be approved.”

According to the New Ways Ministry website, Gramick spoke at the event about “her experiences from 50 years of LGBTQ ministry.” Robert Shine, the associate director of New Ways Ministry, appeared alongside Gramick, leading “a workshop for students, faculty, and staff on how Catholic campuses can take the next steps on their journey to inclusion.”

New Ways Ministry has listed Saint Mary’s College as one of 130 Catholic colleges within the United States which are supposedly “LGBTQ-friendly.”

LifeSiteNews reached out to both Saint Mary’s College and the Diocese of Fort Wayne-South Bend for comment on the opening of the “LGBTQ+ Center,” but received no reply in time for publication.

Saint Mary’s College is not South Bend’s only Catholic institute of higher education to betray Catholic principles. Its prominent neighbor, the University of Notre Dame, has long been in a state of religious decline, aligning itself ever more closely with the secular culture than with the traditions of her Catholic patrimony.

Last year, Notre Dame hired Pete Buttigieg, a pro-abortion homosexual who is “married” to another man, as a teacher and researcher for 2020–2021 academic year. A few years earlier, in 2016, the university awarded its most prestigious prize to then-Vice President Joe Biden. Despite his ardent pro-abortion stance, Notre Dame said that Biden’s “genius has ennobled the arts and sciences, illustrated the ideals of the Church and enriched the heritage of humanity.”