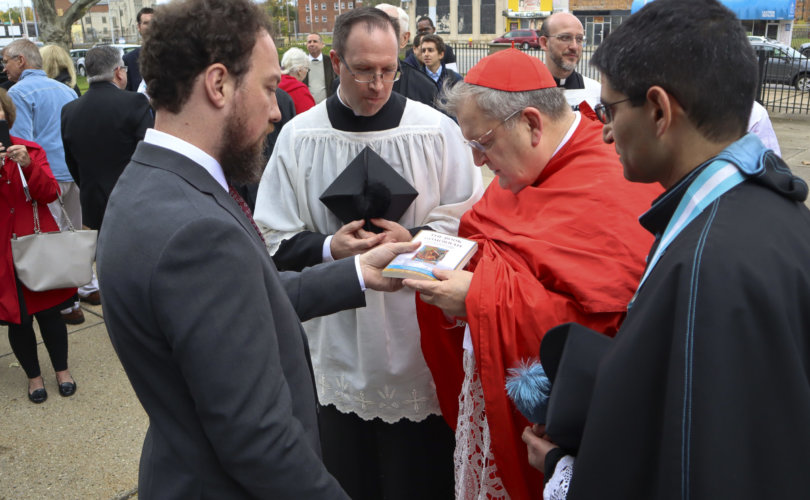 TACOMA, Washington, November 20, 2019 (LifeSiteNews) ― A group of Catholic laypeople has formed a society dedicated to fighting sexual corruption in the clergy.

The St. Peter Damian Society, which was founded earlier this year, believes the best response to the ongoing sex scandals among Catholic clergy can be found in ancient traditions of the Church and an almost 1,000-year-old book called The Book of Gomorrah.

Jonathan Carp, the general director of the society, told LifeSiteNews by email that the group, which now has approximately 250 “Damianites” members nationwide, began as a Twitter conversation about how the episcopal response to the clerical sexual abuse crisis seemed “far too corporate, rather than Catholic.”

“Hearing the reactions to the McCarrick news, and especially troubled by the way it was discussed by insiders as a sort of open secret, we decided to launch our Society as a stridently Catholic voice, calling for repentance, penance, and a full public accounting,” Carp explained.

“The driving force behind the episcopate's response to this crisis should be, as in all things, the salvation of souls, not the protection of property or the avoidance of lawsuits.”

In a press release, the St. Peter Damian Society advocates, among other things, the “widespread adoption by the hierarchy of public and private penances;” the excommunication of clerical sex offenders “and their enablers,” “full and transparent” audits of clerical sexual abuse and misconduct records, as well as financial records;” and the restoration of the Rite of Degradation.

The Rite of Degradation, reserved for the most serious crimes, involved stripping the clerical malefactor of the vestments appropriate to his office and even scraping his thumbs and index fingers with a sharp object to remove symbolically his power to offer Mass, consecrate, and bless. After the Rite, the ex-cleric would be handed over to civil authorities to face civil justice.

Carp said the Society had taken St. Peter Damian, the 11th century author of The Book of Gomorrah, as their patron because ”his life gives (them) an outstanding model for how the Church will be reformed.”

“St. Peter Damian called loudly and furiously for reform, and his calls were given weight by his undisputed personal holiness,” Carp said.

“As a man of great piety and humility devoted to personal asceticism, his holiness was readily apparent to all the people of his time, and his corrupt opponents could not credibly deny the force of his arguments nor impugn their source,” he continued.

“While in our corrupt age St. Peter Damian has become a sort of prototype for the ‘terrifying medieval saint,’ he was so beloved by the people that he never required a formal canonization: faithful Catholics did not need to be told that this man was a great saint.”

As well as personally performing weekly penances in reparation for the sexual misconduct of clerics, the Society has literally been putting copies of the most recent translation of St. Peter Damian’s The Book of Gomorrah into episcopal hands.

In this work, the Benedictine saint blasted the corruption of the clergy and condemned in particular their sexual sins, especially homosexual sexual acts and above all pederasty.

“These presentations serve as encouragement to the upright and admonishment to the corrupt, and the beauty of the project is that each bishop himself knows, upon being handed the book, into which category he falls without our presenters having to say anything,” Carp said.

“We are working with (LifeSiteNews’ own) Matt Hoffman, the translator, on this project, and are able to purchase books at cost for it.”

Carp added that anyone who has the opportunity to present the work to a bishop should contact the St. Damian Society (here), and they will send a copy.

One Society member, author and poet C.A. Shoultz, presented Bishop Michael Olson of Fort Worth, Texas with a copy of The Book of Gomorrah in September at St. Francis Assisi Catholic Church in Grapevine, Texas after the prelate consecrated the church’s new altar.

“His Grace was very receptive to me, and seemed appreciative of the book,” Shoultz told LifeSiteNews.

Shoultz stressed that Bishop Olson, like another recent recipient, Bishop Edward J. Burns of Dallas, didn’t explicitly endorse or recommend the Society, although both seemed to appreciate the gift. The Catholic author also underscored that liturgical or political leanings do not prejudice them for or against bishops: the Society’s interest is only in whether a cleric or prelate is “corrupt” or “honest.”

“As you know, one of the goals of the Society is to root out corruption and wickedness in the clergy and the hierarchy,” Shoultz said.

“If a priest or bishop is discovered to be corrupt, we want action to be taken against them.  We believe that 'corrupt' and 'honest' are the only two divisions that matter in this ongoing crisis.”

Other bishops who have been presented copies already include Cardinal Raymond Burke; Bishop Athanasius Schneider of Astana, Kazakhstan; and Bishop Robert Joseph Baker of Birmingham, Alabama.