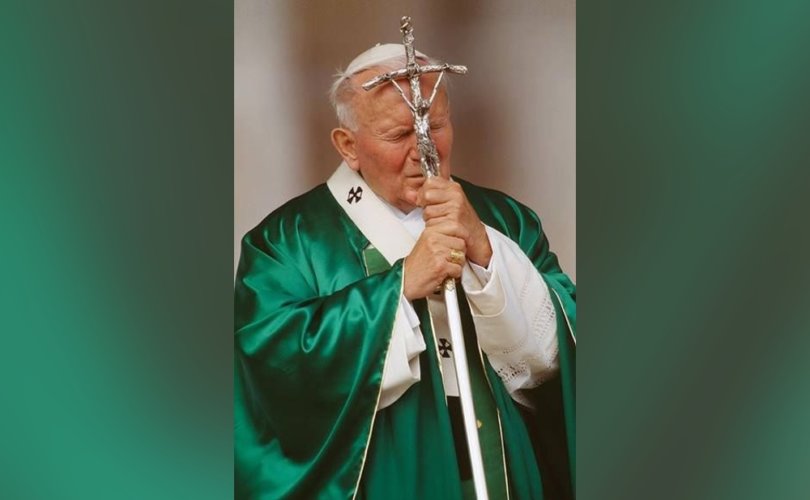 April 11, 2018 (LifeSiteNews) – Pope Saint John Paul II forewarned decades ago that priests, and indeed the Catholic Church herself, would pay a “high price” on account of remaining faithful to the Church’s perennial teaching on marriage and procreation.

The late pontiff said as well it would be a “very serious mistake” to presume that Catholic teaching on marriage is but an “ideal” in need of modification.

In his March 1984 address to Priests participating in a Seminar on “Responsible Procreation,” John Paul II spoke twice about the fact that men and women are entirely capable of grasping the Church’s teaching on marriage.

“Make no mistake: when your teaching is faithful to the Magisterium of the Church, you are not teaching something that men and women cannot understand. Even men and women today. Indeed, this teaching which you make resound in their ears is already written in their heart,” he said.

This teaching comes 32 years prior to Pope Francis’ suggestion that Catholic teaching on marriage is an “ideal” that is “too abstract, almost artificially constructed.” Critics have noted that Pope Francis’ 2016 exhortation Amoris Laetitia is pervaded by the notion that the Church’s teaching on marriage presents what the Pope calls an “artificial theological ideal” that is to be aimed at, rather than a reality that is binding on all.

Pope Francis’ teachings on marriage have caused numerous bishops and cardinals to champion practices contrary to Catholic teaching, such as welcoming so-called “second” marriages, supporting sexual activity (adultery) in such unions, and allowing such couples to receive Holy Communion.

Some of those who have spoken out against such novelties have been demoted, fired, or removed from prestigious posts.

John Paul II warned in his address about the cost of being faithful to the truth of marriage.

“You are well aware that often the fidelity of priests — indeed, let us say, of the Church — to this truth and to the consequent moral norms, those, I mean, taught by Humanae Vitae and Familiaris Consortio, often must be paid for at a high price. One is often mocked, accused of misunderstanding and harshness, and more,” he said.

“This is the fate of every witness to the truth, as we know,” he added.

John Paul II explained to priests how they must convey the Church’s teaching on the indissolubility of marriage, as prescribed by Christ, to the men and women in their care.

“When his contemporaries asked Christ if it was lawful for a husband to divorce his wife, he responded by referring ‘to the beginning,’ i.e., to the Creator’s original plan for marriage,” the pope said.

“You too, as priests working in the name of Christ, must show spouses that what the Church teaches about responsible procreation is nothing more than that original plan which the Creator has impressed on the humanity of the man and woman who enter into marriage, and which the Redeemer came to re-establish,” he added.

John Paul also said the moral norm taught by Humanae Vitae and Familiaris Consortio is the “defense of the whole truth about conjugal love, since it expresses the essential demands of this love.”