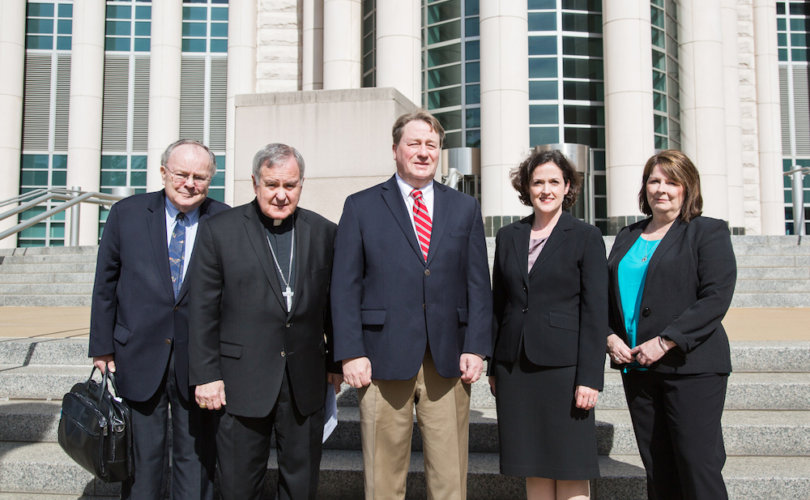 ST. LOUIS, Missouri, May 24, 2017 (LifeSiteNews) — The Roman Catholic Archdiocese of St. Louis, led by the Most Reverend Robert J. Carlson, has drawn a line in the sand for the protection of innocent human life.

Archbishop Carlson called the passage of Ordinance 70459 a “terrible moment” for St. Louis. “As a city resident and the leader of the oldest organized religion in the region, I am outraged that the City of St. Louis Board of Aldermen has now enshrined into law an ordinance which creates a 'sanctuary' for the despicable practice of abortion,” he said in a public statement.

“The laws of the City of St. Louis now actively protect and promote the killing of unborn children, who … will be denied their humanity and very existence.”

The Thomas More Society filed a lawsuit Monday against the pro-abortion ordinance on behalf of Carlson and his Archdiocesan Elementary Schools, Our Lady’s Inn Maternity Homes for pregnant women, and O’Brien Industrial Holdings.

“This ordinance does not exempt individuals with sincere religious, moral or ethical objections to abortion from its requirements in any way, and even for qualifying religious organizations, the exemption for employment … is extremely limited … vague and undefined,” Thomas More Society Special Counsel Sarah Pitlyk said. “That is unconstitutional, and directly violates both federal and state law.”

Furthermore, the ordinance forbids “Christian organizations and individuals whose teachings hold abortion to be a grave sin, from refusing to sell or rent property to individuals or corporate organizations that promote or provide abortions.”

The Archdiocese of St. Louis has 112 Catholic elementary schools and educates more than 23,000 students in kindergarten through eighth grade. A spokesperson for the archdiocese told LifeSiteNews that the city ordinance would be disastrous for their schools' fidelity to the Gospel.

Under the city ordinance, “our Catholic schools could not refuse to hire and could not discipline religion teachers who publicly support abortion in or out of the classroom, even though it is a grave sin under Catholic teaching,” the spokesperson told LifeSiteNews.

The archbishop went even further in his public comments. “St. Louis has chosen to continue down a path of promoting death, repression, resentment, division, and selfishness instead of promoting life, unity, charity, freedom, and goodness,” he charged.

The new law coerces people of faith to facilitate sin, according to the archbishop. “This horrible piece of legislation will now force city residents to be unwilling participants in the abortion business by requiring business owners and individuals to tacitly approve any 'reproductive health' decisions made by their employees or tenants,” he said.

Carlson, on behalf of all Catholics under his pastoral care, vowed to exercise civil disobedience against the ordinance. “Let me be perfectly clear: the Archdiocese of St. Louis and its affiliated agencies and ministries will not comply with … this oppressive law.”

Joining the fight against the city's pro-abortion ordinance is Our Lady's Inn Maternity Homes, which cares for homeless pregnant mothers and their children. Our Lady’s Inn gives them shelter and helps them attain educational goals, gain employment, and secure stable housing. The 35-year ministry has helped 6,000 women in crisis pregnancies overcome abortion pressure from boyfriends, parents, and grandparents and choose life for their babies.

Archbishop Carlson, a pro-life champion, did not mince words in speaking against the city's new law or its pro-abortion supporters. “The passage of this vile bill has been mistakenly heralded as a success for women by misguided organizations like NARAL and Planned Parenthood. The passage of this bill is not a milestone of our city’s success. It is, rather, a marker of our city’s embrace of the culture of death.”

Carlson said the fight is not about creed or color, but about humanity. “I welcome anyone, from any faith background, color, creed, or nationality, to join me in supporting, promoting, and protecting children, women, families, and life itself,” he said. “In this invitation, I echo the words of Pope St. John Paul II: 'Life will be victorious!'”

1
It’s beginning to look like the establishment will throw Zelensky under the bus to save face
2
How the US gov’t built a shadow structure that enabled COVID vax ‘bioterrorism’
3
Abp. Viganò: Our Lady’s humility is an intolerable affront to the ‘pride and disobedience’ of Satan
4
Ireland sees 42% more deaths in past two months compared to pre-COVID levels
5
‘Never Again’ documentary takes deep dive comparing COVID propaganda with Nazi Germany
Subscribe to Daily Headlines »