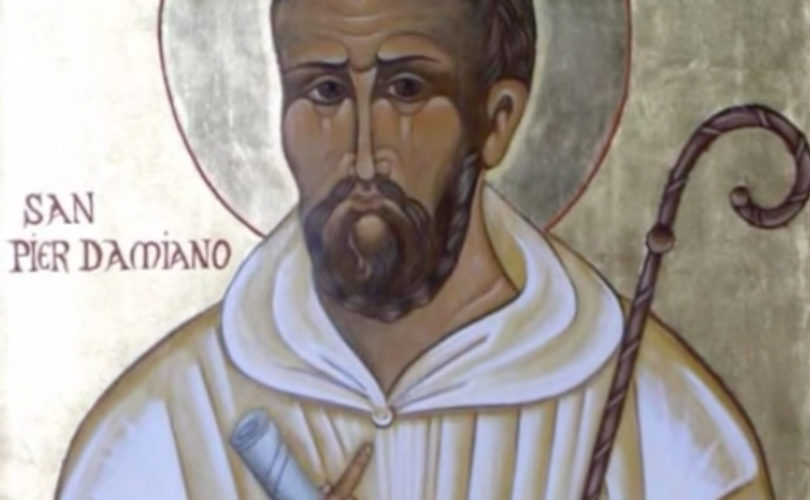 February 22, 2018 (LifeSiteNews) – The sex abuse summit at the Vatican opened up yesterday with prayers and speeches on the sex abuse crisis in the Catholic Church, all of which failed to mention that the summit was taking place on the feast day of St. Peter Damian, whose famous work, the Book of Gomorrah, warns against a plague of homosexuality and sex abuse in the priesthood.

Damian’s Book of Gomorrah decries the widespread sexual misbehavior, particularly homosexual sodomy, raging through the ranks of priests and monks in the 11th century Church, and asks Pope St. Leo IX to take decisive action to stop it, warning of catastrophic results should he fail to do so.

Damian noted that priests were having sexual relations with their “spiritual children,” those to whom they had given sacramental grace. He approvingly invoked a medieval ecclesiastical law requiring priests who sexually abuse minors to be publicly humiliated, imprisoned, and kept under guard in perpetuity to prevent a repetition of the crime.

However, Pope Francis, as well as the other bishops speaking on the opening day of the conference, never mentioned Damian nor the crisis of homosexuals in the priesthood of the Catholic Church, and even publicly denied any connection between the two phenomena.

Asked if a deliberate choice had been made to exclude the word “homosexuality” from the summit, summit speaker Archbishop Charles Scicluna of Malta responded that both homosexuality and heterosexuality are “human conditions that we recognize, and that exist, but they aren’t something that really predisposes to sin.”

Calls to address crisis of homosexuality in the priesthood repeatedly ignored

Damian’s warnings, as well as the penal strictures against homosexual behavior issued by several popes, have been systematically ignored by the Catholic hierarchy in recent decades, resulting in a massive crisis in the clergy of homosexual sex abuse of minors – who are mostly teenage boys – and young men, particularly seminarians.

Pope Francis has surrounded himself in Rome with clergy who are associated with what has been called the “gay mafia,” including clergy who are perceived as protégés of the recently-defrocked Theodore McCarrick. Some, such as Cardinal Walter Kasper, a close ally of Pope Francis, have repeatedly expressed a qualified approval of homosexual relationships.

Pope Francis is currently embroiled in a scandal in Argentina regarding a bishop known to be his “spiritual child,” Gustavo Zanchetta, who was made a bishop by Francis in 2013, and who fled to Francis in Rome in 2017 after resigning his diocese following repeated accusations of homosexual sex abuse of seminarians. Francis brought Zanchetta to live in his own residence of Casa Santa Marta in the Vatican, and assigned him to a high-ranking position in the scandal-ridden Administration of the Patrimony of the Apostolic See (APSA).

Meanwhile, repeated calls by high-ranking clergy as well as members of the laity to address the crisis of homosexuality in the priesthood have been met with silence.

Dr. Frédéric Martel, the homosexual French author of the new book In the Closet of the Vatican, even claims that Pope Francis and various clergy who participated in the 2014 and 2015 synods of bishops, sought to endorse certain aspects of homosexual relationships at that time, but were forced to retreat in the face of opposition from more conservative cardinals.

Editor’s note: LifeSiteNews readers can purchase The Book of Gomorrah at a special discounted price from Ite ad Thomam Books and Media here and will also receive a free copy of the e-book.