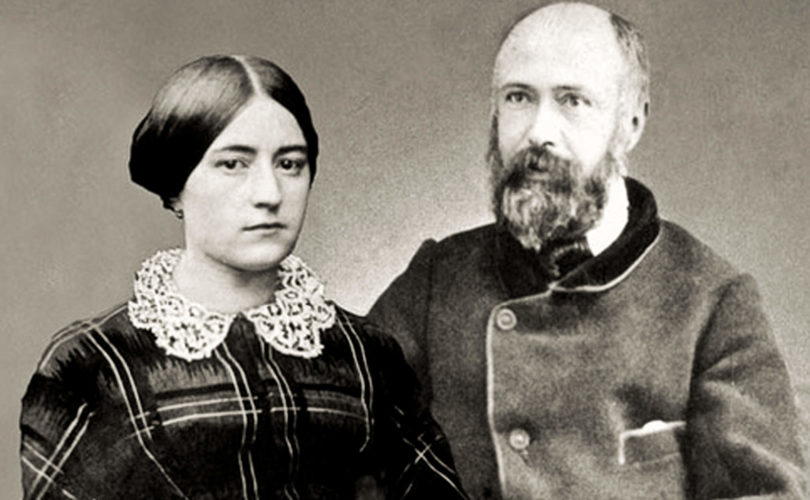 ROME, July 6, 2015 (LifeSiteNews) — Pope Francis has confirmed that Blessed Louis and Zélie Martin, the parents of St. Thérèse of Lisieux, will be canonized on October 18, while the Synod on the Family is underway in Rome.

The Martins will be the first married couple in the history of the Church to be declared saints at the same time.

Francis approved the decrees necessary for their canonization during a consistory of bishops at the Apostolic Palace in the Vatican.

Earlier this year the pope issued a decree stating that the “presumed miracle” of the healing of a baby girl, known as Carmen, who was born prematurely on October 15, 2008, was validly attributed to the intercession of Blessed Louis and Zélie Martin.

According to the promoters of the Martins’ cause for canonization, the miracle involves a little girl in the Archdiocese of Valencia, Spain, who was born three months prematurely with multiple life-threatening complications including a severe brain hemorrhage.

When doctors told the parents there was little hope for their daughter, the couple, along with family and friends, prayed to the Martins for their daughter. The little girl not only survived but is now completely healthy.

Father Antonio Sangalli, O.C.D., an Italian Carmelite friar who is vice-postulator of the cause of Louis and Zélie, remarked, “This is how it started, a real and intense communion of prayer of the family, of friends, of the monastery of Serra, of all those concerned for little Carmen, who was fighting against a sure death.”

Father Sangalli noted that as soon as the novena of prayers began, the baby began to get better, culminating in her “astonishing recovery, without any medical explanation.”

In the investigation into the “presumed miracle” Father Sangalli pointed out that “the child underwent a series of scientific tests” which found that she “had no consequences from the cerebral hemorrhage that she had suffered.”

Father Sangalli stated during the tribunal sessions investigating the miracle that “eighteen testimonies have been heard: Carmen's parents and grandparents, her teacher, a priest, four Carmelite nuns of Serra, and eight doctors.”

The supervising judge of the tribunal, Monsignor Ennio Apeciti, said that all eight doctors “joined in agreeing that, due to her severe health problems, the little girl should [medically speaking] have died.  All the physicians were astonished that Carmen survived.  They also believed that, due to her condition, she should have suffered significant physical and psychological consequences forever.”

Monsignor Apeciti noted that the doctors were astounded at Carmen’s “sudden, complete and lasting” cure and that she is “completely healthy” today.

At the conclusion of the investigation of Carmen's cure, Father Sangalli urged the faithful to “repeat with force that the Martins are a special marriage, an example to our families today. They are teachers in the field of faith, of education to domestic, ecclesial, and social sanctity.”

The date of Louis and Zélie Martin's canonization, October 18, will coincide with the 2015 Synod on the Family with the theme “The vocation and mission of the family in the church and the modern world,” that will be taking place from October 4 to 25 in the Vatican.

In another precedent-setting event, on July 2 the cause for the canonization of a fourth member of the Martin family, St. Thérèse's sister Léonie, was officially opened by Bishop Jean-Claude Boulanger of Bayeux-Lisieux in the chapel of the Visitation Monastery at Caen, France, where Léonie, who took the religious name Sister Françoise-Thérèse, lived from the age of 35 until her death in 1941 at the age of 78.

Father Sangalli, who is now Léonie's postulator, told Catholic News Agency that, “although she was expelled three times from the convent, she achieved her goal of becoming a religious, which shows that if we persevere, it is possible to do God's will.”

A website devoted to Léonie Martin notes that Léonie was ill from childhood, abused by a maidservant, expelled from school, isolated within her family, and that she tried religious life three times before she succeeded in 1899, at the age of 35, to be accepted at the Monastery of the Visitation at Caen.

When Léonie found a home at the Visitation, she wrote, “I am very happy–as happy as it is possible to be on this earth. When I look back on my past, as far back as my earliest childhood, and compare that time with this, I am overwhelmed with gratitude to the Heart of Jesus, who has enveloped me in so much love, and who has placed me in this loveliest anteroom of heaven, where I shall live and die.”

St. Thérèse of Lisieux’s parents to make history as first married couple to be canonized together