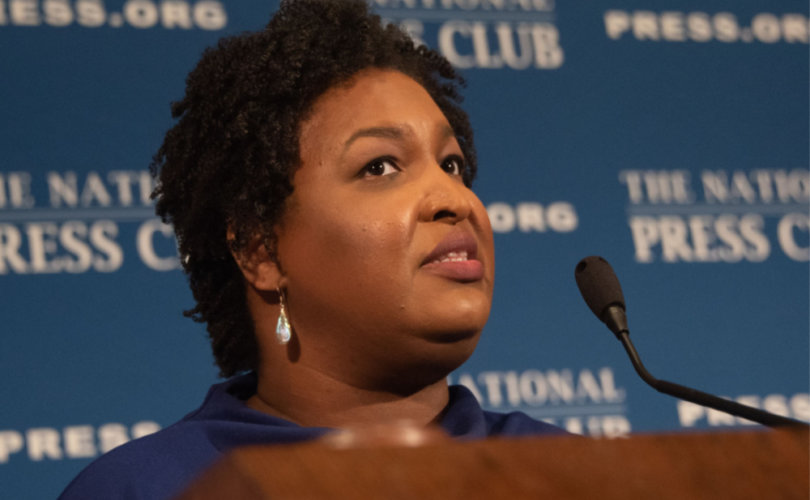 Abrams, the former Georgia House minority leader best known for persistent false claims about having the state’s gubernatorial election stolen from her in 2018, made the comments during an event at the Ray Charles Performing Arts Center.

“There is no such thing as a heartbeat at six weeks,” said Abrams, who has been calling heartbeat-based abortion bans “evil” since 2019. “It is a manufactured sound designed to convince people that men have the right to take control of a woman’s body.”

Georgia Democratic gubernatorial candidate Stacey Abrams: "There is no such thing as a heartbeat at six weeks. It is a manufactured sound designed to convince people that men have the right to take control of a woman's body."pic.twitter.com/DssWo1HpjK

That fetal heartbeats can be detected as early as six weeks was not seriously disputed until pro-life lawmakers decided to highlight the fact in heartbeat laws, which prohibit most abortions based on a criterion that is intuitively understandable to most people as an indicator of life, thereby promoting understanding of preborn personhood.

As detailed earlier this month at The College Fix by LifeSite’s Matt Lamb, mainstream medical authorities such as Mayo Clinic and Johns Hopkins affirm that, in the words of a textbook published by the latter, “the fetal heart begins beating as early as the 5th week after the” last menstrual period, with the same conclusion readily available from professionally-vetted websites such as Healthline and What to Expect.

Even the nation’s largest abortion giant, Planned Parenthood, has until recently acknowledged on its website that a “very basic beating heart” develops in the fifth and sixth week. The website has since been edited to claim that a “part of the embryo starts to show cardiac activity,” which “sounds like a heartbeat on an ultrasound, but it’s not a fully-formed heart — it’s the earliest stage of the heart developing.”

Left-wing Washington Post “fact-checker” Glenn Kessler defended Abrams by claiming “fetal heartbeat” was a “misnomer,” for which he was excoriated on social media:

This is from John Hopkins medicine. He actually did it. https://t.co/mrVweTOsPV pic.twitter.com/zsgnm1W3UI

Hi there, I’m a cardiologist that does cardiac ultrasounds.

I was today years old when I discovered that an ultrasound can pick up electrical activity. https://t.co/LsYlDJBeYX

It is true that the valves in the heart develop later.

However, the cardiac muscles that are located in the embryological heart are contracting. They are in fact moving inward and outward. That is how you define a beat.

Abrams is running again for governor this year, against incumbent Republican Brian Kemp.