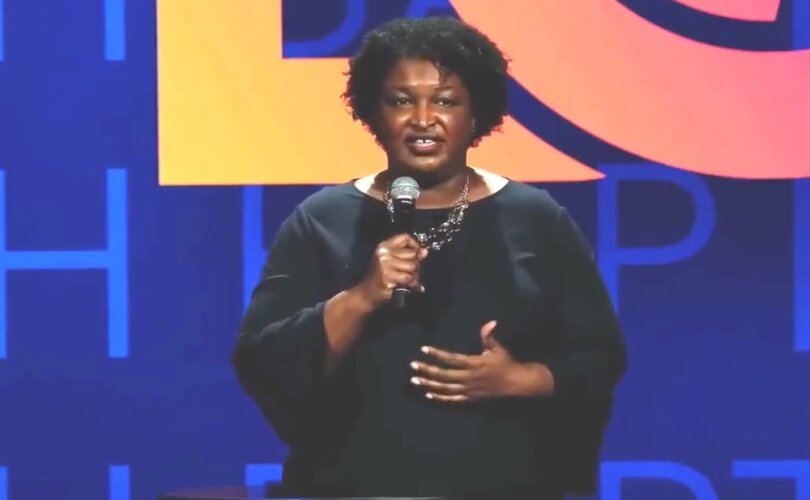 ATLANTA (LifeSiteNews) — Radically pro-abortion Democratic gubernatorial nominee Stacey Abrams evidently believes in the right to kill preborn babies so much she preached about it at a Baptist church last Sunday.

Abrams, who is running for governor in Georgia against incumbent Brian Kemp after losing against him in the 2018 gubernatorial race, said during Elizabeth Baptist Church’s noon service last Sunday that her “tradition of faith” leads her to believe that “I have the right to control my body and control my future, and that that belongs to me alone.”

“And I don’t want to make the choice for anybody else,” she added.

Here’s the wider context. Now her list has expanded from “running in the tradition of Deborah” to “the tradition of Esther and Deborah and Ruth and Mary and Martha” pic.twitter.com/zk9HFmq6sk

Abrams went on to frame herself as an analog to key female figures in the Bible, including Esther, Deborah, Ruth, and Lazarus’ sisters Mary and Martha, and claimed that she and other women must fix what male politicians have allegedly broken in the nation.

“It took men to break this place. It’s going to take a woman to make it right,” Abrams said. However, The Blaze pointed out that “even though only two of the women she listed, Esther and Deborah, ever held a position of leadership, and even Queen Esther remained under the strict control of her husband, King Ahasuerus.”

In addition, Abrams notably refrained from comparing herself to another biblical Mary, whose loving fiat to carrying the preborn infant Jesus Christ in her womb opened the way for salvation.

Meanwhile, despite Abrams’ citation of her “tradition of faith” to underscore her support for abortion, the Democrat candidate hasn’t always defended the legal murder of preborn babies.

Last month, Abrams told MSNBC that she grew up in “a very religious family” who taught her that abortion was wrong. According to Abrams, her views altered after she went to college and met people who espoused Christian beliefs but supported keeping abortion legal.

“Over the course of the next few years, I really started thinking about what role should the legislature play? What role should government play?” she said, characterizing abortion as “health care” and having to do with “woman’s right to control her body.”

“And that, for me, as a matter of faith, means that I don’t impose those value systems on others. More importantly, I protect her rights. I protect her humanity, and that should be my responsibility,” Abrams said.

She didn’t comment on whether she believes she also has an obligation to protect the rights and humanity of babies as well as their mothers.

Abrams had made similar comments in August, suggesting it’s not her “right as a Christian” to pursue legislation protecting the unborn.

“While your faith tradition may tell you that you personally do not want to make that choice, it is not my right as a Christian to impose that value system on someone else,” Abrams said. “Because the value that should overhang everything is the right to make our own decisions, the free will that the God I believe in gave us.”

Pro-abortion politicians like House Speaker Nancy Pelosi and U.S. President Joe Biden, both self-professed Catholics, have similarly argued that their religious beliefs about abortion should not be imposed on others. The argument fails to pass muster in the Catholic Church, however, which has always taught that abortion is a grave evil and cannot be morally defended by lawmakers.

Pope John Paul II affirmed in 2004 that “those who are directly involved in lawmaking bodies have a ‘grave and clear obligation to oppose’ any law that attacks human life. For them, as for every Catholic, it is impossible to promote such laws or to vote for them.”

Meanwhile, Abrams’ sermon supporting abortion came just before she grabbed headlines this week for suggesting that that American families could alleviate their financial difficulties amid soaring inflation by killing their preborn babies.

Responding to an MSNBC contributor’s observation that abortion as a political issue fails to motivate voters as much as issues like inflation and the high cost of living, Abrams argued that “having children is why you’re worried about your price for gas, it’s why you’re concerned about how much food costs.”

“For women, this is not a reductive issue,” she said. “You can’t divorce being forced to carry an unwanted pregnancy from the economic realities of having a child.”

Last month, Abrams also took a shot at pro-life legislation by claiming that six-week fetal heartbeats, which have been used as the foundation for many laws to protect babies after the development of cardiac activity, are artificially “manufactured” so that men can control women.