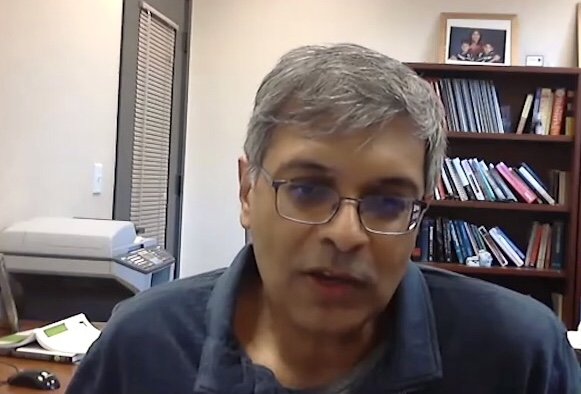 Dr. Jayanta Bhattacharya is a professor of medicine at Stanford University.YouTube screenshot

STANFORD, California, May 18, 2020 (LifeSiteNews) – A Stanford University professor of medicine who just completed an important national study of the coronavirus has concluded that the lockdowns instituted across much of the nation and the world are more dangerous than they are helpful.

“It’s not possible to eradicate (the coronavirus) with a lockdown. We have to come to terms with that,” said Dr. Jayanta Bhattacharya, a professor of medicine at Stanford University, in a video interview with the Hoover Institute’s Peter Robinson.

The lockdown strategy is “doomed to fail,” said Bhattacharya, “and it’s also going to be counterproductive.”

“There is no safe option,” he said. “If you think that having a lockdown will provide you safety, you’re mistaken.”

Bhattacharya explained that vaccines are very hard to develop, adding, “There aren’t any vaccines for coronaviruses.”

“The idea that we could continue the lockdown until a vaccine is developed is preposterous,” suggested Robinson.

“This lockdown has had an enormous negative effect on the health of people in the United States and worldwide,” said Bhattacharya, enumerating some of the lockdown’s tragic unintended but foreseeable consequences. “There have been people who have delayed their chemotherapy as a result of the lockdown.”

“(People) have had heart attacks and not gone to the doctor,” he said.

“I just saw a report estimating that 75,000 will have committed suicide as a result of the lockdown,” he continued. “Seventy-five thousand ‘deaths of despair’ are predicted in the U.S. alone – a number that currently exceeds the total number of deaths due to the coronavirus in this country.”

“Worldwide, there’s been a resurgence of diseases that we thought we had a handle on,” noted Bhattacharya, citing “1.4 million cases of tuberculosis not treated in India” as a result of the lockdowns.

“In a place such as India, you impose a lockdown, and you’re pushing the entire population into a time machine. Their health care regresses a century,” observed Robinson.

Bhattacharya indicated that people are putting too much faith in the lockdowns. The measures are effective while they are enforced, he said, but as soon as they are lifted the virus will “just start growing again.”

“The lockdowns are not a mechanism for disease eradication,” said Bhattacharya.  Lockdowns “will never eradicate a disease.”

Lockdowns “will only delay when the disease happens. Now or later. You pay the cost now or you pay it later,” he said.

“No matter what choice you make,” said Bhattacharya, “you are going to be on the hook.”

Robinson suggested that politicians are making political calculations as they govern, trying to find a way to not get blamed either for deaths to the virus or for misery caused by the economic collapse due to the lockdowns.

“What I’d like to see is actual leadership,” said Bhattacharya.

Asked what he would do if he were the president or a governor, the Stanford medical professor said he would focus on the two groups that are most at risk when they contract the disease: those already sick and the elderly.

“We have to work very hard to protect people when we start lifting lockdowns who fit that description, especially (in) the places where they live,” said Bhattacharya. “The fact that such a large fraction of the deaths have occurred in nursing homes is a clue that that’s where we basically should be taking action to protect people.”

“Quarantining – basically making the nursing homes much safer – is going to be a huge priority as we lift the lockdowns,” he said.

“What you’re saying is that whatever we need to do to protect the people most at risk is going to cost a tiny fraction of what we’ve already spent for this lockdown,” suggested Robinson. “If we’re being sensible, we can do stuff that doesn’t cost much.”

“That’s right.  We need to better understand who actually is at risk,” said Dr. Bhattacharya, “and focus our attention on providing support for those folks.”

Dr. Bhattacharya had just completed a study of more than 5,600 employees of Major League Baseball (MLB) clubs around the nation, including athletes, coaches, and office staff.

The MLB testing involved looking for antibodies that provide evidence of current or past infection. While it examined a “unique population” – MLB employees only – Bhattacharya said it gives “a peek into what the disease is doing all across the country in one go.”

Surprisingly, the study found that just 0.7 percent, or seven people in 1,000 MLB employees and family members, had evidence of having been infected with the virus.

This was much lower than findings of an early study conducted by Bhattacharya in Santa Clara County, California where about 3 percent of the population, or about 30 per thousand, were shown to have been infected with the virus.

This infection rate is also much lower than reports from other local jurisdictions, including Los Angeles County, which had found that 4 percent, or about 40 per thousand residents there have or have had the virus.

Bhattacharya and Robinson noted that this is perhaps because the majority of MLB employees are paid middle and upper-middle class wages and most likely live outside densely populated urban areas. While the MLB employees for New York’s Yankees and Mets drove up the overall infection rate for the study – 5.44 percent and 2.73 percent, respectively – they still showed a far lower infection rate than the general population for that area.

While Bhattacharya attributed the lower infection rate to the fact that the MLB franchises worked hard to implement safe protocols at the outset of the pandemic, he noted that simple economics probably had a lot to do with it.

“There’s a steep socioeconomic status gradient in who has been exposed to this disease,” said Bhattacharya, “meaning that poorer people are much more likely to have had the disease.”

“Poor people get hit harder,” lamented Robinson. “That’s not something we like in America.”

“We’re two months into this lockdown. The economy is down 4 or 5 percent. Fourteen percent of Americans are unemployed. People have had it!” exclaimed Robinson.

Robinson wondered about the rationale for maintaining lockdowns across the country, noting that initially the lockdowns were put in place to make sure the nation’s hospitals would not be overwhelmed caring for COVID-19 patients.

“In the backs of people’s (minds) is this idea that somehow we can eradicate the disease if we just stay locked down,” said Dr. Bhattacharya. “That is not possible.”