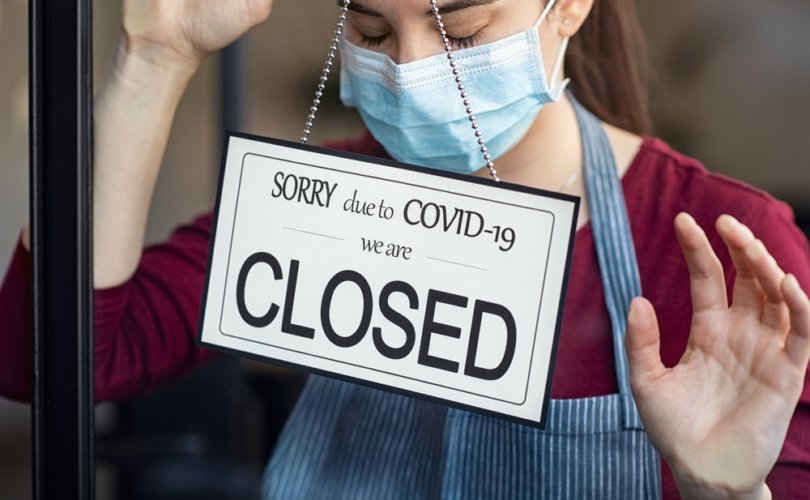 STANFORD, California, January 14, 2021 (LifeSiteNews) – A new study compiled by experts from Stanford University, has found that severe lockdown restrictions, such as stay at home orders and closure of businesses, have no “clear, significant benefits” in preventing the spread of COVID-19, and may in fact increase infection rates.

National or state-wide lockdowns have been the ‘go to’ tactic by governments since the emergence of COVID-19, yet new research reveals that such drastic and draconian measures are, at best, not effective.

Entitled, “Assessing mandatory stay-at-home and business closure effects upon the spread of COVID-19,” the paper was released on January 5 this year, by Dr. Eran Bendavid and Professor John Ioannidis, along with Christopher Oh and Dr. Jay Battacharya, one of the three authors of the Great Barrington Declaration. All four are based in various departments in Stanford University, including the Department of Medicine, the Center for Health Policy and the Center for Primary Care and Outcomes Research, and the Department of Epidemiology and Population Health.

Lockdowns, stay at home orders, and business closures, were all designated as “some of the most restrictive NPI policies,” in the paper.

No evidence of lockdown efficacy ‘in any country’

Based upon results drawn from countries where very restrictive NPIs were used, compared to countries with only light restrictions, the study found “no clear, significant beneficial effect of mrNPIs on case growth in any country.”

As to whether the spring lockdowns of 2020, i.e. mrNPIs, brought infection rates down, the study wrote: “there is no evidence that more restrictive non-pharmaceutical interventions (“lockdowns”) contributed substantially to bending the curve of new cases in England, France, Germany, Iran, Italy, the Netherlands, Spain, or the United States in early 2020.” The authors admitted that whilst “modest decreases in daily growth” could not be “excluded in a few countries, the possibility of large decreases in daily growth due to mrNPIs is incompatible with the accumulated data.”

Those eight countries which employed restrictive NPI’s (USA, England, France, Germany, Italy, Iran, Netherlands, Spain), were each compared to the less restricted countries of Sweden and South Korea, and the authors noted that “[u]nder no comparison is there evidence of reduction in case growth rates from mrNPIs, in any country.”

In 12 out of 16 comparisons, the opposite was in fact true, with “mrNPIs resulting in increased daily growth in cases.” “It is possible,” the authors stated, “that stay-at-home orders may facilitate transmission if they increase person-to-person contact where transmission is efficient such as closed spaces.”

The evidence presented, demonstrated that mrNPIs such as lockdowns, were not even necessary, since “reductions in social activities that led to reduction in case growth were happening prior to implementation of mrNPIs because populations in affected countries were internalizing the impact of the pandemic in China, Italy, and New York, and noting a growing set of recommendations to reduce social contacts, all of which happened before mrNPIs.”

The authors took the time to note the failings by a prominent, and much quoted study released in June last year, which claimed that mrNPIs and particularly lockdowns, “had a large effect on reducing transmission.” Bendavid and Ioannidis observed that in the June study, which used disease modelling, effects of lockdown on transmission, were “assumed rather than assessed.”

In fact, the June study had falsely attributed “nearly all the reduction in transmission to the last intervention, whichever intervention happened to be last.”

Bendavid and Ioannidis have been corroborated, almost certainly unwittingly, by the secretive U.K. government Scientific Advisory Group for Emergencies (SAGE). Back in September 2020, a document from SAGE, called for another national lockdown and closure of businesses, yet made a revealing admission in the text, stating that “[t]he evidence base into the effectiveness and harms of these interventions is generally weak.”

Despite being strongly pro-lockdown, SAGE admitted that the NPIs it called for, would have “a relatively minor effect at the population level.” The group added that “[t]here may well be synergistic (or even antagonistic) effects resulting from adopting multiple interventions,” and that “beneficial impacts on health” would be only “modest.”

Aside from the lack of benefit gained from more restrictive NPIs, Bendavid and Ioannidis warned of the great harm which could arise from them, distinct from the increase in infections as previously mentioned. “NPIs can also have harms, besides any questionable benefits,” and some harms may be “more prominent for some NPIs than for others.”

The paper highlighted the effect which school closures would have upon children in the U.S, estimating the harm at “an equivalent 5.5 million life years for children in the US during the spring school closures alone.” Such a figure is in addition to an estimated “168,000 additional child deaths” which a different study predicted could occur in poorer countries by 2022.

A number of other significant, detrimental effects of mrNPIs were mentioned by Bendavid and Ioannidis, including “hunger, opioid-related overdoses, missed vaccinations, increase in non-COVID diseases from missed health services, domestic abuse, mental health and suicidality, as well as a host of economic consequences with health implications.”

Another aspect of importance was data showing that deaths in care homes were more numerous whilst “under mrNPIs rather than under less restrictive measures.” Such figures “further suggest that restrictive measures do not clearly achieve protection of vulnerable populations.” Indeed, the study pointed to additional evidence, to suggest that when under mrMPIs, “infections may be more frequent in settings where vulnerable populations reside relative to the general population.”

Lockdown ‘harms’ could outweigh any ‘benefits’

The evidence presented in this new study is not without precedent, as even 2019 advice from the World Health Organisation (WHO), counselled against the more restrictive NPIs of business and border closures. Concerning closing businesses to prevent the spread of influenza-like viruses, the WHO wrote: “There is a very low overall quality of evidence that workplace measures and closures reduce influenza transmission.”

Meanwhile border closures, along with contact tracing and “quarantine of exposed individuals” were all “not recommended under any circumstances” in a “pandemic.”

The final conclusions presented in Bendavid’s and Ioannidis’s study are worth reproducing in full here:

In summary, we fail to find strong evidence supporting a role for more restrictive NPIs in the control of COVID in early 2020. We do not question the role of all public health interventions, or of coordinated communications about the epidemic, but we fail to find an additional benefit of stay-at-home orders and business closures.

The data cannot fully exclude the possibility of some benefits. However, even if they exist, these benefits may not match the numerous harms of these aggressive measures. More targeted public health interventions that more effectively reduce transmissions may be important for future epidemic control without the harms of highly restrictive measures.