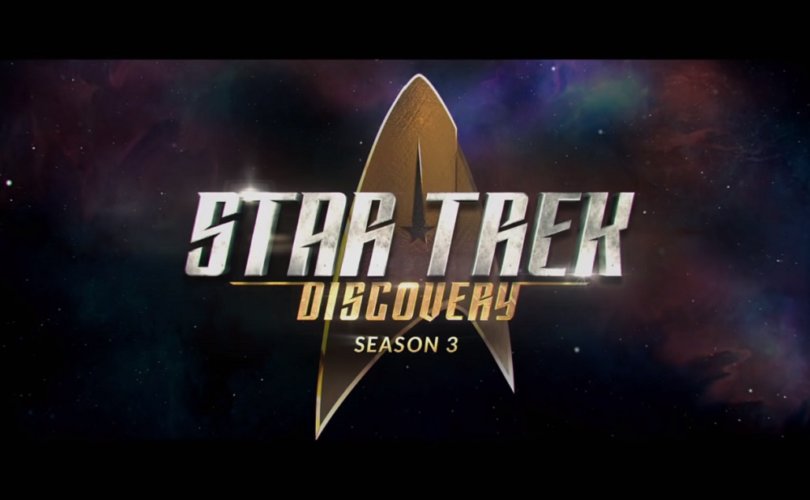 September 4, 2020 (LifeSiteNews) — The latest iteration of the legendary Star Trek franchise has announced it will be adding both a transgender and a “non-binary” character in the upcoming season.

The introduction of the sexually lost-in-space roles was engineered at the urging of GLAAD, the New York– and Los Angeles–based LGBT media monitoring group.

Over the last 30 years, GLAAD has successfully pushed for ever-increasing positive gay, lesbian, and transgender representation in the television and motion picture industries.  The organization recently conquered the formerly family-friendly Hallmark Channel, which is now “‘open’ to doing any type of movie — including with gay leads.”

In the upcoming third season of the CBS All Access show, fans will meet the Star Trekuniverse’s first non-binary character: Adira, played by newcomer Blu del Barrio. The character is described as “highly intelligent with a confidence and self-assurance well beyond their years.” They will find a new home on the U.S.S. Discovery and “form an unexpected bond with Lt. Commander Paul Stamets (Anthony Rapp) and Dr. Hugh Culber (Wilson Cruz).”

The transgender character is Gray, played by Ian Alexander (The OA). Gray is described as “empathetic, warm, and eager to fulfill his lifelong dream of being a Trill host, but he will have to adapt when his life takes an unexpected turn.”

LGBT indoctrination is the goal

The actress who plays the “non-binary” character clearly feels as though she’s on an urgent mission to indoctrinate the public in her new role.

“Our education system in the U.S. is severely lacking LGBTQ+ subject matters in the curriculum, as well as resources for LGBTQ+ youth,” del Barrio said in a GLAAD interview.

“This is not something we can put on a to-do list. It requires immediate action,” del Barrio insisted. “I honestly believe if schools were legally required to include LGBTQ+ curriculum, we would see a huge change in how our country treats trans people.”

“The characters alone would be an obnoxious liberal move, but the addition of GLAAD’s involvement makes it worse,” wrote Newsbusters’ Lindsay Kornick.

“For years, GLAAD has worked as the judge and jury of all things LGBT and beyond,” Kornick continued. “Obnoxious leftist entertainment pieces are rewarded while anything less than 20% in TV representation is considered a loss. And the group has only gotten worse in demanding extensive representation for less than 4% of the country’s population. Of course, left-leaning Hollywood has no choice but to agree.”

“Prepare for the show ‘to boldly go’ even more to the left,” warned Kornick.

Star Trek: Discovery has had “Beam me up, Scotty” firsts. In 2017, the series featured the first openly gay couple in a same-sex “marriage” in the franchise’s history: Lieutenant Stamets, played by Anthony Rapp, and Dr. Hugh Culbert, played by Wilson Cruz.

The sci-fi franchise has tackled issues around sexual diversity before, most pointedly in the Star Trek: The Next Generation episode called “The Outcast” (1992). The “outcast” of the title is the member of an androgynous species who confesses both to a female identity and to sexual feelings for First Officer William Riker. When the affair is discovered, Soren is put on trial and made to undergo conversion therapy. As the therapy returned Soren to her society’s sexless androgyny, gay activists were mixed in their responses to the show.

Following the well publicized homosexuality of actor George Takei, the original Mr. Sulu in the parent Star Trek series, Sulu was depicted in the film Star Trek Beyond (2016) as having a legal male partner.

“Star Trek has always made a mission of giving visibility to underrepresented communities because it believes in showing people that a future without division on the basis of race, gender, gender identity or sexual orientation is entirely within our reach,” said Michelle Paradise, co-showrunner and executive producer. “We take pride in working closely with Blu del Barrio, Ian Alexander and Nick Adams at GLAAD to create the extraordinary characters of Adira and Gray, and bring their stories to life with empathy, understanding, empowerment and joy.”