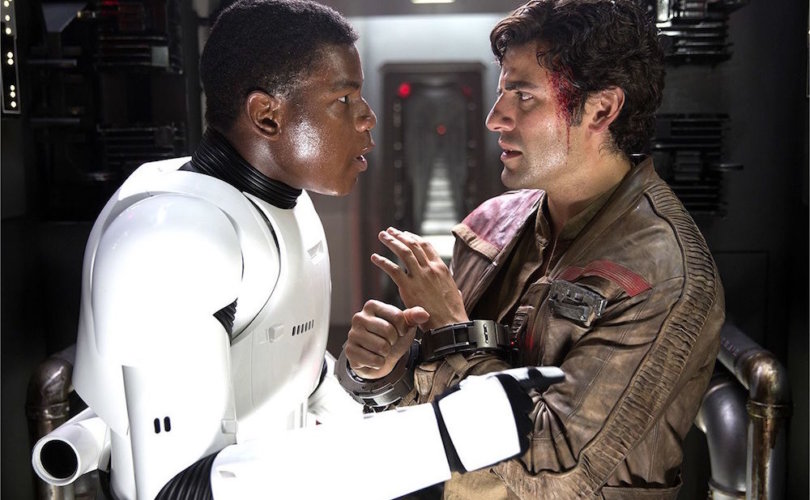 December 6, 2019 (LifeSiteNews) — The long awaited final chapter in the Star Wars saga finally opens in just under two weeks, but whether LGBT “representation” will distract from the space-fantasy action remains an open question.

When Star Wars Episode VII: The Force Awakens opened in 2015, many took notice of the chemistry between actors John Boyega (Finn) and Oscar Isaac (Poe Dameron). The film did not present them as anything other than platonic comrades who bonded during war, but a chorus quickly emerged from certain corners of the internet interpreting the pair as a homosexual couple and demanding that a romance be made official in sequels.

The actors expressed openness to the concept, but such a thread was not developed in 2017’s Episode VIII: The Last Jedi, and recent comments from the actors as well as director JJ Abrams indicate it won’t appear in Episode IX: The Rise of Skywalker, either.

“They’ve always had a quite loving and open relationship in which it wouldn’t be too weird if it went beyond it” but “are just platonic at the moment,” Boyega said this week, Variety reports. Isaac expressed disappointment that Finn and Poe won’t get romantic, lamenting that “it’s a time when people are too afraid, I think, of…I don’t know what.”

But Abrams also teased that “in the case of the LGBTQ community, it was important to me that people who go to see this movie feel that they’re being represented in the film.” He wouldn’t give away whether Episode IX will see another character stated to be or depicted as LGBT in some way, but he quipped that “I did just say what I just said.”

The multimedia juggernaut Star Wars franchise, which Disney bought from creator George Lucas in 2012, has previously had a few homosexual characters in books aimed at older audiences, but it turned a corner recently when the producers of the Dixney XD animated series Star Wars Resistance confirmed that a pair of its alien characters are a gay couple (something hinted at in the show itself but not overtly stated).

None of the above is adequate for certain left-wing voices. At the science fiction blog io9 (formerly affiliated with the far-left Gawker media network), James Whitbrook complained that “Star Wars Movies Should Be So Far Beyond Teasing LGBTQ Representation at This Point” and said Abrams was “asking for a level of trust in this specific matter that the Star Wars movie franchise has yet to prove it has earned,” as if LGBT advocates are entitled to see LGBT characters in specific films.

On a related note, returning Star Wars actor Billy Dee Williams (Lando Calrissian) briefly caused a stir when he said in an interview that he sees himself as a “relatively colorful character who doesn’t take himself or herself too seriously” and “as feminine as well as masculine.” Scores of headlines quickly ran with the idea that Williams had come out as “gender fluid,” which the 82-year-old actor quickly shut down.

“Well, first of all, I asked last night. I said, ‘What the hell is gender fluid?’ That’s a whole new term,” Williams responded in another interview. “But what I was talking about was about men getting in touch with their softer side of themselves…I wasn’t talking about sex, I wasn’t talking about being gay or straight. People should read [psychiatrist Carl Jung]. I mean, it would be an interesting education for a lot of people.”