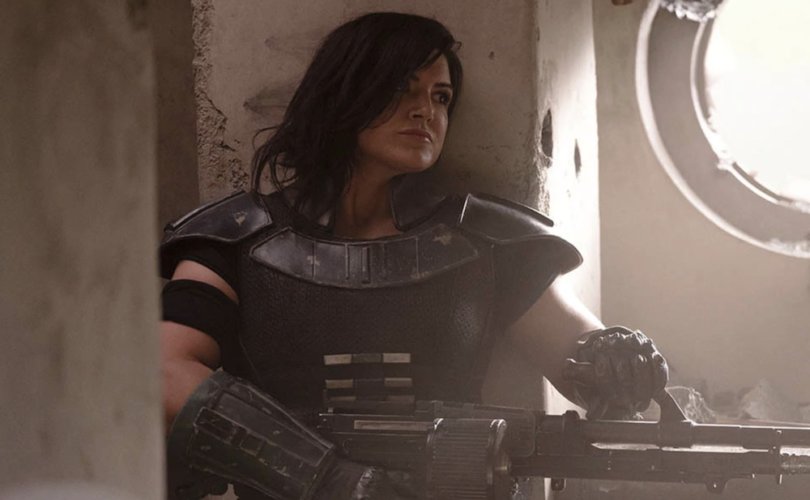 September 17, 2020 (LifeSiteNews) – While the divisive final chapter of the Star Wars film saga may have appeased LGBT activists with a same-sex kiss, one of the stars of the franchise’s popular streaming series The Mandalorian has no intention of surrendering to such demands.

For weeks, actress and MMA fighter Gina Carano (who portrays mercenary Cara Dune on the Disney Plus series) has been subjected to demands to add her “preferred pronouns” to her Twitter bio, a gesture of solidarity with “transgender” individuals. Pro-trans trolls  have responded to her refusal to do so with a torrent of insults, obscenities, and calls for Disney to fire her:

The pronoun bullying campaign was started by the SAME group that harassed Gina to “Say BLM/ACAB.”

These “Pedro Pascal Stans” got him to put pronouns in his bio & have bullied Gina ever since.

“You’re just transphobic trash you dumb pos,” one tweeter said. “Hollywood should blacklist her,” another declared. Others tweeted to Walt Disney Company executive chairman Bob Iger and the official Disney and Star Wars social media accounts to demand she be removed from the show.

But Carano has refused, going so far as to mock the demands by temporarily adding “beep/bop/boop” to her bio instead.

Beep/bop/boop has zero to do with mocking trans people ��& �� to do with exposing the bullying mentality of the mob that has taken over the voices of many genuine causes.

I want people to know you can take hate with a smile. So BOOP you for misunderstanding. �� #AllLoveNoHate pic.twitter.com/Qe48AiZyOL

It’s ok. You deleted it. But I saved it. I’ll block out your handle because I don’t encourage bullying. See how that works. pic.twitter.com/6hpODBTYKW

“I’m not against trans lives at all. They need to find less abusive representation,” Carano wrote in other tweets. “I don’t think trans people would like all of you trying to force a woman to put something in her bio through harassment & name calling EVERYDAY for MONTHS. Such as ‘Racist ’Transphobe’ ‘Bitch’ ‘weirdo’ ‘I hope you die’ ‘I hope you lose your career’ ‘your fat, you’re ugly’.”

This is not the only issue on which Carano has dissented from Hollywood’s left-wing orthodoxy. This week she also retweeted the following video highlighting the actions of Black Lives Matter activists in Los Angeles:

Black Lives Matter activists confront law enforcement at Los Angeles hospital where wounded officers were taken after they were shot.

“To their family: I hope they f**king die.”
pic.twitter.com/bPgatQZYRI

The Mandalorian, which follows the adventures of bounty hunter Din Djarin (Pedro Pascal) as he protects a mysterious baby until he can return him to his people, is perceived by many to represent a divide within Lucasfilm that has developed since Disney acquired the company, hearkening back to Star Wars’ escapist roots as opposed to the perceived infusion of “social justice” elements into the franchise’s films and books.