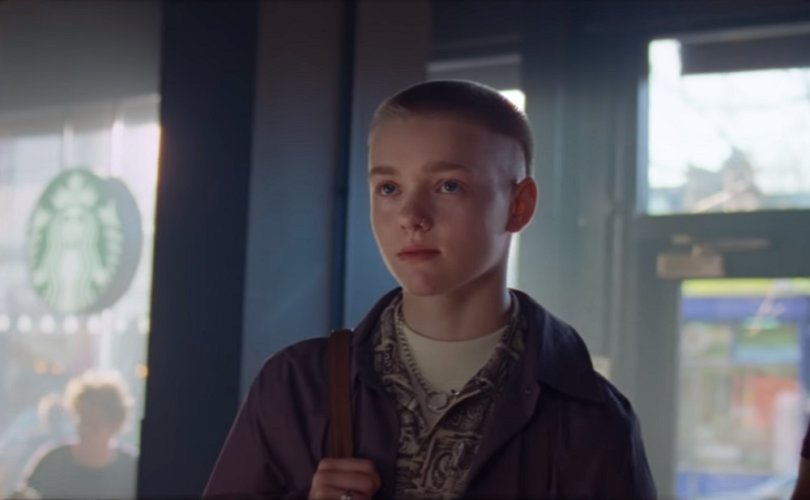 LONDON, February 4, 2020 (LifeSiteNews) ― Starbucks has thrown its support behind the transgender cause in the U.K. with a prize-winning advertisement and fundraising cookies.

Starbucks U.K. has released an advertisement showing a short-haired young woman telling a server at a coffee shop that her name is James after various vignettes in which she is addressed as “Jemma.” The sales pitch ends with Jemma striding past the Starbucks window with her coffee and the captions “Every name’s a story” and “#whatsyourname.” The latter is a reference to Starbucks’s Twitter campaign in support of transgender philosophy.

Commenting on its ad, the coffee giant said, “At Starbucks, writing your name on a cup and calling it out is a symbol of our warm welcome. It’s a small gesture, but it's symbolic of what we believe in: recognition and acceptance, whoever you are, or want to be. We welcome everyone.”

The advertisement won the “Diversity in Advertising Award” sponsored by Britain’s most popular television station, Channel 4.

Starbucks is also selling cookies shaped like a mermaid’s tail to raise £100,000 for a U.K. transgender advocacy group called “Mermaids.” Founded in Leeds in 1995, Mermaids controversially advocates for minor children to be given easier access to puberty-blockers, cross-sex hormones, and such body-altering surgeries as mastectomies and castration. In the U.K., irreversible gender-related surgery is available only to those who are aged 18 and over.

CitizenGO campaign director for the U.K. and Ireland Caroline Farrow told LifeSiteNews that Starbucks’s endorsement of Mermaids was “disappointing.”

“It is extremely disappointing to see Starbucks endorse a lobby group which advocates for the medicalisation of healthy children,” Farrow said via social media.

“No responsible corporation ought to be endorsing what amounts to a wholesale experimentation on children and providing funds for  this organisation to promote their harmful totalitarian and intolerant ideology within schools and other public institutions,” she continued.

Farrow believes that the coffee chain has misunderstood the interests of its U.K. market.

“Starbucks need to realise that ‘woke culture’ is falling very much out of favour with the British public and the timing of their promotion coincides with both a number of legal challenges involving their ideology and also comes on the same day as the NHS has announced a comprehensive review  into the use of puberty blockers and hormones for children,” she said.

Last month, Keira Bell, 23, a “detransitioning” former patient of the NHS’s “gender identity development service,” joined psychiatric nurse Sue Evans and a gender-confused girl’s mother, known only as Mrs. A, in demanding a judicial review of the NHS’s policies regarding the dosing of minors with puberty-blockers and cross-sex hormones.

On January 30, the NHS said an independent group of experts and members of the public would examine the Tavistock and Portman NHS Foundation’s policies related to hormone treatments for children.

Farrow stated that the British public is already impatient with Starbucks’s corporate policies in Britain, and this will add to public dismay.

“Starbucks has drawn much criticism in the UK for their policy of tax avoidance and the public will be dismayed to see this latest display of corporate irresponsibility,” she said.

The mother of five also believes that the fundraising biscuit fails to reflect the reality of what Starbucks is now supporting.

“Rather than a fishtail, a far more accurate representation of Mermaids ideology would be a gingerbread cookie featuring a number of scars and wounds,” Farrow said.

The founder of Mermaids, Susie Green, took her 15-year-old son to Thailand for radical genital surgery, which involved the creation of an artificial vagina. On his sixteenth birthday, Jack “Jackie” Green became Britain’s youngest so-called “male-to-female” transsexual. At the time, Thailand was still performing such surgeries on boys as young as 11, but that nation has since passed a law forbidding castration of boys until they are 18.

On its web page for the parents of gender-confused children, Mermaids suggests that lack of support for their desire to transition may cause them to self-harm. “Unfortunately, many of the teens we have interacted with over the last 25 years have struggled with depression, isolation and even self-harm and suicidal feelings. Giving them the support they need is vital if they’re to achieve their potential,” the page reads.

“It’s important to note that, while most kids and young people we support identify as transgender, an increasing number of them are identifying as non-binary, which means they don’t identify exclusively as male or female,” it continues.

“Our approach is to help families face the challenges ahead, confident that they are understood, and never alone.”

But Mermaids neglects to mention studies that show that 80% of children who are unhappy with their sex are reconciled to it after puberty. According to Transgender Trend, a Dutch study published as late as 2013 confirmed “that gender dysphoria does not persist in most children past puberty.”

“In this Dutch study they identified 127 children who were referred to the Gender Identity clinic in Amsterdam when they were under the age of 12,” the children’s advocates wrote.

“They then looked to see if these children were still gender dysphoric by the time they reached adolescence at age 15. 47 (37%) of these children had persisted. However 80 (64%) of children had either desisted (52) or were no longer traceable (28).  Since there is only one Gender Identity clinic for children in Holland it can be assumed that the latter no longer required support and so had also desisted.”

Starbucks also matches employee donations to abortion business Planned Parenthood and advocates for same-sex “marriage” and the LGBT cause in the United States.

Kevin Johnson
CEO, President and Chairman of the Board