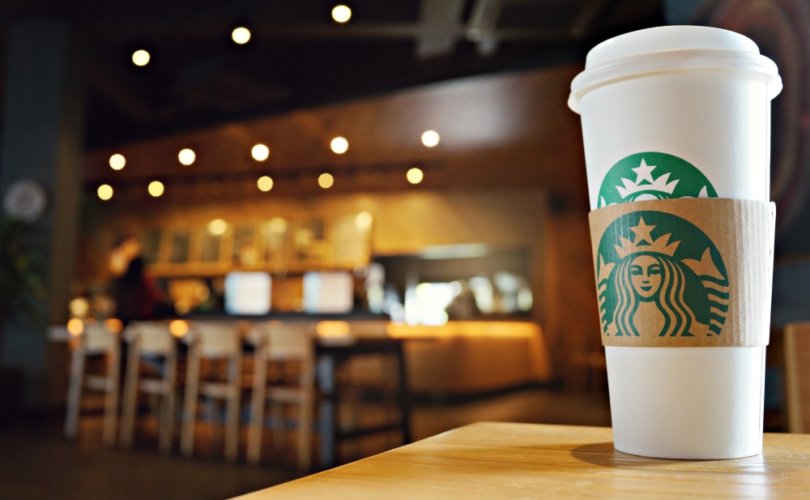 SEATTLE (LifeSiteNews) — Long recognized as a left-wing corporation, Starbucks has upped its political game by promising to bankroll abortion and radical transgenderism.

On Monday, the Seattle-based coffeehouse chain became one of the latest major corporations to announce that it will pay for abortion and transgender surgery-related travel expenses for its employees, UPI reported.

Employees and their dependents will receive financial backing from Starbucks to travel for abortion or ‘gender-affirming’ surgeries as part of the corporation’s benefits package. The policy will kick in for any of the company’s 240,000 employees who would need to travel 100 miles or more to obtain an abortion or “gender-affirming” surgical procedure.

I’m out. Thanks for the years of coffee but I can’t support this.
⁦@Starbucks⁩

RELATED: Christian woman sues Starbucks for firing her after she refused to wear pro-LGBT shirt

— Article continues below Petition —
PETITION: Call on Biden to condemn violent pro-abortion rioters across America!
Show Petition Text
20968 have signed the petition.
Let's get to 22500!
Thank you for signing this petition!
Add your signature:
Show Petition Text

In a letter announcing the new policy, Starbucks acting executive vice president of partner resources Sara Kelly specifically highlighted the company’s commitment to ensuring that all employees can kill their unborn babies even if the legality of abortion in the U.S. is decided by individual states rather than the federal government.

“Regardless of what the Supreme Court ends up deciding, we will always ensure our partners have access to quality health care,” Kelly said in the letter, Newsweek reported.

According to the leaked document, at least a 5-4 majority on the Court is poised to rule in favor of Mississippi by overturning Roe v. Wade, the 1973 decision that established a “constitutional right to abortion” throughout all 50 states.

A decision is expected in the Dobbs case any day.

Meanwhile, Starbucks isn’t alone in moving to finance abortions in defiance of pro-life legislation and the potential overturning of Roe v. Wade.

A raft of pro-abortion companies, including Amazon, Apple, Citibank, Salesforce, Tesla, Microsoft, and Yelp, have also announced they will cover travel expenses for pregnant women to kill their babies.

Yelp chief diversity officer Miriam Warren explained her company’s decision by arguing that “[t]he ability to control your reproductive health, and whether or when you want to extend your family, is absolutely fundamental to being able to be successful in the workplace.”

Meanwhile, Republican-led states like Alabama, Arizona, Texas, Idaho, Florida, Oklahoma, and South Dakota have kicked into overdrive to forward a bevy of laws and executive orders to protect unborn babies and restrict destructive surgeries or drugs designed to make people look more like the opposite gender.