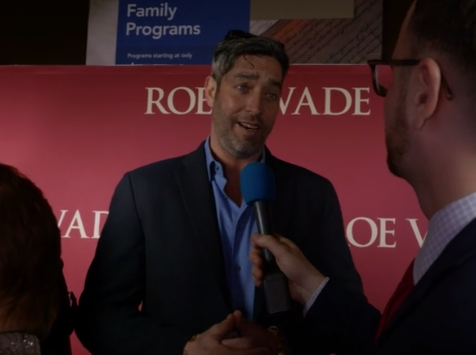 Director Nick Loeb on the red carpet at CPAC 2021.

ORLANDO, FLORIDA, March 3, 2021 (LifeSiteNews) — Actors and others associated with the brand new film Roe v. Wade walked the red carpet at CPAC this past weekend. The movie, which will be released in April, made its world premiere last Friday after spending several years in production.

Nick Loeb, the film’s co-director and co-writer, stars as Dr. Bernard Nathanson, a notorious abortionist who later converted to Catholicism. Loeb told LifeSite he hopes people will walk away from the movie with a new perspective.

“My goal really is to have a movie that changes hearts and minds that may not fall in line with the same ideas that I do … I think people are not going to believe what they see.”

Loeb encouraged people to check out https://www.roevwademovie.com/factcheck so they can see for themselves that he and his team drew from historical events.

Others in the film spoke to LifeSite as well. Robert Davi, a veteran Hollywood actor who’s appeared in films such as The Goonies, Die Hard, and the James Bond movie A License to Kill, plays Supreme Court Justice William Brennan. Brennan ruled in favor of abortion in the Roe case.

Davi is Catholic and often calls out Hollywood’s liberal elite on twitter. He explained to LifeSite that abortion in the United States is out of control.

“I’ve got eight kids. Two step-children. And I’ve got a baby girl a year and nine months. I’m pro-life. I understand that abortion is a very complex, hot-button [issue] for a lot of people. What’s confusing to me [is] how do you justify 60 million lives?”

“I can understand extenuating circumstances, but it seems to me — and we know Margaret Sanger — where it all started from, and why it started, to clean out minorities … the left does not let that message out there.”

Actress and political commentator Mindy Robinson played Ellen Cullen McCormack in the film. McCormack was a regular housewife who decided to run for president in 1976 on the pro-life platform. She was the first female candidate to receive federal money and appeared on multiple state ballots.

“Politicians wouldn’t say whether they were pro-life or pro-abortion [at the time]. It was too messy. She kind of forced the question and ever since then people have had to do that,” Robinson explained.

“They cannot overturn Roe v. Wade and force vaccinations on us. It’s one or the other,” she added. “I’m not taking the vaccine. It has not been tested. And I have a right to privacy that they’re going to have to overturn.”

Robinson, who is running for Congress in 2022 for the Patriot Party in Nevada, additionally remarked, “we should’ve looked at abortion from the point of when do we become citizens in the womb protected under the Constitution. And that didn’t happen.”

Kevin and Sam Sorbo also appeared on the red carpet, though neither appeared in the film. Both expressed their full support for it and hoped viewers would be motivated to do something for the unborn. The pair released a pro-life documentary titled “Leaders for Life” in 2020.

The Sorbos are a household name for many Christian Americans. Kevin is known for having played Hercules in the 1990s and in recent years has released several faith-based movies, including God’s Not Dead and God’s Not Dead 2. His wife Sam is a pro-life and homeschool advocate, among other things. She recently wrote a book titled Words for Warriors: Fight Back Against Crazy Socialists and the Toxic Liberal Left.

Father Frank Pavone of Priests for Life spoke to LifeSite too, as did Angela Stanton-King. Pavone and King’s godmother, Dr. Alveda King, had advisory roles on Roe v. Wade, with King being an executive producer.

Troy Duhan, an executive producer of the film, told LifeSite he believes God selected Loeb to direct Roe v. Wade. Duhan walked the red carpet alongside Nick Vujicic and his wife Kanae. Vujicic, an Australian-American Christian evangelist, was born without arms or legs but has made hundreds of public appearances on television and in the media. He runs a ministry called Life Without Limbs.

Fox News commentator Tomi Lahren was at the red carpet event as well. Lahren makes a cameo in the film as the pro-abortion daughter of Supreme Court Justice Harry Blackman. Lahren has previously said that overturning Roe v. Wade would be “a mistake.”

LifeSite planned to ask Lahren several questions about those remarks but was unable to do so as she walked down the carpet at what seemed to be a hurried pace while LifeSite’s Stephen Kokx was occupied interviewing Kevin Sorbo. Lahren introduced the film inside the CPAC ballroom where she praised “freedom-loving” conservatives for coming together to watch this “important” movie.