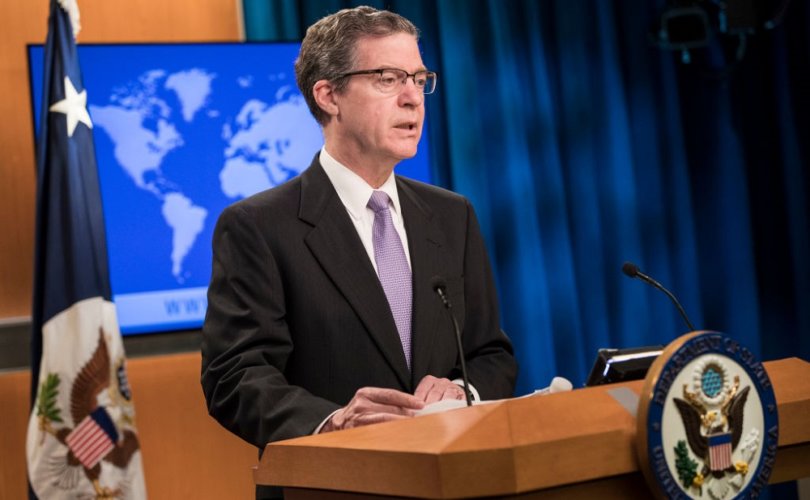 According to Pompeo, “[i]n China, state-sponsored repression against all religions continues to intensify. The Chinese Communist Party is now ordering religious organizations to obey CCP leadership and infuse communist dogma into their teachings and practice of their faith.”

“There is now equivalence between our two forms of government. We have the rule of law. China does not. We have free speech and embrace peaceful protest. They don’t. We defend religious freedom, as I just noted. China continues its decades-long war on faith,” he continued.

“The contrast couldn’t be more clear. During the best of times, China ruthlessly imposes communism. And amidst the most difficult challenges the United States faces, we worked to secure freedom for all.”

Brownback, a former governor of Kansas, said, “Maybe it sounds like a broken record, but China is just such a big player in this space in such a negative way that it’s hard to overlook.”

The International Religious Freedom Report is released annually to describe “the status of religious freedom in every country. The report covers government policies violating religious belief and practices of groups, religious denominations and individuals, and U.S. policies to promote religious freedom around the world.”

China alone takes up 115 pages. As the report points out, the Chinese constitution guarantees “freedom of religious belief but limits protections for religious practice to ‘normal religious activities’ and does not define ‘normal.’”

The report’s section on China lists countless examples of Catholics and other Christians being attacked for their faith by the government.

Father Paul Zhang, for example, was taken into custody after he “had refused to join the government-run [Chinese Patriotic Catholic Association]. According to AsiaNews, authorities stopped Zhang’s car, smashed the window, and beat him before taking him away. Another man in the car was also beaten but not taken into custody. Fifteen days prior to this event, police had raided a house in which Zhang was leading Mass. His whereabouts were unknown at year’s end.

Pompeo’s remark that the Chinese Communist Party is ordering religious organizations to “infuse communist dogma into their teachings and practice of their faith” was explained in more detail by the report:

UCA News reported that on December 30, the government approved the Administrative Measures for Religious Groups, scheduled to take effect on February 1, 2020. These measures comprise six chapters and 41 articles dealing with the organization, function, offices, supervision, projects, and economic administration of communities and groups at the national and local levels. The measures emphasize that only registered groups could operate legally and stipulate that religious organizations must adhere to the leadership of the CCP and implement the values of socialism. According to UCA News, if enforced, article 34, which governs money and finances, “will halt the activities of house churches, dissident Catholic communities, and other unregistered religious bodies.”

Additionally, last July, “the Central Institute of Socialism in Fujian Province organized a course on the work of the Catholic Church in the province.”

Several dozen priests who are members of the state-run imitation of the Catholic Church participated. “The lessons and activities centered on the theme of ‘guiding the Catholic Church to follow a path conforming to socialist society.’ AsiaNews noted the course seemed to focus almost entirely on political doctrine with very little mention of Christian teachings.”

The report also mentioned Cardinal Joseph Zen, the former bishop of Hong Kong, and his criticism of the secret deal between the Vatican and the communist Chinese government.

“Similar to the previous year, neither side provided details of the provisional agreement, such as how the Holy See and the government would make decisions regarding appointment of bishops,” the report pointed out.

Paradoxically, Chinese bishop Vincenzo Guo Xijin, “an underground bishop recognized by the Holy See, remained in a subordinate position under Bishop Zhan Silu, who was originally ordained without Holy See approval. The Holy See had previously excommunicated Zhan, a member of the Chinese People’s Political Consultative Conference, but in December 2018 allowed him to replace Guo as bishop of the Mindong Diocese in Fujian Province.”

“Zhan was one of the seven individuals whom the Holy See recognized as bishops under the 2018 provisional agreement,” the report added. “Police had detained Guo, who had been appointed by the Holy See, earlier in 2018 for his refusal to jointly lead Easter services with Zhan, who at the time was not recognized by the Holy See.”

Nigeria is another hotspot when it comes to the persecution of Christians. “According to a report released by the U.K.-based Humanitarian Aid Relief Trust (HART), ‘Fulani militia’ killed over 1,000 Christians throughout the year.”

Even countries that by all accounts can be qualified as civilized democracies of the Western world are featured in the comprehensive 2019 Report on International Religious Freedom.

Germany, for instance, was called out for its absolute ban on homeschooling.

“In January the European Court of Human Rights (ECHR) ruled German authorities at the local level did not violate a Christian family’s human rights when they placed the family’s children in foster care for three weeks in 2013,” the report explained.

“The family from Darmstadt had argued German authorities were in breach of Article 8 of the European Convention on Human Rights when they refused to allow them to homeschool their four children through a Christian distance-learning program.”

However, according to the ECHR, “authorities were justified in removing the children from their home, and it was reasonable to assume the parents were endangering their children by not sending them to school because the children were isolated and had no contact with anyone outside the family.”

Earlier this year, the U.S. Commission on International Religious Freedom also released its annual report on religious persecution around the world.