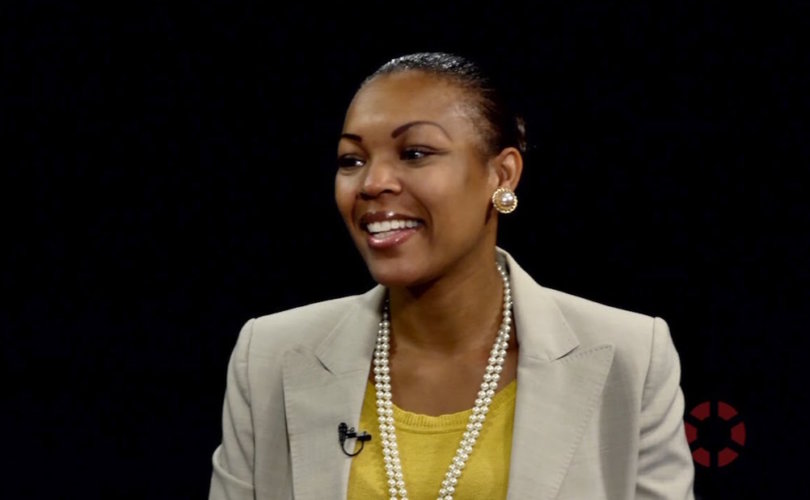 ATLANTA, May 31, 2016 (LifeSiteNews) – The African-American woman who leads a state chapter of the ACLU has resigned, citing her own daughters' “frightened” reaction to biological males using the women's restroom.

The organization's increasing focus on legislating the transgender lobby's concerns pushed Maya Dillard Smith, interim director of the Georgia chapter of the American Civil Liberties Union, to tender her resignation.

“I have shared my personal experience of having taken my elementary school age daughters into a women’s restroom when shortly after three transgender young adults, over six feet [tall] with deep voices, entered,” she wrote.

“My children were visibly frightened, concerned about their safety and left asking lots of questions for which I, like many parents, was ill-prepared to answer,” she continued.

In a statement, she said that the ACLU has become “a special interest organization that promotes not all, but certain progressive rights.”

The “hierarchy of rights” the ACLU chooses to defend or ignore, she wrote, is “based on who is funding the organization’s lobbying activities.” She did not elaborate on the group's funding.

Dillard Smith is no conservative. She earned a degree in economics from Berkeley and a masters degree at Harvard, while working for the Ninth Circuit Court of Appeals and the California Supreme Court.

She is a 2003 graduate of the program Emerge America, which states its “goal is clear: to increase the number of Democratic women in public office.”

But this self-described “progressive” who called herself “unapologetically black” cannot go along with the ACLU's transgender legal agenda.

Georgia was one of first 11 states suing the Obama administration over its controversial federal guidance requiring public schools and universities to allow transgender students to use the restrooms, showers, and overnight accommodations of the opposite biological sex.

The ACLU's North Carolina chapter is suing Gov. Pat McCrory for signing H.B. 2, which requires individuals use the restroom of the biological sex noted on their birth certificates in the lawsuit Carcano v. McCrory.

RELATED: Sexual predator jailed after claiming to be ‘transgender’ to assault women in shelter

The liberal legal group's opposition to the bill – which otherwise leaves restroom policies up to business owners – proved the ACLU holds a legal philosophy Dillard Smith says she can no longer support.

“I found myself principally and philosophically unaligned with the organization,” Dillard Smith said.

“I understood it to be the ACLU’s goal to delicately balance competing rights to ensure that any infringements are narrowly tailored, that they do not create a hierarchy of rights, and that we are mindful of unintended consequences,” she said in a statement.

“I believe there are solutions that can provide accommodations for transgender people and balance the need to ensure women and girls are safe from those who might have malicious intent,” she said.

“How can we ask these kinds of questions without being called a homophobe?” the video asks. “How do we prevent predators from preying on kids in bathrooms?”

A transgender activist, a biological male who goes by the name Cheryl Courtney-Evans, responded to the resignation by calling Dillard Smith “lazy,” “ill-educated,” and a “b–ch” who needs to sit down and “STFU.”

“What am I doing in a men’s room looking as luscious as I am, putting myself in danger?” the transgender activist asked.

Dillard Smith's departure will leave the ACLU shorthanded in the state and even shorter on diversity nationwide.

As of last November, she was one of the youngest ACLU directors in the nation, and one of only three African-Americans employed in that role in the progressive organization.